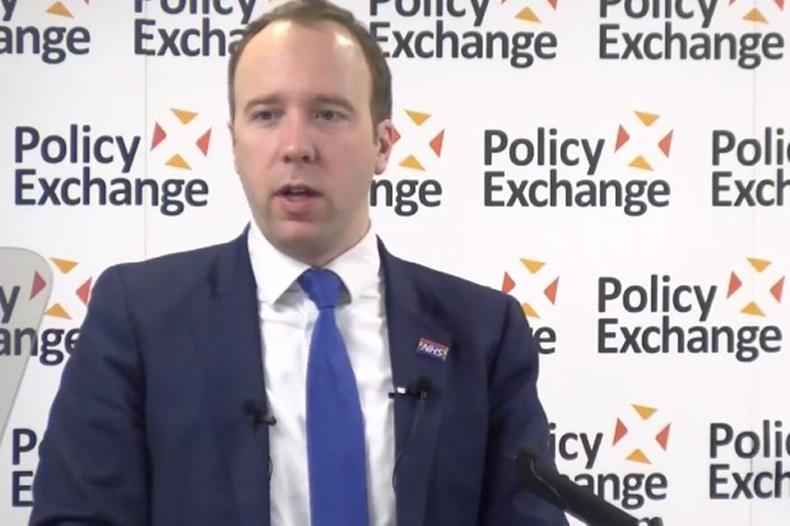 Matt Hancock: Pharmacies will become the “first port-of-call” for patients with minor illnesses

The health secretary pledged to “unleash the potential” of pharmacies over the next five years, during his first post-election policy speech.

Pharmacies will become the “first port-of-call” for “many patients” with minor illnesses over the next five years, Mr Hancock said at a Policy Exchange event yesterday (December 18), his first speech since the Conservatives won a large majority last week.

“There’s so much more that can be done in pharmacies and that they are capable of doing”, the health secretary added.

Referring to his party’s manifesto promise (see below), Mr Hancock insisted the government would “deliver that extra 50 million appointments in general practice within the next five years, both by expanding the workforce, but also by harnessing the power of technology”.

In what was presumably a reference to the Community Pharmacist Consultation Service in England, Mr Hancock said there are more than 10,000 pharmacies “ready to receive referrals from other parts of the health service” – a number that will “continue to grow”.

Mr Hancock’s speech follows Prime Minister Boris Johnson’s post-election promise that the NHS will be a “top priority” for his government.

What did the Conservative party pledge in its manifesto?

The Conservatives failed to mention community pharmacy in their manifesto, only discussing recruiting GP pharmacists. When asked for clarification on their community pharmacy policy, a spokesperson told C+D: “We will be boosting the amounts going into community and primary care by £4.5 billion.”

Other healthcare highlights in the Conservative manifesto included a promise to recruit 6,000 more pharmacists, nurses and physiotherapists to work in GP surgeries by 2025, with the aim of delivering 50 million more GP appointments a year. It has not yet set out a breakdown of these roles.

The party also pledged to “make sure patients can benefit from digital booking and consultations offered by phone, Skype or online if they want them” and stressed that the price the NHS pays for medicines will “not be on the table” when negotiating trade deals, in response to criticism from Labour.

What do you make of Mr Hancock's pledge?

‘Matt Hancock’s French pharmacy dream is just that – a dream’