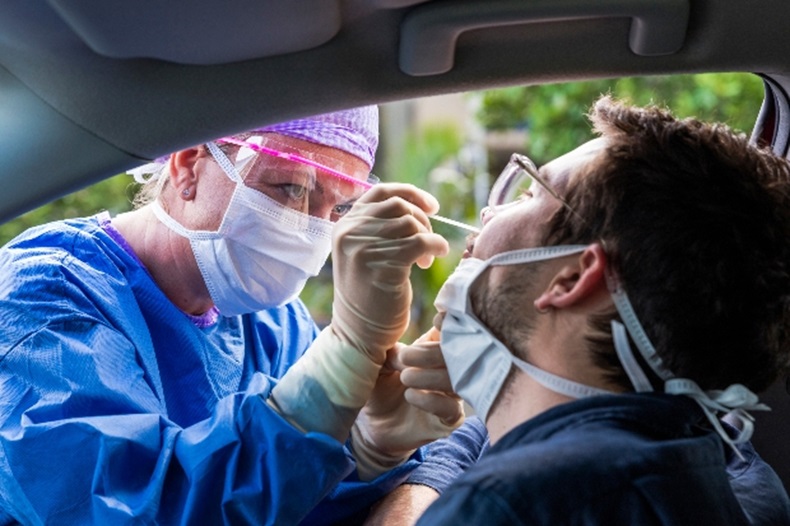 Community pharmacy professionals in England who are self-isolating with symptoms of COVID-19 can now get swab tested thanks to increased testing capacity, the DH has said.

The Department of Health and Social Care (DH) has expanded access to testing to more frontline workers, as well as symptomatic members of their family or household, it announced last week (April 17).

The polymerase chain reaction swab tests, which are used to determine if an individual has the virus, will allow key workers to return to their jobs “as soon as possible” if they test negative, the DH said.

Pharmacy teams in Wales have been included in the Welsh testing programme since March 18, and the list of eligible workers was expanded last week (April 18) to include non-NHS critical workers.

Community pharmacy team members who think they are eligible for the test should speak to their employer, who will receive information on how to book an appointment on their behalf, the DH said.

Information was shared with pharmacy contractors last week (April 18), detailing how their staff can access the testing, according to the Pharmaceutical Services Negotiating Committee (PSNC).

The PSNC added that a Care Quality Commission online portal “will be used to allow health and care staff, including community pharmacy staff, to book a test at one of the national test centres”.

The DH said that a new website will “in time” allow “eligible individuals to book a test directly”.

Where to get tested

Pharmacy staff can currently get tested at an NHS hospital or by driving to one of the DH’s drive-through regional testing sites.

The DH is also developing mobile testing units, which will be able to “travel to offer tests where they are needed”, and a home test kit to help people with symptoms test themselves and their family in their own home.

In response to a question from C+D at a press briefing last week (April 16), Professor John Newton, director of health improvement at Public Health England, said “we should stop talking about [who to] prioritise” as “we’re a point now where we have capacity to test”.

“How can you decide whether a tube driver is more important than a care worker or a community pharmacist?” he asked.

“My task [is] to make available the testing capacity that the country needs to respond to COVID-19. That includes providing testing for all key workers so that they can get back to work if they test negative and that absolutely includes pharmacists,” Professor Newton added.

When the new UK-wide COVID-19 testing programme was announced at the end of last month, the Pharmaceutical Services Negotiating Committee (PSNC) received confirmation that pharmacy teams in England would be given access to the antigen tests if they showed symptoms.

However, doctors and nurses working in intensive care units were initially being prioritised under the programme, along with their family members, the DH told C+D earlier this month (April 9). It added that the tests would be rolled out to all health, social care and other key workers as “capacity increases”.

Speaking on BBC Breakfast earlier this month, Toby Anderson, CEO of Lloydspharmacy’s parent company McKesson UK, revealed that 2,500 company employees were self-isolating at home, and called for all healthcare workers to have access to COVID-19 tests to allow them to return to work.

Do you welcome the DH's decision?

Community pharmacists to be given access to COVID-19 tests