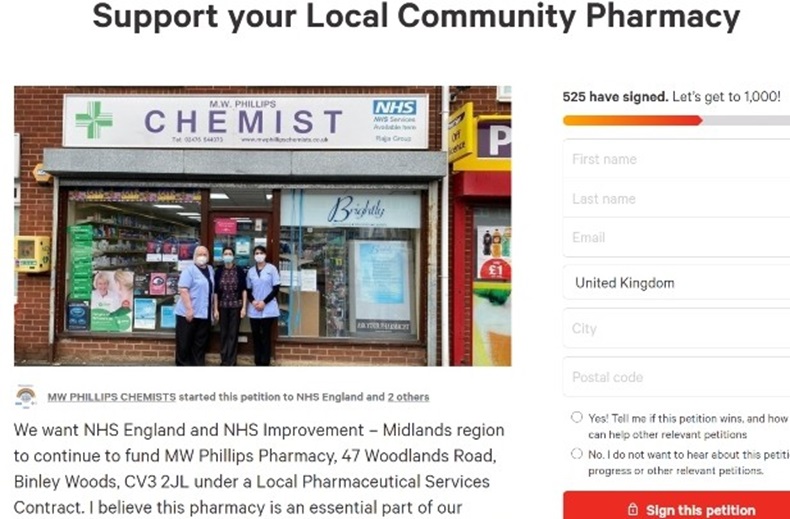 A Conservative MP has presented a petition in parliament to stop the closure of a pharmacy in the village of Binley Woods, Warwickshire after it lost its LPS contract.

Mark Pawsey, the MP for Rugby and Bulkington, presented the petition to prevent the closure of Binley Woods pharmacy MW Phillips Chemists before the House of Commons early this month (December 2).

Pawsey shared the news of an online Change.org petition – running alongside a paper version and together gathering 849 signatures from members of his constituency – in the Commons.

The petition describes the pharmacy as "a lifeline and hub to more than 3,000 residents" and said the removal of the local pharmaceutical service (LPS) contract was "deplorable". It urged the government to work with NHS England and Improvement (NHSE&I) to reverse the decision to withdraw the LPS contract.

It came after NHSE&I Midlands rejected the pharmacy’s application for an extension to its LPS contract, arguing that it had not “provided evidence of specific needs in the local population to provide the additional services that we would expect to see under an LPS contract."

An MW Phillips Chemists spokesperson told C+D yesterday (December 14) that the pharmacy had in its application “explained that we are much more than a dispensing service – we [vaccinated] over 300 patients in the flu season 2019/20, we offer locally enhanced services, medicines use reviews and the new medicine service too”.

“There is no other healthcare provision locally and the next nearest GP surgery is over three miles away with poor to no public transport,” they added.

Following the expiration of MW Phillips Chemists’ LPS contract on March 31, the pharmacy was given a six-month notice to terminate that would have seen it forced to close its doors on December 31.

However, an spokesperson for NHSE&I Midlands told C+D yesterday that a recent application from the pharmacy to be returned to the pharmaceutical list will be considered at “a future” pharmaceutical regulations services committee (PRSC). Pending this decision, the PSRC has “agreed to extend the current LPS contract for a time-limited period, to enable the continuity of services to the local community, while considering the application”, they added.

MW Phillips Chemists confirmed it has been given an extension of the LPS contract until February 28.

Mr Pawsey told C+D last week (December 4) that he had a personal interest in the case as he spent his first 17 years living in Binley Woods. The village, which has a significant elderly population, has a number of shops but only one pharmacy and will be hit hard by its loss, he said.

"They are asking my constituents to drive along a very busy road to a Boots on an out-of-town retail park. Or to go to a traditional pharmacy even further away."

He cited the important community role the pharmacy plays in a village with no GP surgery. "Only last month, the chemist instigated help for two people who needed hospital treatment when their medicine was not picked up," Mr Pawsey said.

The decision by @NHSEngland to remove the pharmaceutical contract from M W Phillips Chemist in Binley Woods is wrong. Today I presented a petition to Parliament on behalf of local residents calling on NHS England to reverse this decision. pic.twitter.com/5IM5FCKj82

“The pharmacy hugely benefits the village”

Asked to express their view by the NHSE&I pharmacy contracts team in September, the LPCs said they “wish to support the extension of the LPS contract and are of the opinion that the pharmacy hugely benefits the village of Binley Woods”.

“The importance of pharmacy provision has been particularly evident during the COVID-19 pandemic where pharmacies have remained open when other primary colleagues have not been available for face to face interactions in many instances”, the two LPCs said.

The continuation of MW Phillips Chemists’ LPS contract should also be backed on the basis that it is “supporting access to pharmaceutical services for the patient population and to ensure that local needs are being met”, they added.

Paul Salisbury, chair of Binley Woods Parish Council, told C+D yesterday that the parish council is “trying everything we can to keep hold of the pharmacy because it is our only link locally with the health and wellbeing of our community” and said removing it would have a "devastating" impact on the village.

Reaching the two pharmacies NHSE&I has said local residents will instead be able to access if MW Phillips Chemists were to close would involve crossing a very busy dual carriageway and would be a “peril” for the “elderly, infirm and young mums with small children to undertake”, he said.

Commenting on the response from residents, the MW Phillips Chemists spokesperson said “the local population has been fantastic and everyone is in support of us staying”.

A spokesperson for NHSE&I Midlands said it is expected that the pharmacy’s application to rejoin the pharmaceutical list will be considered by the PSRC “within the next couple of months”.

Have you come across many cases similar to that of MW Phillips Chemists?

APPG: Nearly half of contractors could shut their pharmacy in a year