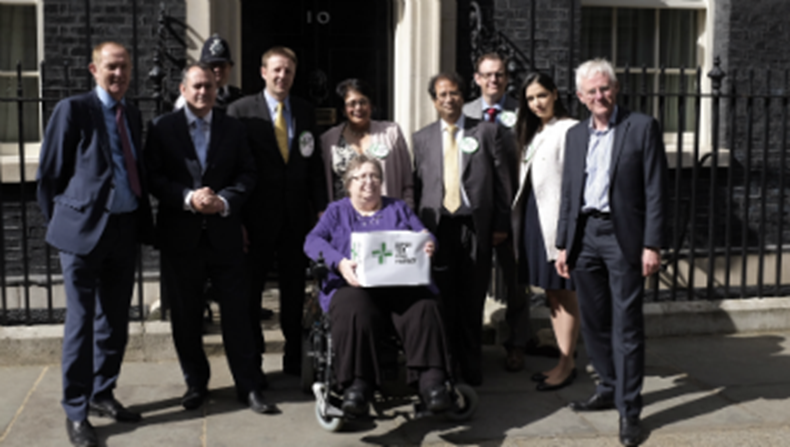 The petition against the pharmacy cuts was delivered to the Prime Minister by MPs, patients and NPA members

1.8 million people have signed the petition against the government's proposed pharmacy cuts

Politicians, pharmacists and patients met in Westminster yesterday afternoon (May 24) to deliver a petition protesting against the impending pharmacy cuts to Prime Minister David Cameron.

The National Pharmacy Association (NPA) petition was signed by 1.8 million people, which the organisation hailed as the “biggest healthcare petition ever”.

MP Michael Dugher told C+D he was hopeful the government would take notice of the petition, timed to coincide with the last day of a consultation into the cuts.

“The fact it is the biggest healthcare petition in history has got to count for something,” he said. “The industry has run a good cross party campaign to mobilise almost every community in the country.”

Mr Dugher also called for Conservative MPs to do more, because the impact of the pharmacy cuts would be “every bit as real” for them and “they ought to make the voice of their constituents heard loud and clear”.

Sir Kevin said he hoped the petition would be “a message to Number 10 and a message to the government that people are concerned about what could happen to their community pharmacy”.

“This will hopefully mean the outcome of [the funding consultation] won’t be as bad as some people are predicting,” he said.

Pharmacy Voice chief executive Rob Darracott said such a popular petition “would make [the government] think again about what they’re planning to do”.

“The understanding [among MPs] of what we’re doing and why we’re doing it is growing,” Mr Darracott said. “There is a degree of support from all parties taking this issue seriously.”

NPA head of corporate affairs Gareth Jones told C+D that the organisation was “delighted” with the support the petition had been given.

“We’ve got signatures still coming in – it shows how engaged the sector is with this campaign and how much support we have from the public,” he said.

“This is an attack on pharmacies and the public in socially deprived areas – while these proposals are still out the campaign goes on," he added.

What should be the sector's plan of action next?