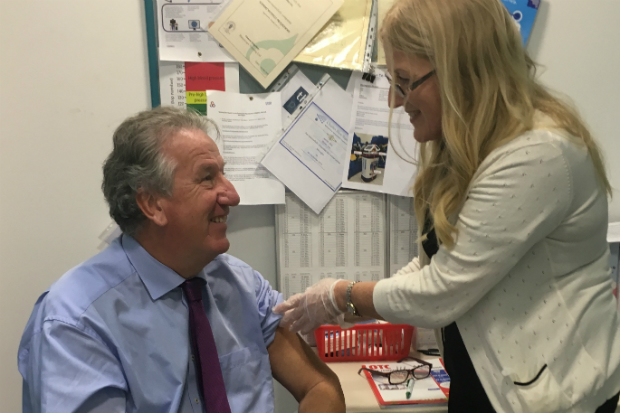 Pharmacy minister David Mowat visited two pharmacies in his constituency last Friday (September 16), and took the opportunity to have his flu vaccination in the process, C+D has learned.

In what is believed to be the pharmacy minister's first round of visits to local pharmacies since taking on the portfolio from Alistair Burt in July, Mr Mowat began by visiting Hood Manor Pharmacy, one of four premises in Warrington run by the Hub pharmacy group.

During his visit to discuss the future of the sector, Mr Mowat “took the opportunity to promote pharmacy-based flu vaccinations by having his own flu vaccination”, the Hub pharmacy chief executive Steve Jeffers said.

But Mr Jeffers noted that the minister was “understandably cautious about making any particular comments about pharmacy funding”, the CEO told C+D after the visit.

Two days before Mr Mowat’s visit, the government confirmed it will announce its funding "package" for community pharmacy in England in mid-October, to be implemented in December.

“I think [Mr Mowat] just wanted to understand what community pharmacy actually does,” Mr Jeffers said. “It was positive and I think he is keen to learn.”

Getting to know the minister on a “human-level”

While administering the flu jab, Hood Manor pharmacy manager Shirley Cox said she was “more nervous than I usually am”, but described Mr Mowat as “a very good patient”.

“It was nice to meet David and he fully appreciated the role that pharmacy now plays in the nationwide flu vaccination service,” she added.

“I also explained how our pharmacy team had raised funds for various local charities including the Warrington Wolves [rugby team] Foundation, as I know he is a keen supporter of the Wolves.”

Mr Jeffers said it was interesting to get to know the minister on a “human level” during his “good hour or more” visit.

After leaving the Hub pharmacy, Mr Mowat paid staff at Rowlands Pharmacy on Folly Lane a visit, and ended his day by opening a new Eric Moore Partnership Medi-Centre, on Tanners Lane, his parliamentary office confirmed to C+D.

What would you ask David Mowat if he visited your pharmacy?

Wholesalers on track to complete flu deliveries in two weeks