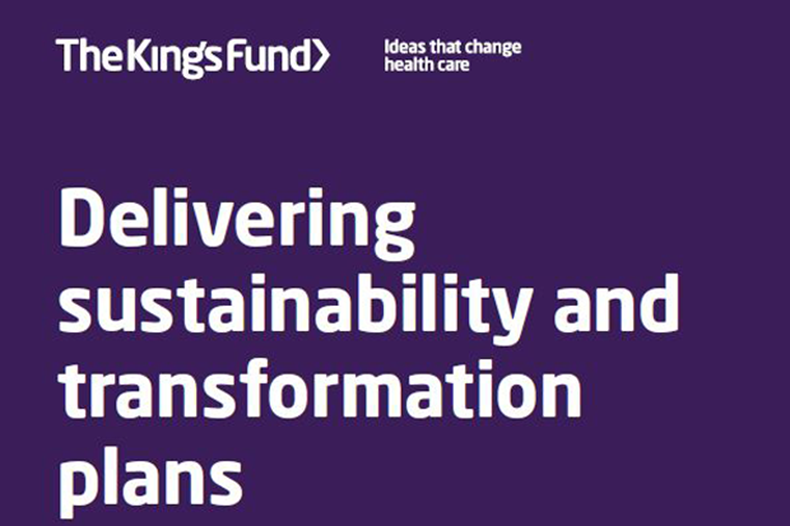 Local plans for the redesign of NHS services around England, known as sustainability and transformation plans (STPs), have proposed “some form” of electronic patient record that can map patients' interactions with health organisations.

In its analysis of the 44 STPs published today (February 21), think tank the King's Fund found an appetite for implementing shared patient records across different healthcare providers.

Jane Milligan, STP lead for north east London, told C+D at the launch of the King's Fund analysis that the STP aims to include community pharmacists in its patient record sharing system EMIS.

“That is a definite direction of travel,” Ms Milligan, who is also the chief officer of Tower Hamlets clinical commissioning group, said. “It is important for us to be really working with our local community pharmacists and making sure they have access to [patient] information. We are quite proactive in that.”

In its analysis, the think tank also highlights an initiative in Dorset – the Dorset Care Record  which enables information to be shared between health and social care practitioners across the STP.

The King's Fund also found that the Great North Care Record had “similar ambitions on a larger scale”. It aims to implement shared care records across four STPs in the north east of England and north Cumbria, covering 3.6 million people, the report said.

The think tank highlighted that ambitions to enable patients to digitally interact with health and care service “differ between STPs”. For example, Lincolnshire aspires to offer 95% of primary care patients e-consultations by 2019, it said.

Despite a national rollout, pharmacies in England have been slow to make full use of patient record system the summary care record (SCR). C+D readers cited problems with “clunky processes” and a “fear of the unknown” for the low SCR uptake levels.

Pharmacists have a "major role"

STP lead for Nottingham and Nottinghamshire Steve Pearson told C+D the local area believes pharmacists have a “major role to play in helping people get early advice” that could be “critical” in managing the demands on A&E.

“We’ve had conversations about how we can extend [pharmacists] roles,” Mr Pearson told C+D.

STPs were established to set out proposals for “redesigning primary care and community services” and to “deliver more services outside of hospitals and in people’s homes”, the analysis confirmed.

“These proposals invariably describe commitments to break down barriers between services and to develop care that is more integrated," it said.

The report also highlighted that GPs and primary care staff working more closely with “other community and social care service” are expected to reduce demand for hospital care.

What it means for workforce

Staff shortages were found to impact on the quality of services. Therefore, ways to deal with recruitment problems “feature heavily” in STPs, the King's Fund found.

Proposals for tackling workforce problems include collaboration between organisations within STP 'footprints'.

The report acknowledges that “controversy” has accompanied the development of STPs and stressed that an “urgent priority” is to extend involvement in the development and implementation of STPs, beyond the “relatively small” number of senior NHS leaders currently involved.

Chris Ham, chief executive of the King’s Fund, said ministers and local politicians should back NHS leaders in implementing “essential” and “long-overdue” changes to services.

Sustainability and transformation plans (STPs) are the local plans for delivering the Five Year Forward View, based on 44 geographical ‘footprints’ in England. Proposals for the 44 'footprints' were set out in October 2016.

There are nine STPs in the North, 17 in the Midlands and East, five in London and 13 in Southern England. See here for a full list.

Are you involved with your local STP?

Some pharmacies still missing £200 for not accessing records

How to overcome your patient records reluctance