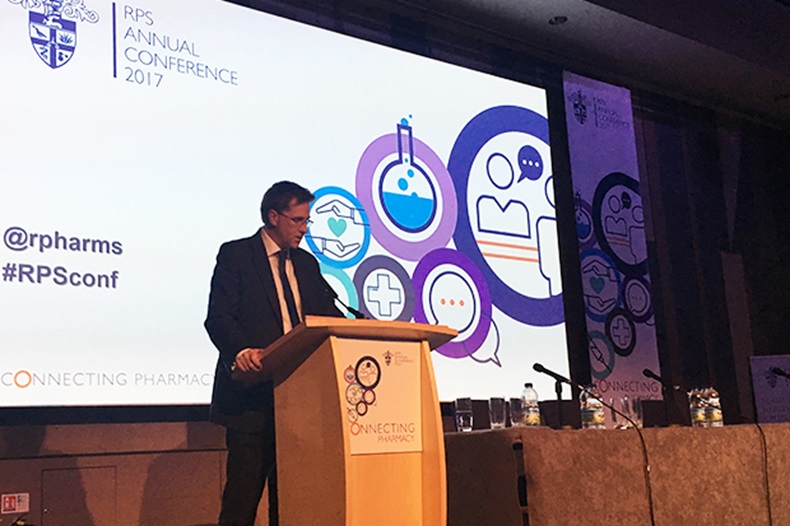 The pharmacy minister has praised healthy living pharmacies and the national flu service, while admitting the government has “not made best use of” pharmacy teams.

Steve Brine, who was appointed as pharmacy minister in June, told delegates at the Royal Pharmaceutical Society (RPS) annual conference today (September 4) that “my colleagues recognise we have not made best use of the skills and knowledge base that pharmacy teams have”.

“I am determined to correct this.”

“Pharmacists are part of the solution and we should remember we are part of one NHS community – primary and secondary care,” Mr Brine added.

He stressed that the Department of Health (DH) also wants to focus on integration within the community setting. “We want to encourage more people to use community pharmacy and reduce demand on local GPs and hospitals,” Mr Brine said.

“Thank you” for HLP uptake

Mr Brine said he was “delighted” to see that community pharmacy teams are promoting health in their communities, “which is shown by the growing number of pharmacies achieving HLP (healthy living pharmacy)” status.

“Thank you from us in government for working with us positively on that,” he said.

“I know the inclusion of healthy living pharmacy status within the quality payments criteria in the funding for 2017-18 has given…momentum [to] the spread of HLPs across the country,” he added.

“It is clear they are really effective.”

Mr Brine also referenced the nearly one million flu vaccinations delivered by community pharmacy teams last winter, and said “more is hoped in that regard”.

“By putting pharmacies at the centre of health improvements, we will show real benefits,” Mr Brine said. “We are encouraging the greater utilisation of pharmacy teams.”

“You want the profession to be highly regarded in government,” he told delegates. “As new minister, you absolutely have that. There is no question about that.”

What issues would you like to see Mr Brine focus on?