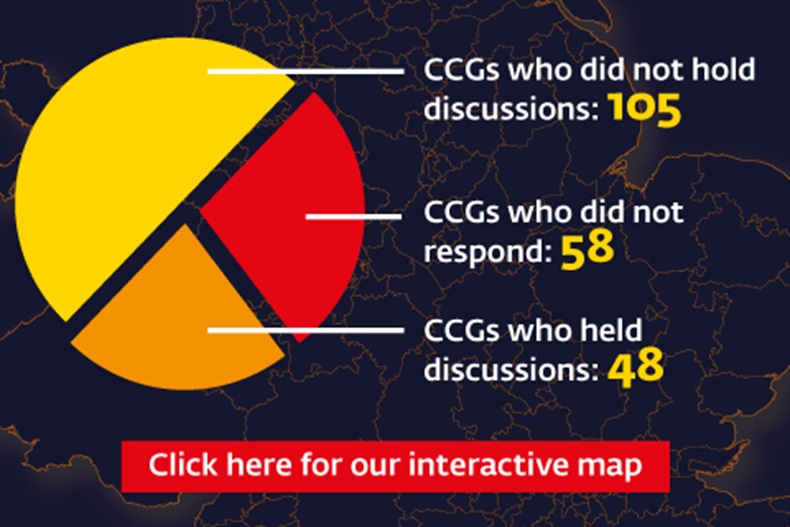 Exclusive Just 22 per cent of England’s 211 CCGs have met with LPCs to discuss commissioning services through community pharmacies, an exclusive C+D investigation has revealed.

Pharmacy Voice chief executive Rob Darracott said the figures demonstrated the challenge that LPCs face in engaging with commissioners, including local area teams and local authorities, as well as CCGs.

NHS England argued that GPs and community pharmacists needed to work together to improve patient care. Greater collaboration would "support and encourage a much greater degree of interprofessional collaboration", it said.

C+D has been collecting data under freedom-of-information requests from each of the four waves of CCGs since the first was authorised in December last year. Earlier findings, published in May, showed that 28 (28 per cent) of the first two waves of 101 CCGs had met with an LPC.

The latest findings from the final two waves of 110 CCGs to be authorised, show that only 20 (18 per cent) had met with LPCs before May to discuss the commissioning of pharmacy services.

LPC members told C+D this week that, in some areas where there had not been formal meetings, there had been engagement on an informal level.

Barnsley LPC secretary Thomas Bisset said the LPC had met with Barnsley CCG's chief executive and medical director on an informal basis and they were now waiting for the director of public health to organise a formal meeting between the various commissioners and service providers.

"We're quite happy that nothing has happened to date, because if we'd managed to meet [formally] it would have been with individuals rather than collectively. All the services will be carried on and the CCG chief executive is keen to commission new services," he told C+D.

"We have a seat on the area prescribing committee and the primary care forum through the LPC, so we have very good engagement with the CCG," he told C+D.

Mr Darracott added that the low number of discussions could be because there were more than twice as many CCGs as LPCs. Many CCGs that responded to C+D said Public Health England and local authorities had taken over the responsibility of commissioning pharmacy services.

North Kirklees CCG said that, although it had not held any formal discussions with LPCs, it was reviewing the enhanced services schemes for which it had taken responsibility. Liverpool CCG said it had faxed contractors to inform them it would continue to commission a minor ailments service from pharmacists.

"NHS England area teams are currently setting up their local professional networks for pharmacy, where medicines can be addressed and collaboration with CCGs can be developed," an NHS England spokesperson added.

See C+D's interactive map for a breakdown of which CCGs have engaged with LPCs and the services they discussed.

Think you're up to speed with the post-April NHS structure? Take our commissioning quiz and earn 10 per cent off an annual subscription to Update Plus, C+D's premium CPD content.