Update module 1770 covers risks, causes, management in community pharmacy and when to refer

Blood mixed into stools indicates that the bleed is likely to have occurred in the colon and may be caused by diverticular diseases, polyps, colitis or from a tumour. The blood may be darker red in colour, although it may be bright red if the bleed was sudden and extensive.

Bleeds from higher up the GI tract – for example in the stomach, ileum or duodenum – results in black, foul-smelling tarry stools (melaena) due to the action of digestive enzymes and bacteria on the blood. Usually, such bleeds are caused by peptic ulcers or oesophagogastric varices. Occasionally, due to an upper GI bleed being extensive and transmit time being reduced, red blood may be present in the stools.

Practice points: Most lower GI bleeding requires referral for further investigation. For uncomplicated haemorrhoids that produce minor localised bleeds, over-the-counter treatment can be recommended albeit within the licensing criteria provided by the manufacturer. However, for patients with a long history of rectal bleeding or those who have never been medically diagnosed with haemorrhoids, it is best to refer to confirm the diagnosis and rule out more sinister pathologies.

Bleeds in the upper GI tract are four times more common than those from the lower tract; they should be treated as a medical emergency and the patient urgently referred.

The most common causes of vomiting blood include a perforated ulcer, severe gastritis, oesophageal varices, severe gastro-oesophageal reflux disease or a tear in the oesophagus. Blood in the vomit may also be due to swallowing blood (for example, after a nosebleed).

Less common causes include swallowing poisons such as corrosive substances or heavy metals, or oesophageal or stomach cancer. Any blood that is not vomited will pass through the GI tract and will likely appear as melaena.

Practice points: Typically, vomiting blood is a medical emergency and requires urgent medical assistance. To reach a differential diagnosis, it may be useful for the patient to keep a small sample of the vomit (if possible) and give this to the medical team on arrival.

Blood in urine could indicate urethritis (which is often caused by a sexually transmitted infection such as chlamydia), a lower or upper urinary tract infection or kidney stones. In men, blood in urine could suggest an enlarged prostate gland. More sinister causes of blood in urine include bladder, kidney and prostate cancer; these tend to occur in older adults aged 50 years and over. Red-brown urine may also be due to chronic lead or mercury poisoning.

Practice points: The presence of blood in urine (including trace amounts that may just make the urine pink) requires referral for further investigation, even if it is associated with a self-limiting ailment such as cystitis. A false positive report of blood in the urine may be due to foods or medicines that turn the urine red. However, patients can be reassured that, under these circumstances, the colouration of urine is harmless.

Food and drugs that may turn urine red

Vaginal bleeding is considered to be abnormal if it occurs outside of the menstrual period (intermenstrual bleeding); before puberty; during pregnancy; after the menopause; or when menstrual flow is lighter or heavier than normal. Conditions such as hyperthyroidism, diabetes and polycystic ovary syndrome can cause abnormal menstrual bleeding patterns.

Infection of the pelvic organs, including pelvic inflammatory disease, may be associated with vaginal bleeding. Other less common, more sinister causes include sexual abuse, uterine fibroids, structural problems (such as urethral prolapse or polyps) or cancer of the cervix, uterus, ovaries or vagina. Furthermore, ovulation can cause mid-cycle bleeding or spotting. Contraceptives can cause bleeding; intrauterine devices may increase the likelihood of spotting or heavy menstrual flow.

Practice points: Typically, abnormal vaginal bleeding should be referred for further investigation, except if it is linked to a non-sinister cause such as the initiation of contraceptives or hormone replacement therapy. In these instances, reassurance can be given about this being a known side effect of the medication which should subside with continued use.

Heavy menstrual bleeding can potentially be managed in a community pharmacy setting with over-the-counter oral tranexamic acid, provided the criteria outlined by the manufacturer are met.

Although there are many potential causes, it can be difficult to reach a definitive diagnosis. The most common causes include a low-grade seminal tract infection (possibly with a co-existing urinary tract infection), blood disorders, recent urological surgery (eg cystoscopy, prostatic biopsy, vasectomy) or testicular or prostate cancer.

Practice points: Patients should be referred to their doctor, but reassured that the condition may well improve by itself (or with antibiotics/anti-inflammatory drugs). More sinister signs include prostate cancer or associated blood test being abnormal, testicle(s) feeling abnormal and associated blood in the urine.

The most common reasons for coughing up blood are a prolonged severe cough, a chest infection such as pneumonia and bronchiectasis. Less commonly, coughing up blood may be the result of a pulmonary embolism, pulmonary oedema (sputum tends to be pink and frothy), tuberculosis, cancer of the throat, trachea, lungs or oesophagus.

Practice points: Any blood in sputum (ie pink, red and brown/rust-coloured sputum) requires referral except if it is only a small amount of bright red blood that appears to be the result of a burst blood vessel following a bout of vigorous coughing. In this case, the patient can be reassured that it is unlikely to signify anything sinister.

Blood in the eye

Any trauma to the eye, including a sports injury, can cause bleeding (hyphaema). The eye may look as if it is filled with blood and there may be associated pain and visual disturbances. This differs from a subconjunctival haemorrhage, which results in an isolated red patch of blood in the eye. This is the result of a broken blood vessel leaking into the eye. It is usually painless and may arise from a bout of sneezing, coughing, eye rubbing or straining/vomiting.

Practice points: Hyphaema requires urgent medical attention. Patients presenting with a subconjunctival haemorrhage should be reassured they are self-limiting (10 to 14 days) and that no treatment is required. They should also be advised to see an ophthalmologist if the haemorrhage does not resolve within two weeks, or if other symptoms develop.

Blood in the ear

A perforated tympanic membrane (ear drum) is one of the most common causes. A fracture to the base of the skull can also result in bleeding from the ears, although this is rare and mainly occurs with severe head trauma. Malignant otitis externa may extend into the bones of the skull, causing the area to become prone to bleeding with minor trauma.

Practice points: All bleeding from the ear requires referral to the doctor for further investigation. Typically middle and inner ear examinations are beyond the remit of the community pharmacist.

Blood in the nose

Nosebleeds can be due to nose-picking, using excessive force when blowing, a minor trauma or environmental factors that cause the nasal epithelium to become dry and cracked. Occasionally, bleeding can be caused by a blow to the head, recent surgery and atherosclerosis.

Practice points: Nosebleeds are typically self-limiting and can be managed using standard first aid measures. However, the patient should seek urgent medical attention if there is significant blood loss, bleeding continues for more than 20 minutes, is due to serious trauma or is associated with breathing difficulties. Patients with frequent nosebleeds require referral for further investigation. Some medications, such as isotretin, can be associated with drying of nasal epithelium. This can be prevented by regularly applying Vaseline to nostrils to prevent cracking and bleeding.

Blood in the mouth

Recurrent and long-standing bleeding from the mouth may be due to oral cavity cancer. Malignant tumours within the nasal cavity, oesophagus, pharynx or larynx and cancers such as leukaemia may also result in bleeding from the mouth. It is possible that severe gastro-oesophageal reflux disease can cause bleeding, as would the consumption of corrosive substances or heavy metal poisoning. Vitamin C deficiency (scurvy) is associated with swollen bleeding gums, although this condition is very unlikely to be encountered in the UK.

Some infections, such as herpes simplex, that are associated with ulceration and blistering in and around the mouth can cause bleeding, as can aphthous ulcers. However, the most common causes of bleeding include dental caries, gingivitis and periodontitis.

Practice points: Bleeding gums due to gingivitis, incorrect/overzealous tooth-brushing or the presence of a small amount of blood resulting from minor trauma can be managed via self-care. It would be useful to educate patients on correct brushing technique and flossing, while also advocating routine appointments with a dentist. Oral hygiene may be improved with a mouthwash such as chlorhexidine (although hypersensitivity and the side effect profile may limit its usefulness).

All other bleeding in the oral cavity should be referred for further investigation. Typically, the dentist is probably the most appropriate practitioner to refer patients to in the first instance, unless you suspected the bleeding to be linked to medicine, underlying medical condition or poisoning.

Practice points: In the majority of cases, such patients will need referring back to their original prescriber for further investigation and monitoring. In addition, be vigilant about potential drug-drug or drug-food interactions that could further increase bleeding risks. Moreover, be aware of useful patient resources; for example, the National Patient Safety Agency (NPSA) produces warfarin guidance for patients that outlines various ways they can minimise the risk of bleeding and when to seek medical attention. 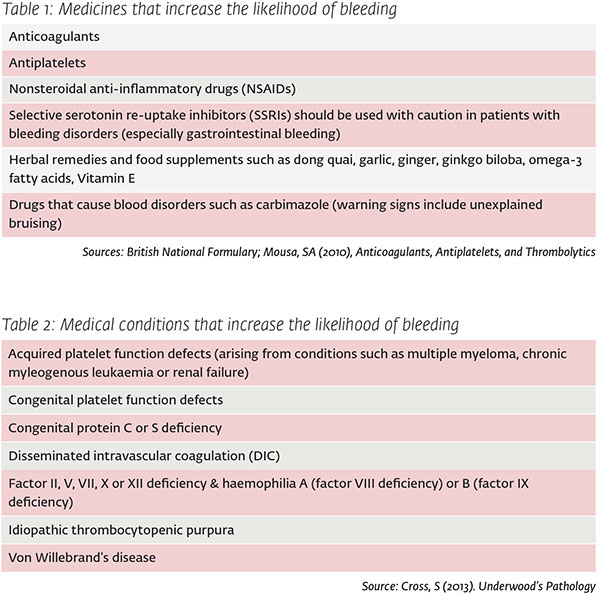 Tips for your CPD entry on unexpected bleeding

Reflect What does dark red blood mixed in with stools indicate? Which foods and drugs can turn urine red? What might be the cause of bleeding in the eye?

Plan This article contains information about unexpected bleeding, advice that pharmacists can give to patients and when to refer them. Bleeding that is discussed includes blood in stools, vomit, urine, semen and sputum as well as bleeding from the eye, nose and mouth, and abnormal vaginal bleeding

Act Read the Update article and the suggested reading (below). Update Plus subscribers can then access a 5-Minute Test and a pre-filled CPD logsheet at chemistanddruggist.co.uk/mycpd.

Read more about rectal bleeding on the Patient website
tinyurl.com/bleeding1

Find out more about vomiting blood on the NHS Choices website
tinyurl.com/bleeding2

Find out more about blood in the urine from the NHS Choices website
tinyurl.com/bleeding3

Revise your knowledge of causes of bleeding between periods on the NHS Choices website
tinyurl.com/bleeding4

Read the information about treating nosebleeds on the St John Ambulance website
tinyurl.com/bleeding5

Update your knowledge of any of the other causes of unexpected bleeding that are relevant to your practice. Identify any patients who might benefit from a patient consultation or MUR

Evaluate Are you now familiar with the causes of unexpected bleeding? Could you give advice to patients and do you know when to refer urgent conditions?