Everything changed for former MedicX and now Hub Pharmacy CEO Steve Jeffers last August. The 21-strong MedicX chain – one he had spent years building up – was put up for sale. But that wasn’t the end of Mr Jeffers’ involvement in the business. New investors bought nine of the former MedicX stores in the north of England this summer, and it was his job to rebrand them all.

It was no small ask. Having gone through the upheaval of finding investors, Mr Jeffers had to change the name, design and ethos of the pharmacies within just three months. So how did the team mange to achieve so much in such a short space of time?

The first step was to decide on a new name for the business. The final choice was the Hub Pharmacy – not because, as Mr Jeffers hastens to point out, the company is operating a hub-and-spoke dispensing model. Instead, the new name was intended to reflect the business’s goal to become a focal point of the community.

“[Communities] lost the banks years ago, they’ve been losing the butchers and the bakers, the post offices are going and libraries are closing,” Mr Jeffers explains. “What’s left in the local community is often the pharmacy.”

In keeping with this ethos, the Hub Pharmacy brand takes a back seat to the local name on the signage. Each pharmacy has been given a name that reflects its surroundings, Mr Jeffers explains. For example, the Tranmere branch was named St Catherine’s Pharmacy to match the name of the hospital site it was built on (see top), and the Chorley branch is called Chorley Pharmacy.

The change to a simpler name had additional benefits, too. “People always had trouble spelling MedicX,” Mr Jeffers admits. 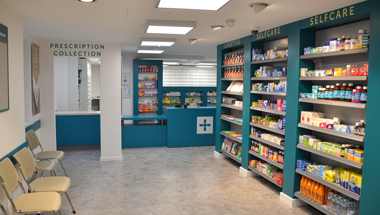 The Hub Pharmacy management team met with pharmacy shopfitting specialist T3 to work on a design concept. The end result is branches that are predominantly teal with flashes of bright red – markedly different from the bright orange hue that had become synonymous with MedicX.

However, the team felt it was important to retain the streamlined, clinical look of MedicX. Mr Jeffers explains that the sleek design was a deliberate decision, to encourage pharmacists to assume an increasingly service-led role. For example, the Hub Pharmacy’s Chorley branch has a semi-private area for handing out prescriptions, which easily allows the pharmacist to direct patients into consultation rooms, if necessary.

The design went far beyond just the premises, though. Everything from the team uniforms and stationery to bags and even the company’s IT system had to be completely overhauled to reflect the new branding, Mr Jeffers explains. Finding suppliers to complete each job could have been tricky, but the Hub Pharmacy team used local companies wherever possible to fit with its community ethos.

The changes incurred a significant cost. Mr Jeffers estimates that refitting and rebranding the nine pharmacies cost around £100,000. It may sound like a hefty sum, but Mr Jeffers is adamant that the results were worth it. He explains that most retailers will rebrand their businesses every three to five years to keep them fresh, and pharmacy should be no exception. “Pharmacy has got to go with the flow, otherwise you get left behind,” he stresses. 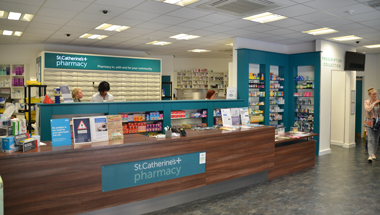 With the design in place, the final stage was to open the Hub Pharmacy branches to the public – it was make or break time for the new brand. Luckily, it proved the making of the chain and Mr Jeffers says that patients have been “very positive” about the rebrand. As a result, several branches have increased their dispensing volume, and Mr Jeffers says the Chorley branch in particular is “seeing increases”. The success has spurred the business on to expand, with the acquisition of a branch in West Kirby.

Mr Jeffers credits the staff’s “perseverance” and enthusiasm with making the rebrand so successful. “They’ve really gone above and beyond in several pharmacies just because they wanted to do it for their own [team], which is really nice,” he explains. “They’re all looking forward to progressing and expanding the business.”

And the community focus of the business has come naturally to employees: “The people that work for us understand they’re part of a bigger entity... but they’re very much focused on their own local community.”

Looking back, Mr Jeffers admits that the rebranding project was demanding but it has had its upsides – for one thing, the entire process has been very intellectually stimulating. “I’ve been a pharmacist for more than 30 years and the one thing I always tell our pre-regs is: you never, ever stop learning,” he says.

Posted on Sat, 09/01/2016 - 19:25
Surely the only way one could judge the treatment of pharmacists by Mr Jeffers and the company he is in charge of would be to speak to an employee pharmacist or one of their locums in private. The fall in wages and increase in workload is a market wide problem more influenced by people in Whitehall and on the boards of large corporations. It may well be that Hub is one the best places to work in the context of a generally deteriorating environment. From the article it looks like they are willing to spend money to make money, that is to say they are willing to take a risk and take on the big chains. Good luck to them, I will reserve further judgement until I have worked for them or speak to somebody who has.

Posted on Sun, 20/12/2015 - 00:00
So what is the alternative for your happy regular locums? Flipping burgers? Whilst I admit that you don't set the global sum please don't make out everything is fine when I was getting paid at least 30% more as a locum eight years ago than the current locum rate. Add in inflation and how are the youngsters going to cope? And by the way I have not been a locum for a long time as I saw the writing on the wall.

Posted on Wed, 16/12/2015 - 11:44
Feel free to apply via our website but given your negativity about the profession I doubt very much we would wish to employ you. We have many happy regular locums that work for us across the North West of England that appreciate the quality of the pharmacy team members they work with in the pharmacies and they are paid promptly. Its better up North :)

Posted on Wed, 16/12/2015 - 16:02
Very presumptious. What makes you think I'd apply for someone as snidey and untrutful as you.You're very fortunate there are people still desperate enough to accept low paid locum work. But beware the saying 'No situation is permanent'. I suspect you've already made your money(more power to you) but No need for me to be exploited.