Infographic: match the body part to the OTC painkiller

For this feature, Sasa Jankovich talked to pharmacist Varun Bitra, from Lloydspharmacy in Reading, about which OTC painkillers are recommended for pain in certain areas of the body.

Viewing this page on the C+D app? Click here to view the interactive infographic 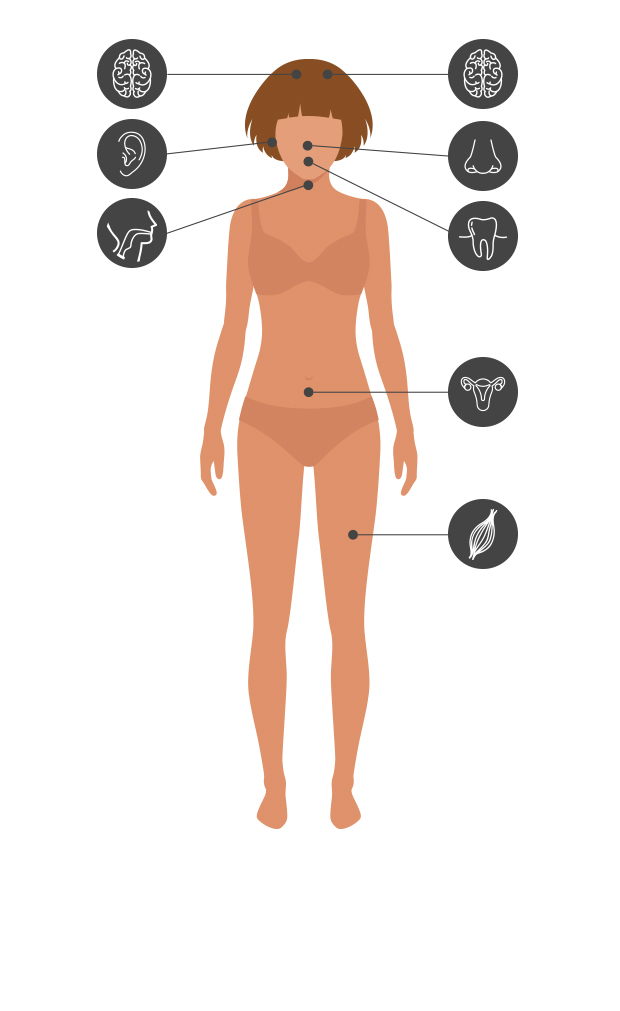 This is the most commonly experienced headache and can be described as self-limiting. Treatment eases the symptoms – which are often debilitating. Tension-type headaches may be due to stress, eye strain, muscle tension in the scalp or neck, posture, or dehydration. Paracetamol and oral NSAIDs can be effective and may be used in combination when required.

Earache can be a sharp, dull or burning pain in one or both ears, commonly caused by a viral or bacterial infection. Patients can buy acetic acid ear sprays or drops for minor infections of the outer ear, but inner ear infections should be referred. Paracetamol or ibuprofen can treat the pain, and placing a warm flannel against the affected ear may help. It is important to rule out trauma or presence of foreign bodies in the ear.

Sore throats are common and are often a symptom of a minor viral infection. Topical anaesthetics – in the form of lozenges, oral rinses and sprays (eg benzydamine hydrochloride) – can give rapid pain relief. Ibuprofen or paracetamol are also used to relieve sore throat pain, but will not act immediately. Flurbiprofen is an NSAID found in medicated lozenges that can help reduce pain associated with a sore throat.

The headache associated with migraine is often severe, and can involve throbbing pain on one side of the head, alongside other symptoms such as nausea, vomiting, and increased sensitivity to light or sound. Sumatriptan is a migraine-specific product available, and paracetamol or ibuprofen may be effective for some individuals.

Sinus pain is normally caused by an infection that clears up on its own, with symptoms usually passing within two or three weeks. Paracetamol and ibuprofen may help reduce a high temperature and pain. Decongestant nasal sprays or drops can help unblock the nose, if nasal congestion is a problem.

Toothache is pain in and around the teeth and jaws, usually caused by decay. Periodontal disease is a bacterial infection affecting the structures that support the teeth and can cause a dull pain. Paracetamol, ibuprofen or co-codamol can reduce pain in the short term, but patients should be advised to see a dentist as soon as they can to tackle the cause of the problem.

OTC gels containing local anaesthetics, such as benzocaine, may also numb the pain, but may have age restrictions limiting their use (see individual product packaging). Clove oil can also be applied onto the affected tooth to provide temporary relief.

Period pain occurs when the muscular wall of the womb contracts to encourage the lining to shed. This temporarily cuts off the blood and oxygen supply to the womb, releasing prostaglandins that trigger pain. This is often described as cramps in the abdomen, back and thighs. NSAIDs can help by reducing production of prostaglandins. Ibuprofen is considered first as it has the lowest risk of gastrointestinal adverse effects of any NSAID. If ibuprofen does not work, patients can buy 250mg naproxen tablets.

These terms are often used interchangeably and are common injuries with similar symptoms. They can be treated with self-care based on the PRICE technique: protection; rest; ice; compression; and elevation – while avoiding HARM: heat; alcohol; running; and massage.

Paracetamol is the oral analgesic of choice, while co-codamol can be used if paracetamol is insufficient. Topical NSAID products offer local anti-inflammatory action together with pain relief. Oral NSAIDs should be avoided in the first two days after an injury, because of the increased risk of bleeding, but can be considered after this period.

Paracetamol is a simple analgesic used to treat most aches and pains, and can also prevent or reduce fever. It blocks the production of prostaglandins. Side effects are not common, but some people have an allergic reaction.

Non-steroidal anti-inflammatory drugs (NSAIDs) such as ibuprofen are used for pain, headaches and fever. NSAIDs decrease inflammation, pain and fever by blocking production of prostaglandins. Pain relief starts soon after taking the first dose and a full analgesic effect should normally be obtained within a week – whereas an anti-inflammatory effect may not be achieved for up to three weeks.

If the patient does not get an appropriate response with a particular NSAID within these times, they should try another one. Patients may complain of side effects such as: nausea; constipation or diarrhoea; dyspepsia; and abdominal pain. NSAIDs increase the risk of cardiovascular events and, in some patients, may cause bleeding.

Aspirin is a type of NSAID, but is not usually prescribed for pain in the UK. Doses of 300mg three to four times a day can relieve pain. It should not be given to under-16s because it may cause Reye’s disease. Side effects may include indigestion, stomach pain and bleeding.

Codeine in combination with either paracetamol (co-codamol) or ibuprofen can be an effective painkiller – though OTC strengths are limited. Constipation is a common side effect of codeine use.

Caffeine can be combined with paracetamol or NSAIDs to increase the painkilling effect. It is believed that caffeine helps painkillers enter the bloodstream more quickly and efficiently.

If single agents are ineffective for pain relief, patients can take painkillers in combination – for example, paracetamol and NSAIDs.

As with any patient consultation, pharmacists helping patients manage their pain will need to use their professional judgement when determining whether a patient can be provided with advice, treatment, or referral.