Three pharmacies have been making the most of vacant gyms, sports clubs and a dance studio to provide COVID-19 vaccines

The number of pharmacies joining the COVID-19 vaccination programme effort in England is steadily climbing. In January, the first six pharmacies began to administer the jabs to patients. Since then, hundreds of pharmacy-led hubs have joined the ranks of England’s vaccinating venues, according to NHS England and NHS Improvement (NHSE&I) lists, reaching a total of 339 pharmacies today. This is a fraction of the 11,000-plus pharmacies in the country, but it forms a significant part of the national effort.

Most pharmacies do not have the space for administering hundreds of COVID-19 vaccines on top of their day-to-day services, but pharmacy teams are eager to join the national programme nonetheless. Many have had to get creative, hosting vaccination sites from hotels, former restaurants and places of worship, and others have made the most of sporting venues where usual activity has been paused due to the pandemic.

Last month, C+D spoke to three pharmacies that began vaccinating in March from a sports club, a gym and a dance studio. After weeks of ramping up the service, vaccinating hundreds, if not thousands of patients, April was set to be a slow month as a “significant reduction in supply” of vaccines put a pause on the national COVID-19 vaccination programme.

Nevertheless, the three pharmacy teams heading up the vaccination hubs in various sporting venues were eager to keep the momentum going. Here they share their experience of how the service has been so far.

“Patients are reassured when they recognise us” 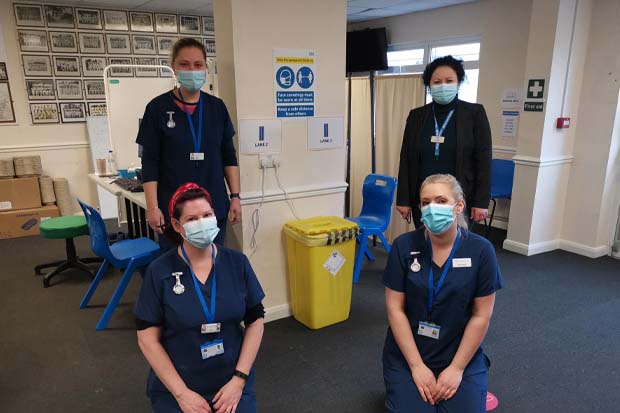 Day Lewis opened its vaccination centre in Burnham-on-Sea, Somerset, in the local BASC sports ground on March 20. The venue has lots of space for patients, plenty of car parking and is close to one of the multiple’s branches, regional manager Sally Farmer (pictured above, bottom right) tells C+D.

The pharmacy team has been administering the Oxford/AstraZeneca vaccine to around 800 people over approximately two days each week. They primarily administer vaccines over Fridays and Saturdays, a far cry from the original NHSE&I requirement of having the ability to administer vaccines seven days a week.

Ms Farmer says the NHSE&I sign-up and set-up process was very efficient and straightforward: “We managed to do it all in about a week really.”

This was not the case for all contractors attempting to join the programme, with some being denied access to it the first time around and one spending four months trying to set up a hub.

The news that vaccine shortages would limit vaccinations in April disappointed the team, who had worked hard to get the site up and running. “It is costing us as we are having to rent the venue while the shortage is going on, we can’t move all the equipment now,” Ms Farmer says at the time of the interview.

The vaccine centre operates mainly downstairs in the club building, where the bar is screened off, with four vaccination pods.

Some patients have been nervous about getting the vaccine after watching the news, but this is where the Day Lewis pharmacy team’s role in the local community played to its advantage: “It’s been good for some patients because they recognise us when they come to the COVID-19 clinic and it reassures them a little bit,” Ms Farmer says.

“We could vaccinate 6,000 a week if supply allowed” 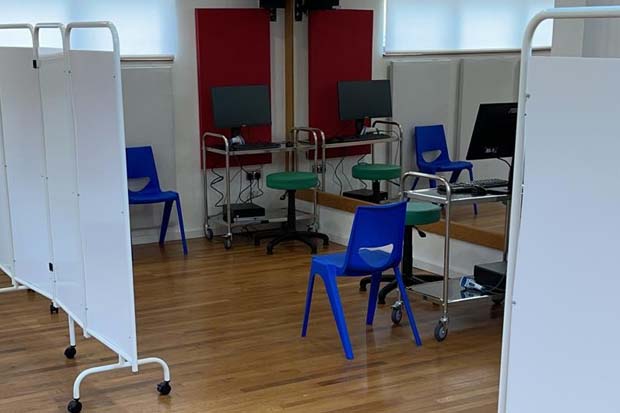 The Allied Pharmacies group is experienced in running COVID-19 vaccination centres, having opened seven sites in late January. The chain of 48 pharmacies, based in St Helens, Merseyside, opened its latest vaccination site on March 19 in Britannia Dance Studio, Stroud, Gloucestershire.

Suhaib Abdullah, Allied Pharmacies managing director, says his company chose the dance studio due to the proximity to one of its branches, Cainscross Pharmacy.

The shortage of vaccines in April did not come as a surprise as the pharmacy chain had handled similar supply issues at other hubs. “We’ve been going through ups and downs,” says Mr Abdullah, but the team is committed to paying to the continued use of the dance studio, for when vaccine supply increases again.

Initially, the chain experienced a small amount of vaccine wastage at its other hubs, as the options for whom they could vaccinate were restricted. Now that vaccine restrictions have eased, the Allied Pharmacies teams have no trouble using up jabs.

“We always have a list of people who are eligible towards the end of the day. We just pick up the phone and call,” Mr Abdullah says. “Within minutes of notice, they get in the car and come.”

NHSE&I opened up applications in February to pharmacy-led vaccine hubs with a capacity of just 400 jabs a week, down from the previous requirement of 1,000 jabs a week, but many of the new venues can administer far more.

“None of our sites has gotten anywhere near the capacity,” Mr Abdullah says. Finding pharmacists to lead the centres as smaller ones open may become more challenging in the coming months, he predicts.

Nevertheless, the benefits of being involved in the programme are clear for Allied Pharmacies. The response from patients has been very positive, with patients “delighted” to get their vaccine, Mr Abdullah says.

“Patients are excited it's finally their turn” 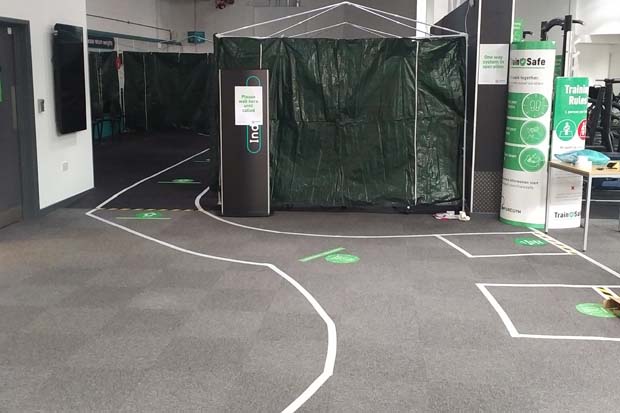 When PureGym put out a press release announcing it was offering all of its sites up for the COVID-19 vaccination effort, the pharmacy group jumped at the chance. Mr Rose tells C+D that PureGym has been “brilliant”, helping pharmacy staff clear away gym equipment and allowing the site to continue vaccinating even after gyms could reopen on April 12. Instead of opening its Nuneaton site, PureGym offered its affected members access to other local gyms, Mr Rose says.

The local community has welcomed the vaccination centre. “Patients are really happy, there is almost a ripple of excitement as they come in. Some are apprehensive about having the injection, but 90% of them are over the moon that it’s their turn. That’s the phrase that keeps coming out: ‘Oh it’s finally my turn.’ They are almost skipping around – there is a lot of positivity.”

The site administers around 1,600 vaccines a week, but Mr Rose says its capacity is up to 8,000 jabs. The amount of vaccines the team administer is limited by supply. “We would like to do seven days a week, but we don’t have sufficient vaccines to do it,” says Mr Rose.

Responding to supply issues is the biggest challenge in running the site, as a shortage means turning away patients who have booked an appointment, Mr Rose says. The opening hours vary depending on “sporadic” supply.

However, for Mr Rose, the difficulties are outweighed by the benefits of participating in the scheme: “The community love it, the patients love it, and it’s a really positive thing to do. At the end of the day, all our staff leave there with a real good feeling.”

The pharmacies making room for COVID vaccines in offices and marquees
26/02/2021 | 0 | Features
0 Comments
Question:
Has your pharmacy been approved to administer COVID-19 vaccinations?
Login or register to post comments