Fighting back after a fire

A fire devastated Abbey Pharmacy back in 2011 – but a major refit heralded the start of a better, more profitable era and earned its owners a C+D Platinum Design Award

Casting an eye over Abbey Pharmacy in Rotherham, the first impression is how smart, tidy and high-tech the dispensary is. The immaculate storage units, flawless workbench and absence of prescription bags falling off the shelves are immediately noticeable.

But the path to award-winning design – the pharmacy won third place and £1,000 prize money at this year’s C+D Platinum Design Awards in association with Ceuta Healthcare – didn’t run smoothly. Owners Andrew and Sally Porter first considered a refit after a customer survey indicated the lack of consultation room and small dispensary size were impacting on the business. Mr Porter was aware that the pharmacy was a “very traditional model” and that they had “outgrown” the dispensary, but recognised that a refit would be a major challenge.

In an unexpected twist, circumstances forced him to take the plunge. A fire at the pharmacy in December 2011 meant Mr and Ms Porter had to shut up shop for seven months and refit the premises. This would be the start of a large-scale project that involved careful research, frustrating setbacks and, finally, a unique transformation.

The shock nature of the fire left Mr and Ms Porter little time to plan the refit. Their starting point was to visit the winner of the C+D Platinum Design Awards 2012, Peter Buckley Pharmacy in Clitheroe. They immediately noticed a “level of calm” in the pharmacy that was “quite unusual”, remembers Ms Porter.

Taking inspiration from the Clitheroe premises, they decided to enlist the help of Keith Anderson, the designer behind Peter Buckley Pharmacy and managing director of Anderson Retail Consultants, to bring about their own transformation.

But this wasn’t the only learning point from their visit. Having observed how the use of a dispensing robot smoothed workflow in the pharmacy, the couple travelled to Holland and Germany to visit other pharmacies that used the machines and decided on a Consis B3 robot – an £80,000 investment. 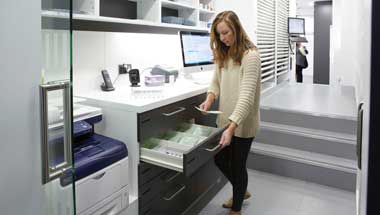 On his return to the UK, Mr Porter took two weeks to empty out the pharmacy with the help of a friend, staff members and his father. Problems arose when asbestos was found on the site – meaning the building had to be stripped back to breeze blocks.

This “challenging” period was made even more difficult when the owners struggled to borrow the full amount needed for a refit, and were forced to use their home and savings as tools to get the necessary cash. At the time, the pharmacy was only dispensing scripts for the small number of patients who did not want to use another pharmacy. Operating on this limited basis for seven months presented obvious difficulties. “It was a significant financial challenge for us,” Mr Porter stresses.

The couple also came up against pressure from their finance provider to reopen as soon as possible to control spend, he recalls, which resulted in the couple switching to another bank. He remembers this transition period of the refit as particularly tough, both personally and professionally. “I have a day job with the local clinical commissioning group, so I was working [there] three days a week,” he tells C+D. “I was burning the candle at both ends.”

Despite the stresses and strains, the couple stuck to their ambitious plans and invested £300,000 in transforming the pharmacy. They decided the new-look premises should have a strong focus on healthcare and cut back their retail offering to just 15 per cent of its previous size.

The decision to minimise the pharmacy’s retail element was “brave”, given the small size of the premises and the proximity to a local supermarket, large Boots branch and shopping centre, says Anderson Retail Consultants’ Mr Anderson. “We made a decision early on that, even though they were in the city centre, they were never going to compete on retail,” he remembers.

The windows of the shop were kept clear of the usual wall-length retail displays in order to let light into the premises. In their place, prominent signage was put on the outside to ensure passers-by were “fully aware” of the pharmacy, says Mr Anderson. “We wanted to shout out that this pharmacy was very healthcare-orientated and professional,” he explains.

The idea was to create an uncluttered look that enhanced the pharmacy’s professional image, stresses Mr Anderson, who believes this clinical, modern-looking feel suits the city-centre location. 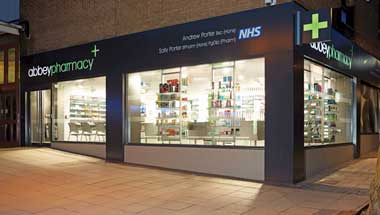 Now the work is over, the pharmacy owners are more than happy with the result. “It’s the best thing that has happened to us,” says Mr Porter. His wife echoes the positive comments. With an improved workflow and stunning dispensary, the reaction from patients has been “overwhelmingly positive”, Ms Porter says.

Not only has it been “heartening” to see loyal customers return, but the pharmacy has also attracted new business, she explains. “To have reopened and regained our customer base, and build on it, is an achievement,” she stresses. The pharmacy’s profit margin has increased from 29 per cent to 41 per cent since the work.

Ms Porter credits the focus on healthcare over retail with allowing the business to “move forward” by freeing up staff resources, floor space and money. Although she says it was heart-wrenching to move away from a model that had worked for a long time, this new approach is about running the business smarter.

Her passion is shared by Mr Anderson. As testament to the success of the refit, he sends more potential clients to this pharmacy branch than any other he has worked on. The couple manage it so well that it is “extremely tidy and organised” and kept in pristine condition, he says.

His words sum up why Abbey Pharmacy was a worthy winner of a C+D Platinum Design Award: “It’s probably one of the most efficient pharmacies that I’ve seen in the UK and probably the most healthcare-orientated.”

1. Take control of the change

Most people don’t like change but it is best to take control of it, rather than waiting for an event such as a fire to “push you into action”, says Ms Porter. “Sit down and look at your business profile and make plans when you’ve got a choice in that change,” she says. “Reflect and plan when you haven’t got an event that’s pressuring you.”

Look at a range of well-designed pharmacies, learn how they operate and how their features could apply to your business. “See how that fits in your pharmacy, because every pharmacy is different,” Ms Porter says.

3. Have courage in your convictions

Abbey Pharmacy was facing pressure from its bank to replicate the look of the pharmacy before the fire rather than undergoing a major refit to save time and money, says Ms Porter. When faced with such opposition, it can “restrain your potential”, she admits. But Ms Porter stresses that you need to stick with what your heart and head are telling you. “Find someone else that will support you to realise your ambitions,” she advises.

If you are changing the business profile completely, it is important to engage staff and support them through the transition, Ms Porter stresses.

When you’re undergoing a redesign, it’s worth being flexible about how you work and considering other ways of doing things, says Ms Porter. Abbey Pharmacy changed its alphabetical filing system for prescriptions to an index system after seeing how it worked in a pharmacy in Holland, she says. “It’s good to keep reflecting on the way you have organised the pharmacy and looking at ways toimprove it,” Ms Porter advises.

The pharmacy design must be based around workflow, stresses Mr Porter. “We sat down a lot and thought about processes,” he explains. “We knew what we wanted – where things were going to go when we opened the doors. You have to think, what is it I’m going to use? What do I really need? It really is down to the detail,” he says.

Posted on Mon, 22/12/2014 - 16:16
Thank you Sachin, From what I understand, and have seen in some pharmacies, an example of the index system is shelves/drawers being labelled 1,2,3,4 etc instead of A,B,C,D. When dispensed medication is placed on a shelf, the shelf number is noted at the top of the prescription which is then filed in alphabetical order. This helps to reduce the risk of errors as there is not a shelf containing lots of scripts with the same surname.

Posted on Mon, 22/12/2014 - 17:05
Oh gosh - I would encourage everyone to adopt the index system. It's so much easier to locate prescriptions, and to quickly tell if there's not one there. Also makes full usage of available space, and like Pooja mentioned, avoids clutter round common surnames. The extra 5 seconds it takes to locate is definitely worth it.

Posted on Sat, 20/12/2014 - 08:37
"When you’re undergoing a redesign, it’s worth being flexible about how you work and considering other ways of doing things, says Ms Porter. Abbey Pharmacy changed its alphabetical filing system for prescriptions to an index system after seeing how it worked in a pharmacy in Holland, she says. “It’s good to keep reflecting on the way you have organised the pharmacy and looking at ways to improve it,” Ms Porter advises." From alphabetical filing system to index system - please explain more... Good article Pooja, and well done Andrew and Sally.

Posted on Sun, 08/02/2015 - 13:53
Hi Sachin We use a locator code system. The 'ready scripts' drawers are labelled in columns (A1, A2, A3, B1, B2 etc): each drawers has a clear plastic wallet with the location code in the top right corner. When the dispensed/bagged medication is sited in a drawer, you take a wallet and place the prescription/other relevant information (e.g. CD card, fridge card, counsel card) inside: this is then filed in an A-Z index, by last name. Use of space is much more efficient and risk reduced, as the same surnames are not (routinely) filed together. Thanks for your kind feedback. Call us on 01709 377421 if you want more information or to visit us. Kind regards Sally Porter

Posted on Fri, 19/12/2014 - 11:03
A very good article on an inspirational story of triumph in the face of adversity. Congratulations on your success Andrew and Sally, and long may it continue.