Kent contractor Amish Patel led a complete redesign of his pharmacy in just three months. And, as if that wasn’t enough, he got married on the day of its completion and went on to take first place in the C+D Platinum Design Awards

Digging up your shop floor, halving your retail space and introducing a brand new way of working is one thing: cramming it all in so that you can get married the day it finishes and annoying your soon-to-be wife in the process is quite another.

But that’s what Amish Patel, owner of Hodgson Pharmacy in Longfield, Kent, managed to do last year. Throughout August, September and October, builders gutted the whole shop, temporarily removing all retail stock from the shelves, and added a huge dispensing robot.

The results are there for all to see; by working with designer Keith Anderson of Anderson Retail Consultants, Mr Patel has successfully created the “European feel” he was looking for. The shelves are clear and easy to navigate, the three consultations rooms spacious – allowing for a focus on clinical services – and the robot is now the centrepiece of the whole store, with patients watching it whisk their drugs to waiting staff in the dispensary. It’s easy to see why Mr Patel took first prize at the C+D Platinum Design Awards, in association with Ceuta Healthcare, last year.

But getting through a task this big was never going to be easy. Mr Patel had to take an “all or nothing” approach to the redesign to push it through in the short timeframe available.

The pressure to complete the work before his wedding day was a concern for Mr Patel. He admits that he would have done things differently if he’d had the chance. The tight timeframe left little room for manoeuvre ▶ and he was worried about leaving his staff in a brand new pharmacy with a “brand new way of working” while he went on his honeymoon.

Logistical challenges also came into play. “We had to accommodate the builders as much as we had to accommodate our business,” Mr Patel says. During the refit, the pharmacy stopped selling all retail products – limiting itself to prescriptions and a few P medicines – to enable the builders to finish the project in October. “It was difficult. No retail for three months gives you a big financial squeeze,” Mr Patel says.

Staff members were also forced to adapt and work around the builders. “The dispensary was on the back right-hand side for the first few weeks, then it moved to the left, then we moved to the front,” Mr Patel remembers. 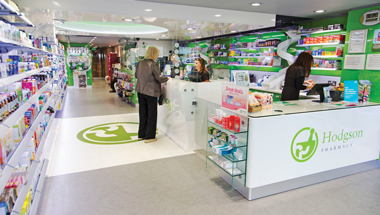 The upheaval could have easily have deterred patients, who had to brush past workmen to pick up their medicines. Accuracy checking technician Sachin Patel admits he was worried customers might choose to pop in to the nearby Lloydspharmacy instead.

But, remarkably, the pharmacy’s script volume did not drop during the refit, as patients stuck with the team through the difficult conditions. “I think patients were really loyal, they must love us enough, they kept coming in [despite] the dust in the place,” he says.

Once the dust settled, patients immediately took a shine to the new shop – especially the robot. One patient tells me the device is “unbelievable”. “You can just wait and watch it,” he says.

It’s also proven a hit with staff. Automated dispensing has given them much more time – and space – to interact with patients. The effects are being seen on the bottom line. Despite halving the retail space, the pharmacy is selling more items and – even more impressively – has seen its prescription volume jump by more than 10 per cent up to 11,000 items.

The impact of the new design should not be underestimated. The pharmacy now has a sleek, clinical look – predominantly white with the odd splash of green. The open dispensary and reshaped counter mean patients can talk to staff more easily. Today, the pharmacist is “always visible” – a stark comparison to the “heads bobbing around” that customers saw when the dispensary was at the back of the shop, Mr Patel says.

He believes the project – although hard work – has had far-reaching benefits. The team has been able to deal with the higher prescription volume without needing to recruit any extra staff members and, vitally, without any extra stress. “We’ve got to the point where everyone is a lot happier, everything is working very smoothly,” Mr Patel concludes.

Clearly, Hodgson Pharmacy’s redesign was far more than a facelift – it was a whole new start.

Posted on Sun, 18/01/2015 - 09:55
Warmest congratulations on your wedding,your award and your superb refit. I wish you continued happiness and success