Alistair Gray: It’s not about community pharmacists working in isolation

First up, it's Lancashire pharmacist Alistair Gray, who pioneered what he describes as the "world’s first" fully integrated hospital-to-community pharmacy referral system.

The Refer-to-Pharmacy (R2P) software allows pharmacists from both sectors to ensure patients get continuous care and support with their medicines, all the way from the hospital bedside to the community pharmacy counter.

The system has been embraced by East Lancashire Hospitals NHS Trust, with the cost of system setup and support being paid by the trust and two clinical commissioning groups (CCGs). The system not only allows the hospital to notify a local pharmacy if their patient has been admitted, it then automatically informs them when they have been discharged, along with a copy of their discharge letter.

In the words of Mr Gray, clinical services lead pharmacist at the trust: “It’s a way of connecting the hospital pharmacy with the patient’s community pharmacy.”

Once the patient leaves hospital, “they can be entered into a consultation scheme – such as the new medicine service (NMS) or a medicines use review (MUR), and have a meaningful conversation about what [medicines have been changed] and why.”

As well as improving adherence, it also reduces medicines waste back in community pharmacy, Mr Gray adds. “If we’d come across someone who had been admitted from a care home, we’d make a hospital admission notification so that the community pharmacist is aware they’d been admitted, [and] they can pause the dispensing process.”

Royal Blackburn Hospital, the first adopter of R2P, has seen a “0.8% reduction in readmission at 28 days for the same diagnosis on medical wards – the wards which produce the most referrals,” says Mr Gray. “Over the course of the year, that equates to about 80 fewer patients being readmitted. According to the Lord Carter report, it costs about £3,500 per [admission] to manage a patient, so it potentially adds up to quite a big sum.” 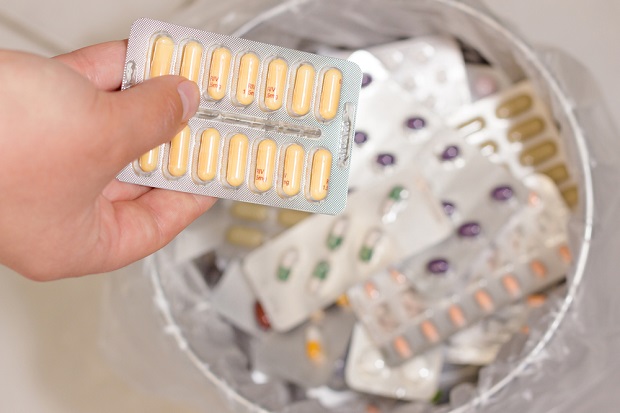 The scheme has already been shown to have a “big safety” benefit, Mr Gray says. Since March 2017, “we’ve had 62 patients where pharmacists spotted a prescribing error that the GP had unintentionally introduced”.

Mr Gray also calculates that in a three-month period, the system has prevented 220 items being unnecessarily dispensed, and freed up 77 hours of community pharmacists’ time.

From the hospital side, the R2P software is designed to be quick and easy to use, he says. “You can make a referral in about 15 seconds, so it’s not an encumbrance.” This has allowed the trust to refer an average of between 800 and 900 patients a month, with “a very high turnout from community pharmacists using that information”.

Mr Gray wants to update the software further. “We’re also looking at an outpatient module, so that someone who’s not a hospital inpatient, but visiting a clinic, can be eligible for a service at a community pharmacy as well.”

There are also plans to expand the initiative. “Sometime in the next month or two, it’s going to be going live at the next site: Leighton Hospital in Cheshire,” he reveals. “We’ve got a couple of other sites which are close to [signing up].”

So what is his message for pharmacists, commissioners and policy makers? “If you want to know more about what it would mean for your particular health economy, please get in touch.”

For more information about the scheme, contact Mr Gray at [email protected]

'The NPA will strive for unity, but I can't compromise'
09/02/2017 | 0 | Features
2 Comments
Question:
Are community pharmacists involved with any innovative schemes in your area?

We are using it on the Wirral. So far I've had two referrals both on MDS trays. On both occassions our requests when ordering the repeats for the updated trays has resulted in queries because the GPs hadnt updated their end, ( first time it happened they just plain ignored what we had requested and sent through the old stuff !!)

From a patient’s point of view, one can wonder why R2P is such an innovation.  It should be plain good practice [and common sense] that any hospital about to discharge an inpatient would enquire as to where electronically forward the discharge summary.  After all, 24 million patients, in England, do have a named community pharmacist.  And many [alas, no quantitative research on this] consider their community pharmacist as their first port of call when developing new symptoms/medical problems, seeking advice on medications or requiring immunisations and other healthcare services.

Where there is research, the problems of hospital discharge and weak, if not non-existent, GP surgery follow up are well documented.  So, the question remains as to why there is not a near automatic, following inpatient consent obviously, communication to community pharmacy on what medicines were deprescribed, changed or added during hospitalisation.

Where are the barriers? Who is overtly or covertly stopping the scaling up of such a… common sense practice which can only have rich outcomes in terms of medicine optimisation, good patient care  and value to the NHS?