Who's afraid of electronic repeat dispensing?

NHS England claims eRD could encompass 80% of all repeat prescriptions

Why are so few pharmacists using this much-touted dispensing system?

When the NHS introduced an electronic repeat dispensing (eRD) service for primary care in England back in 2009, it hoped to streamline management of the avalanche of repeat prescriptions generated every year (estimated at 410 million in 2015).

In an effort to raise awareness of its benefits, NHS Digital has launched a suite of tools and campaign materials to encourage pharmacies and GPs to adopt eRD.

But despite claims eRD could save 2.7 million hours of general practice time and potentially encompass 80% of all repeat prescriptions, current coverage stands at less than 13%. So what is holding people back?

Under a repeat dispensing service, a prescriber sets up a batch of prescriptions in advance with just one patient signature upfront, says Fiona McDonald, NHS Digital’s ‎clinical lead for digitising medicines.

Rather than reissuing 12 paper prescriptions to one pharmacy, under eRD the ordering process is taken care of, with information stored on the 'spine'. This information can be downloaded every month into the [patient’s] nominated pharmacy, so patients can pick up their medications from their location of choice.

“50% of the population has a repeat prescription, so that routine is repeated over and over for thousands of patients," she says. "It is something which could really be done in a much more efficient way, to save time and money.”

Alastair Buxton, director of NHS services at the Pharmaceutical Services Negotiating Committee (PSNC), says pharmacy would be wise to make use of the service, which has been touted as a way to increase dispensary efficiency.

As contractors look for additional operational efficiencies in advance of the funding cuts [in England], they may want to consider using the campaign materials to encourage patients and GPs to adopt widespread use of eRD,” Mr Buxton says.

So what's the problem?

Ms McDonald says she “doesn't think people are actually having problems with [eRD]; They just haven't tried it.”

Hesitancy to take advantage of the scheme may be a hangover from the days of paper repeats, she suggests. "It was very difficult to set up in the paper world, because you would – for example – be reissuing 12 bits of paper to one pharmacy, and then if you changed something halfway through, you had to retrieve all those prescriptions and reissue them."

"Whereas in the electronic world, you can cancel an item or whole prescription level and that will cancel all future issues of that item. So it becomes much easier." 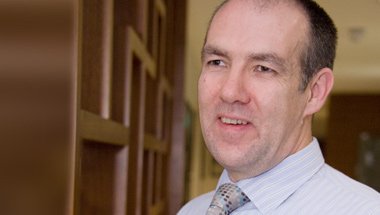 Fin McCaul, owner of Prestwich Pharmacy in Manchester and recently appointed North West regional representative at PSNC, was one of the first contractors to roll out eRD, back in 2012. While a handful of his "hardcore" patients "insist on collecting paper", the majority have moved over to eRD for their repeat prescriptions and have appreciated the benefits.

“One thing that's different [with eRD] is when we give prescriptions back to the patients, we need to check that they do require all of the medicines,” he says. “We will prepare the medication in advance of the patient visiting the pharmacy, check with the patient [if it's needed] and if not, we'll return it to the supplier,” he explains. This helps to reduce stock piling and wasted medicines in the dispensary.

Ms McDonald also stresses that eRD is the only dispensing model where the pharmacist is "mandated to ask the patient if they require all the medication, if they have been taking anything else, [and] if they have had any side effects".

Mr McCaul suggests that some of the reluctance to adopt eRD may be down to the different patient medication review systems that pharmacies operate. It is important to align the processes and systems with your local GP practices, so a patient doesn’t end up with two conflicting prescriptions, he advises.

Dr John Hampson, a GP in Bury and a clinical commissioning group lead for information management and technology, adopted the system in 2011. He says his patients now ask to be put back on eRD if they find themselves no longer under the system.

“We were one of the early pilot sites, so it's very much business as usual for us now,” he says. “We’ve set up a system whereby patients have their annual review and, if suitable, we set them up on eRD,” he adds.

Dr Hampson has an agreement with local pharmacies to notify patients when they need to arrange a new “batch” of electronic repeat prescriptions. The pharmacy staff drop a leaflet, jointly drafted by the pharmacy and the practice, into the individual's medication bag when they pick up their script – reminding them to stay on top of their eRD.

“A lot of this is down to good communication between GPs, pharmacists and patients,” he says.

How to get started on eRD

Invest in your team. “Make sure you have invested in really good training for all staff – reception, counter and dispensing – so they are all aware of eRD and how it operates, and can advise patients when they come in for a repeat prescription,” says Mr McCaul.

Preparation is key. Prepare prescriptions in advance – preferably seven days ahead. “Keep on top of your prescriptions, rather than waiting for patients to come back in and ask for them,” says Mr McCaul.

Start simple. Dr Hampson advises pharmacists “start with simple regimes”, rather than picking patients whose medications are still being stabilised. “For instance, [start with] patients on thyroid medication, or things that are unlikely to change, so that you can get hang of the process. Don't [initially] choose patients who are relatively unstable in their clinical situation, as that does complicate issues.”

Practice joint working. “Perhaps the most important: work closely with the surgery when they're first switching on [to eRD] and keep patients informed,” says Mr McCaul.

Don’t worry about written consent. It’s a common “myth” that pharmacists need written consent from the patient to go on eRD, says Ms McDonald. “I am aware that some standard operating procedures in chains and multiples might still have signed forms in place, but providing that the prescriber has had a conversation with the patient to explain what eRD is and they have said ‘yes that is fine’, [then] that is all the consent that is required,” she adds.

Repeat dispensing schemes are a burden on patients too
16/01/2017 | 14 | Views
16 Comments
Question:
What are your experiences of eRD?

I spoke to another surgery today, they said this system is responsible for a lot of the daily problems, and the GPs don't set it up correctly.
I agree with the comment -who on earth are these people pushing this ridiculous system.
It's fantastic in theory but there are too many variables / obstacles.
An other local surgery is just beginning it's folly into repeat dispensing, I advised the in house pharmacist spearheading the surgery project to speak to the other 2 local surgeries who are all but giving up on it.
But no..... they are passing ahead, and guess what..... they are going to put PRN meds on eRD!!!!!! funnily enough patients aren't collecting / getting their meds.
Anyone know who to contact in area teams or what ever they call them selves now to complain?

eRD does not work because surgery staff and gps don't set it up correctly, ever!

It amazes me that the surgeries seem to get plenty of 'training days' i.e. training time during work hours while we end up figuring it out in our own time - yet who ends up co*king it up?

For nearly every instance I have seen it is the local surgeries that have been unable to embrace this system, either through a lack of training, competence, or stubbornness.

This relies so much on the training and competence of the surgery. We have had a nightmare ! For 2 years eRDs have been issued by my surgery on 28day intervals for 56 days worth of Rx's. It took 2 years of meetings with the surgery for them to finally acknowledge that this was causing chaos. After many meetings the surgery decided to scrap RDs completely as it was easier for the prescriber than changing the interval to 56.

Agree with so much of above! Try to use the system but loads of problems on a daily basis- get paper and electronic scripts so some itmes in one place and others in another being just one of them! Would love to have one of these people who say it works come and see it working in practice!

In theory, eRD is a simple system that should work. In practice, there are too many things that can go wrong. It would appear that GPs don't completely undesrtand how the system works and that if there are changes to one item, the whole lot needs to be cancelled and re-issued. Patients don't understand the system - they come in early, late, or reorder prescriptions themselves

I am sure, if all involved totally undesrtood the whole process, and each others part in that process, it would be great. Shame about the hurdles

I have not seen any evidence to show it saves time, it fails for so many reasons, all of which increase my workload.
Patients order there own meds again as they forget they are on it, we end up on a wild goose chase.
Surgeries are putting prn meds on this, they send it in bits, we end up with multiple bags, patients go home without all meds, we get the complaint.
Patients don't collect on time, they forget to come for the meds, so we get buildups of multiple months.
Just to day, I found 3 separate scripts for atorvastatin for a patient, we don't seek to download them, they keep turning up. It's causing waste.
Sometimes when the the patient is due a new script, it's not there, despite checking all owings are done, all claims are claimed.
I can see why we are being pushed in to this scheme, it reduces the Drs work load. When it comes to there work load, just get on with it!
One of my local surgeries is scraping the scheme, they have seen the light, I can't wait to see it scrapped, but as long as the majority of GPs like it, it doesn't matter what pharmacists think or say

We are not afraid

All EPS scripts take longer to process than the paper FP10

Pretty obvious answer to that, Uma. Pharmacies are saving the GPs time and money and are working for free again. You couldn't make it up.

If GP's don't adopt the scheme then in all honesty there is little the pharmacist can do.  The same goes for EPS I'm afraid.  Unless the NHS force or incentivise GP's to use this efficiency for the good of patients, pharmacies and themselves then we will continue to see widespread variation in its implementation.

I think we are still needing to push past paper prescriptions and switch to a fully electronic service. Once Legalisation and systems are upgraded to include controlled medication, then there's very little reason outside of exceptional circumstances we would ever need R1s again.

Correct, my friend!  Likewise, eRD uptake in Cumbria is shockingly poor, despite the obvious benefits to everyone concerned, patients, prescribers and dispensers.