“There was going to be nowhere else local to put the surgery, so I thought: ‘Why not relocate [it] into the pharmacy?’”.

Mr Gale, the owner of Frosts Pharmacy Group, came up with an unorthodox solution when a local GP surgery in Oxford closed in the summer of 2017. He emailed the practice manager to introduce himself – and suggest they relocate to the pharmacy premises, working together for the good of their community.

His bold approach – to pitch to host the GP surgery in his redesigned pharmacy; complete the paperwork and admin to make the move happen; and apply for a business loan to fund the project – has paid off. The number of prescriptions dispensed by the pharmacy is on the up, his team has closer working relationships with GPs in the surgery – and the Marston branch of Frosts Pharmacy won GP Partnership of the Year at the C+D Awards 2018.

Coming up with the idea

The announcement that the Marston Medical Centre – which was just a short distance from the Frosts Pharmacy branch – would be sold to a vet, and the GP services split between two new sites across the city, was met with concern from patients and the pharmacy’s staff, Mr Gale tells C+D.

“Our patients were worried about having to travel two miles to another surgery,” Mr Gale says, which would have been a particular issue as the pharmacy serves a large number of elderly patients, and those with mobility issues. It wasn’t just the patients; Mr Gale says his staff were also concerned that the closure of the GP practice, and the potential loss of prescription income, could have put the branch under even more financial pressure.

So he contacted the practice manager to introduce himself, and tentatively suggest what he tells C+D was initially intended as an “urgent stop-gap measure” – to absorb the closing GP practice into his pharmacy in Marston. 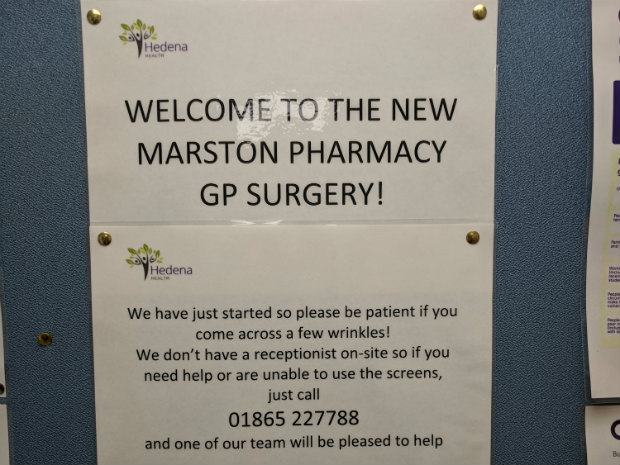 “I would have liked to have done it, but never thought in a million years it would happen here,” he says. But the Hedena Health medical group, which owned the surgery, was receptive to Mr Gale’s tentative proposal.

Putting the plan in motion

To firm up the plan, he had to apply for change-of-use planning permission, and get buy-in from local councillors to approve the paperwork in two to three months – a speedy approval by local government standards. “Everyone wanted it to happen, but I was the one taking the risk,” Mr Gale says. This also meant applying for funding from a bank, which was “very helpful” in extending him a loan to fund the “terrifically expensive” project.

“It’s definitely been a stressful situation to get it done on budget,” he says. Financially it’s been really challenging, but the pharmacy would have been worse off had we not done it. It’s protected the business, as well as the surgery and the local community.”

It took about a year from his first contact by email to the GPs moving in. During that time, the pharmacy underwent a six-week rebuild while the branch remained open – which Mr Gale describes as “a major feat”.

He credits his “very strong” pharmacy manager, Noha El-Gamal, who he says kept a ‘can-do’ attitude during the rebuild that meant his “amazing” staff “took the lead from her”. “It was a magnificent effort from everybody,” he recalls.

During the refit, Ms El-Gamal tells C+D she and her staff had to constantly move stock around the dispensary and the pharmacy to accommodate the builders, took turns on a cleaning rota, and juggled additional work by liaising with colleagues in a nearby branch who helped out during the “tricky periods” when her staff were on annual leave during the summer – all while providing services in just one consultation room.

“At times, it was a logistical nightmare,” she admits. “At the start of the building work the staff were not very happy about the dust, noise and upheaval, and at times because of the reduced space there were long queues of patients waiting, which can be overwhelming,” she recalls. “There was a process of adapting, but it’s been positive for us.” 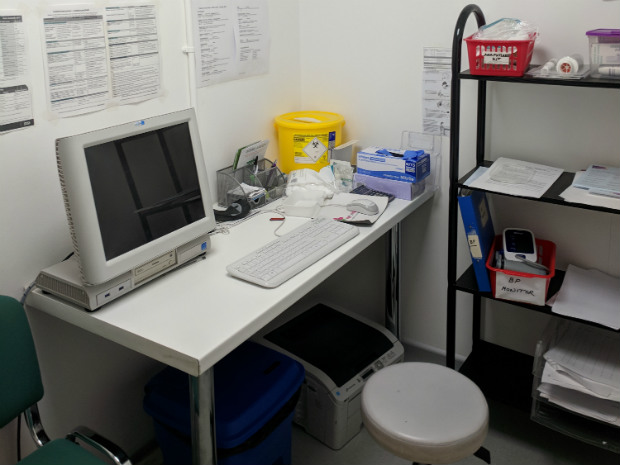 In essence, the redesign “chopped the shop in half and rebuilt the back”, Mr Gale explains. The pharmacy now has five consultation rooms, where it previously had two. Three of the rooms are used by the GP practice for surgeries, and two are used by the pharmacy for travel clinics and other services. The surgery runs sessions from the pharmacy premises every day, with doctors and nurses from the practice.

Having GPs and nurses present has provided patients with a vital community service, as well as increased footfall and prescription income, which is “steadily on the rise”. But more than this, Mr Gale says the partnership has greatly improved the relationship between pharmacy and surgery staff.

“It’s been a year and it’s taken the [doctors and nurses] a long time to get used to working here – there are some issues because they don’t have the back-up they would have in a surgery,” he admits. But, he says, “they are getting used to it, and now the doctors are very interested in using the pharmacy more”. 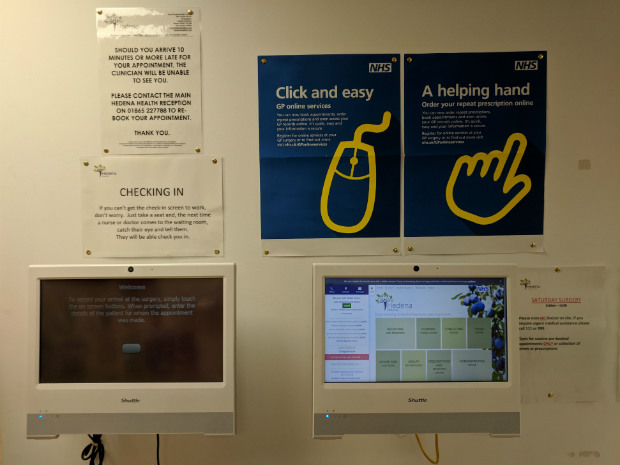 Currently patients book themselves in when they arrive for appointments (using the booking system pictured above), but pharmacy staff are often called into action to help.

“We’re discussing with them the possibility of employing someone jointly to facilitate the process of booking in – at the moment, there’s no receptionist, and for our staff it’s quite a lot of workload. We would like for our staff to be able to book people in for appointments; now people have to ring the surgery to make an appointment to see a doctor or nurse who is in surgery here,” Mr Gale explains.

He sees this as the next logical step in this award-winning partnership, as, he says, “that’s what we do here in the pharmacy – we help and connect people”. 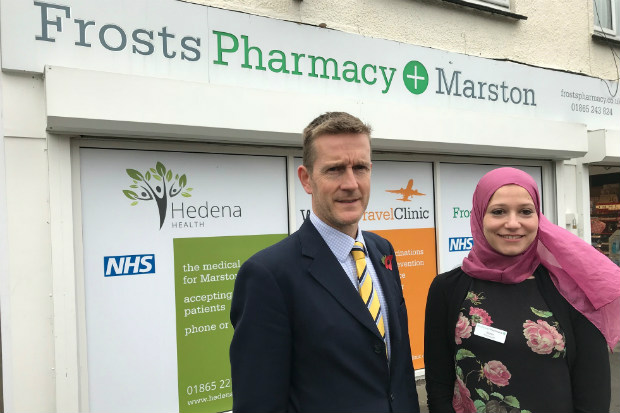 Ms El-Gamal is pleased with the partnership so far. “It’s an evolving process for us – I don’t know of any other GP surgery in a pharmacy, so it’s a different model of service provision,” she says.

While Mr Gale is certain he made the right move to build a partnership between the pharmacy and the GP practice which, given the premises-sharing contract is a five-year commitment, looks set to be a long-running one.

“I’m really pleased we did it, and I feel it’s the beginning of something. Doctors and pharmacy staff should work together and depend on each other. I think the major lesson I’ve learned is: it pays to talk to your surgery and stay in touch with them.”

Could you win the C+D Award for GP Partnership of the Year in 2019? Entries for all 14 categories – including the new Locum of the Year Award – are now open, so find out more and enter below.

It's an interesting model. I'd like to this level of synergy more widely spread. One big building for all your healthcare needs.

‘working together for the good of their community’ or move into my pharmacy and save my business as I’ll get all the prescriptions now.

Its a very fine line. NHS GP's cant really direct prescriptions to a pharmacy. This is taking it to another level!