The survey on pharmacy financial pressures was completed by 238 contractors

The morale of independent pharmacy teams has dropped and pessimism is increasing in the face of ongoing financial pressures, analysis of an NPA survey has revealed

Responses to an NPA survey – seen by C+D – are now the latest evidence of how tough working in an independent pharmacy has become.

The NPA's survey on pharmacy financial pressures, which ran from December 2018 to January 2019 and passed to the government in April, was completed by 238 contractors in England. Four in five (79%) said the morale of their pharmacy team was lower than the previous year.

Several told the NPA they are working flat out, but are still unable to make ends meet. One contractor said they “have been chronically ill with anxiety for two years, but can’t afford any time off”.

Another said: “This is not sustainable. The patients are worth the effort, but I have never felt so undervalued by the NHS.

“I’m busting a gut to give my best, but when I see concessionary prices way below the actual cost of the medicines, I get so cross. I’m treating patients out of my own pocket.”

Contractors are losing faith in community pharmacy, the NPA survey reveals, with nine in 10 respondents saying they are less optimistic about the prospects for the sector than a year earlier.

It’s not only the workforce that can suffer, but also planning for the future – something that the certainty of the five-year funding deal will hopefully alleviate. 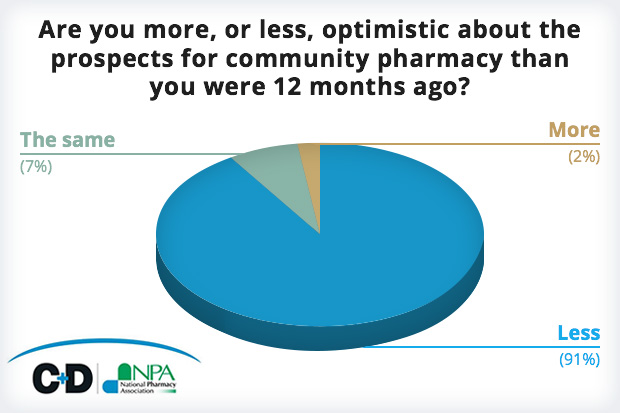 One pharmacy owner told the NPA they are “depressed about my future and retirement”.

Another said: “The poorly rewarded practice [in pharmacy] has a huge toll on mental wellbeing and family life. This is causing a lot of unrest and discontentment.”

One respondent explained the knock-on effects of a team trying to keep an independent pharmacy afloat. “I’ve had enough. Having cut staffing levels to maintain profitability – although I made a loss this year – everyone is working flat out. I have no time to do paperwork.”

“We are upgrading our computer system and intend to invest in automation to try to make our service fit for the future, but it is difficult to put a business case together for further investment,” said one contractor. “The future looks very bleak.”

The survey results also suggest that profit is down across almost every pharmacy, with 97% saying they took home less than two years ago, while 64% say they put their own money into the business last year.

With sinking morale and dwindling profits last year, the jury is still out on whether the new funding contract – and its promise of a shift to clinical services – will provide any respite for England’s independent pharmacies. 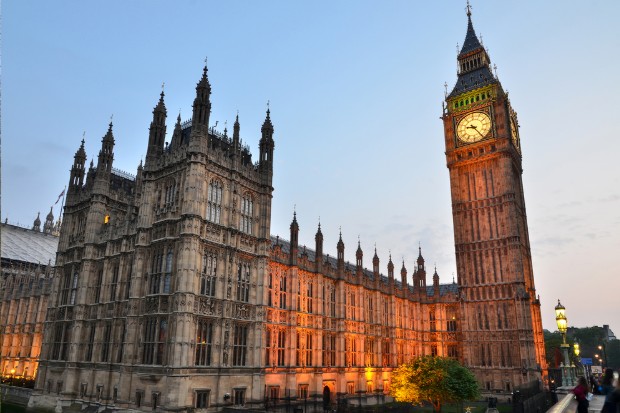 Find out more about the event, and share your own experiences with C+D’s features editor by emailing [email protected],or tweeting @ChemistDruggist.

‘My pharmacy's cashflow has become a diabolical juggling game’
09/08/2019 | 21 | Views
7 Comments
Question:
How is the morale of your pharmacy team?

I really dont know how the large chains are just swallowing this contract. Why on earth are they not more vocal in the cuts in funding and the state of NCSO products??? There must be something behind this for nobody to speak/lobby this current system to the government.

You know what the funny thing is, Well pharmacy manage to source pivmecillam GENERIC??? Lloyds pharmacies are able to get out of stock products when I cant as an independent pharmacy that uses AAH!?!? I looked at the LIVE stock system for naproxen back when they were short, none in stock, phoned lloyds, they had tons. Weird.

There is certainly something going on that is very very fishy in these large chains owned by their wholesaler.

The branches of wholesaler-owned pharmacies get automatically sent “excess stock” when shortages are on the horizon. Standard Practice sadly.

A very good point. But who?

Something fishy going on behind the scenes? Get ready to have your comments deleted. Read into that what you will.

Jobs are being lost, and huge cutbacks are meaning that pharmacies are now struggling to keep their heads above water financially. Factor in a massive increase in workload and then my only question would be who are the 1% who now have higher morale? Surely this must be the dispensary robots? Their future would seem to look quite rosy.

I'm assuming the one thumbs down can't like the word 'crap'. They can't believe that the deal will be anything other than said crap, surely?