'The NPA will strive for unity, but I can't compromise'

Mr Strachan: The cuts campaign has moved into a new phase

Almost a month to the day after the National Pharmacy Association (NPA) announced it was parting ways with Pharmacy Voice, chairman Ian Strachan tells C+D it is “hard to gauge” how the separation will impact the lobbying group.

As it turns out, Pharmacy Voice’s fate had already been sealed. Three weeks after C+D sat down with Mr Strachan to get a behind-the-scenes insight into the relationship, and the reasons behind the split, Pharmacy Voice announced the organisation could “not continue” beyond 2017 – when the NPA’s funding will come to an end.

“It was a logical and inevitable consequence,” the NPA told C+D following the disbandment announcement, something Mr Strachan did not let on during his interview at the NPA’s headquarters in St Albans last month.

However, he stresses that the decision to end the funding agreement with Pharmacy Voice – formed of the NPA, the Association of Independent Multiple Pharmacies (AIMp) and the Company Chemists’ Association (CCA) – was influenced by a range of factors.

“Contractually, it was the right time,” Mr Strachan tells C+D in the NPA’s board room. “We were in a three-year term with Pharmacy Voice, and if we were going to pull out of that coalition, then we had to serve notice by the end of this year.

“[Prior to the decision] we had a couple of days on the phone ringing pharmacies and sector groups, and their reaction was just, ‘OK, thanks for telling us’. They felt it was the right thing to do.”

This appears to run contrary to the 61% of C+D readers who branded it a "backwards step for the sector", but Mr Strachan puts the comparative apathy of NPA members down to “pharmacy politics”.

“I know before I went into [pharmacy representation], it wasn’t something I followed very closely. You’re too damn busy to follow all this stuff unless you’re in the bubble of it,” he explains. “I don’t think in the eyes of the average member there is much to worry about.”

The NPA has stressed that the joint work developed over the years with Pharmacy Voice – including the Community Pharmacy Forward View, the ongoing working groups which have pushed the agenda on patient safety, and the upcoming EU medicine scanning legislation – will continue.

The two organisations will remain intertwined until the funding agreement terminates at the end of the year, and Mr Strachan says he “reflect[s] positively” on their relationship.

“We will always strive for unity,” he adds. “But I cannot compromise.”

“We didn’t deserve the injustice of the cuts” 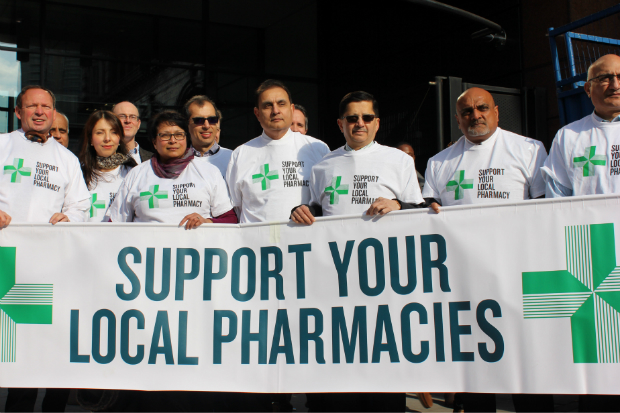 The Pharmacy Voice announcement may have dominated the headlines for the past few weeks, but it was the NPA’s role spearheading the campaign against the pharmacy funding cuts in England last year that really made waves.

Now the cuts have come into force – despite the pleas of more than two million pharmacists and patients in a petition the NPA oversaw – what is left to fight?

“The campaign has moved into a new phase,” he says, adding that if he has learned anything from the funding cuts, it’s that community pharmacy needs a better strategy. “Our [agenda] has to be different. We as a sector can either react to other people’s agendas or we can create one of our own.”

Of course, the NPA does have one more weapon in its arsenal: a High Court case – scheduled for March – which will challenge the “disproportionate effect” the cuts will have on certain patient groups.

“We have a duty to do this,” he explains. “We’re a leadership body and part of the job – no matter what the adversity – is to give people hope. If it doesn’t come to anything, we’ve given it a good go. Hope is important for people now.”

Mr Strachan describes the 12% funding cut as an “injustice” and one “members didn’t deserve”. But he warns of other challenges on the horizon that could have a UK-wide impact – not least on the four pharmacies he owns in the north west – including the ‘Amazonisation’ of community pharmacy, changes to pharmacy regulation, the push for hub-and-spoke dispensing and the digitisation of healthcare.

“There isn’t going to be a second chance,” he warns. “If we don’t shape and influence the agenda, then the [pharmacy] game could be up in the next couple of years.”

“The one thing that really gets to me…”

Throughout the interview, the proud northerner remains relaxed and composed, and constantly exhibits his commitment to “do right by [NPA] members”. It is only when C+D touches on pharmacy minister David Mowat’s repeated call to recruit 1,500 more “clinical pharmacists” into GP surgeries by 2021 that we get a glimpse behind Mr Strachan’s cool exterior.

“That really gets to me. This distinction between a ‘clinical’ and ‘community’ pharmacist is completely unfounded,” he stresses. “We never distinguish between doctors in hospitals and GP surgeries in that way. We never say, ‘That guy in primary care is just a doctor, not a clinical doctor’.

“[Mr Mowat] clearly believes we’re not capable of delivering [the health] agenda, and in a digital world – of course we can.”

After a successful year of campaigning up and down the country and lobbying the government – which Mr Strachan argues caused the “pause and rethink” on the expansion of its the hub-and-spoke model – the NPA’s task this year will be to help change opinion at the upper echelons of government and the NHS.

“In the government’s view, pharmacists have failed some clinical milestones and the sector is swimming in cash. Whereas the NHS just doesn’t understand us. Clearly what we’ve got to do is change thinking because right now, it doesn’t sound like community pharmacy is held in high regard,” he says.

As a taskforce leads the discussions on how best to manage the Pharmacy Voice and NPA separation, the chairman is adamant that new points of view are needed to make the sector’s case in 2017. “Patient associations and groups will be the voice now,” he insists. “Friends and advocates, including Diabetes UK and alcohol awareness bodies” will “make far more noise” and have “far more influence”.

So what caused this move to be a more sophisticated campaigning approach? “[The government now] knows what’s coming from Strachan, they know what we're about” he explains. “You can only play that card for so long.”

And another thing: Mr Strachan’s views on…

“My understanding of it now is that the communication is very patchy. It is quite local; there doesn’t seem to be many structures in place and I’m not convinced it amounts to much in the end.”

“Our members love the job they do, they are good at it. They’re resilient and they’ve got the skills to innovate.”

…the possibility of pharmacy closures

“We’ve had members ringing up concerned about closing. Some are sitting on 20-year leases at £15,000 a year, with no break clause. You can’t just walk away from £40,000 of debt. But every business model is different and all we can do is support them as much as we can”.

…the beacon of hope for pharmacy

“I’ve picked up that David Mowat likes the Scotland model, which makes a lot of sense to me. I like the idea of a shared ownership model – sharing rewards, sharing efficiencies and sharing success.”

…the best way for pharmacies to survive the cuts

“The supply function sustains everything. Over-the-counter products turn a good profit, but services have always been my heritage and businesses need to diversify and maximise their services wherever they can.”

NPA: Pharmacy Voice disbandment was 'inevitable'
03/02/2017 | 0 | News
0 Comments
Question:
Where do you think the NPA should go from here?
Login or register to post comments