Pharmacy owners have had to "beg, borrow and steal" personal protective equipment (PPE) to protect their teams from COVID-19, say contractors

At least six community pharmacy professionals have died so far from COVID-19. Pharmacies have had to stay open to the public during the pandemic to ensure patients get their medicines, so contractors want to protect them as best they can. But for many businesses, the government's response on PPE in pharmacies has been inadequate.

The latest advice on PPE from Public Health England (PHE) for pharmacy staff, which was published in April, is to wear a fluid-resistant surgical mask if working in an area with possible or confirmed cases of COVID-19 where they are unable to maintain two metres of social distancing. If you can stay two metres apart then no PPE is needed, according to the guidance.

But every patient that pharmacy team members see may have COVID-19, and maintaining two metres of distance all the time is impossible. At least some of those working in the pharmacy need PPE but managing to get hold of it has been a problem.

After an initial delivery in March of packs from PHE containing 50 masks, 200 aprons and 100 pairs of gloves, pharmacists have been left to source their own supplies. NHS England says it it thinks it is “unlikely” that pharmacy teams would use the entire pack.

“There are few occasions where it is expected that staff will be required to wear PPE in the pharmacy setting,” NHS England says in the COVID-19 standard operating procedure for community pharmacy.

The government made PPE available for pharmacists to purchase separately from the national stockpile through wholesalers. But at the end of April, the Royal Pharmaceutical Society (RPS) raised concerns about the inability of pharmacists to maintain social distancing or get their hands on PPE.

These fears were realised on April 29, when wholesaler representative the Healthcare Distribution Association warned that mask stocks for pharmacy staff had almost completely run out. The announcement prompted Pharmaceutical Services Negotiating Committee CEO Simon Dukes to say that the situation was “putting the safety of community pharmacy staff at risk, which is quite simply unacceptable”.

Yet the experience of Community Pharmacy West Yorkshire committee member Ashley Cohen shows help is not always forthcoming from the service. With 35 members of staff across his two Pharm-Assist branches in Leeds, he was using at least 70 masks a day in April.

He called the helpline, but they told him to contact his wholesaler, only for him be told it didn’t have any PPE in stock, he says. He repeated this process over and over. “This helpline was doing everything but helping,” he says. “Over two weeks I sent 40 emails and had multiple phone calls – I wouldn’t let it lie.”

Mr Cohen procured a couple of weeks of PPE stock for his staff, which gave them some breathing room. He has been forced to “beg, borrow, and steal” from everywhere he could think of – including putting out calls on social media.

Many local businesses and people across the UK have been making visors to give to pharmacies, highlighting the struggle to acquire them from wholesalers. Pharm-Assist received PPE for every member of staff from Mr Cohen’s children’s school. It has been using more PPE than NHS England recommended throughout the pandemic, he adds.

Despite having PPE, a one-in-one-out policy and screens, some of his colleagues became unwell. “At one point we had six staff off with COVID-19 symptoms. One was severely ill, with her husband in intensive care. My staff have seen people go into intensive care and they are terrified,” he adds.

“Sourcing PPE has been a nightmare”

Amish Patel, superintendent pharmacist at Hodgson Pharmacy (pictured below) in Longfield, Kent says the PPE guidance has not matched the reality of requirements of working in a pharmacy. “It is impossible to stand two metres away from customers in our environment,” he says. After the first delivery of PPE from Public Health England, his business was left to fend for themselves. 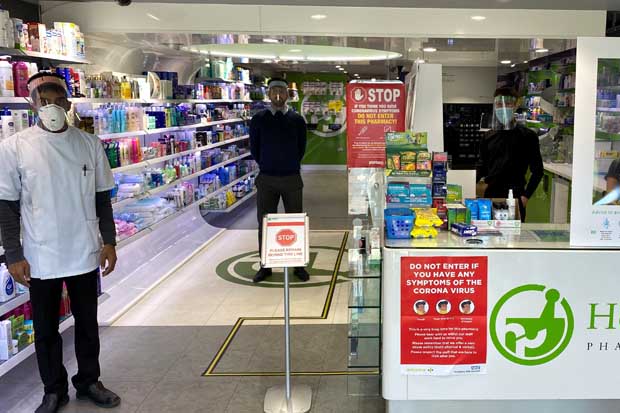 “I can’t get hold of [PPE] at all and prices are extortionate. Sourcing it has been a nightmare. I complained the to MP and council and they arranged for PPE to be delivered – we got 200 masks, a roll of aprons, two boxes of gloves and some goggles,” says Mr Patel.

Like Mr Cohen, he also managed to source some for free from a local school, which he helped send to pharmacies across Kent. The pharmacy has also bought additional uniforms for staff so they can wash them when they get home.

But he points out his staff use the equipment quickly, getting through 25 masks a week. He questions whether the government advice on PPE usage is sufficient. Out of his eight members of staff, at one point three were isolating simultaneously with COVID-19 symptoms.

Local communities have stepped forward to protect pharmacies with more than visors. In April, a Warwickshire local pharmaceutical committee (LPC) funded a pack of 200 masks and a bottle of hand sanitiser for every pharmacy.

In Hereford and Worcestershire, the LPC has donated towards a local college’s production of visors. Manisha Sharma, LPC strategic partnership lead across Coventry, Warwickshire and Herefordshire and Worcester says: “Some pharmacies were really appreciative – when I took them round, they had nothing and couldn’t even get masks. It does show the importance of collaboration.”

Hemant Patel, secretary of North East London LPC, says the PPE situation has added to contractors’ concerns. “Pharmacists are being asked to get PPE from wholesalers, but the costs are pretty high, if not extortionate. And pharmacists are unclear at the moment about how they will be able to claim for costs.”

In Preston, Lancashire, one contractor had no luck with calling the national helpline so stopped trying. “We have a big team of more than 20 so we’re getting through 40 masks a day,” says Michael Ball, owner of Broadway Pharmacy (pictured below). “We have had to self-fund much of it and it is [costing] in the region of 80-85p a mask.” 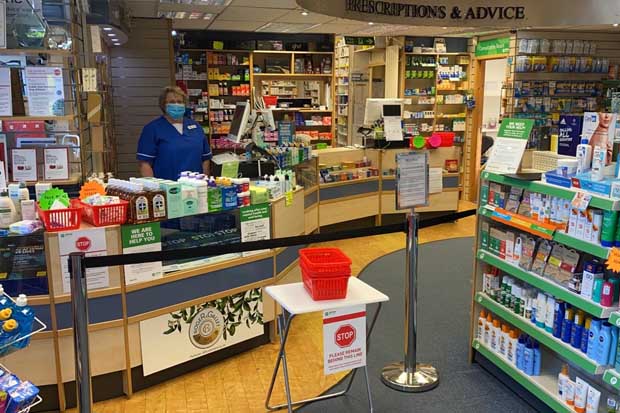 Mr Ball has just about managed to source enough PPE so far but it has taken a lot of time and effort. “I want to look after myself and my staff by purchasing it, but I hope that down the line it is recognised [by the government].”

Despite putting strict protective measures in place in the pharmacy in March, Mr Ball and four other members of the team took time off work after suffering COVID-19 symptoms.

Ade Williams, superintendent pharmacist at Bedminster Pharmacy, Bristol says that for his team (pictured below), where the government has been absent from PPE supply, the local community have stepped in. 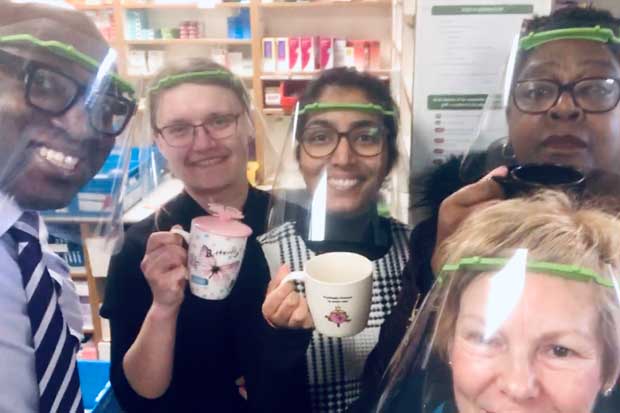 “We also had problems getting hold of PPE after the initial delivery from PHE, so we highlighted our desperation and members of the community came forward. Some made visors, some [ordered] face masks from China,” says Mr Williams.

He says he did not feel comfortable sharing PHE's advice with his team. “When you look at our daily working environment and you look at the guidance it doesn’t inspire confidence,” he explains. “Everybody that you see could potentially be a carrier – that’s obvious.”

Acquiring PPE is “a moral responsibility”, he says. If it hadn’t been for the community stepping up, the team would have struggled. “Outside of donations it would have been something we most likely couldn’t afford.

“In an ideal situation, there would have been essential access to all these things and you wouldn’t be left to do it yourself. I would not open the pharmacy knowing the team weren’t as protected as best as possible.”

The lack of PPE has made an already stressful situation even more difficult to cope with for pharmacies, as the sector reels from the added workload and dangers of COVID-19.

But pharmacy owners have little choice other than buying PPE themselves for their staff to minimise their chance of contracting the disease. Until the risks from catching the virus disappear, the costs of purchasing the equipment will continue to pressure their finances.

Legal view: Pharmacy contractors have a duty to try to acquire PPE
20/04/2020 | 2 | Views
6 Comments
Question:
What PPE does your pharmacy have?

I ordered through the emergency line, a week later I phoned to check why the order had not been sent out I was told that it had already been deliverd to my pharmacy. The person that I was speaking to was insistent that my pharmacy had received the delivery until I asked for proof of delivery, at this point I was told that they would resend. Only half the order arrived on the resend, I asked for the complaints procedure- apparently there isn't a complaints procedure.

Clearly, in my opinion, somebody rather than distributong the stock is syphoning it off to sell as a little earner on the side and there is nobody to address the matter.

PSNC ought to be negotiating a fixed amount of the government advance payment that will not be repaid to account for PPE costs - eg 100% would be a good starting position.

Hard to fathom out that to date the only "new" money we have received is a few hundred pounds to contribute towards persex screens. No mention of the several thousand pounds I have had to pay for PPE equipment for our pharmacy teams, increased overtime, extra support staff, more delivery drivers to cope with 400% increase in volume, increase admin time sourcing medication, increased cost of medication, reduced income from OTC sales, enhanced services....................

unless ofcourse if you work for a multiple, then even a 1000% increase in volume will not trickle down to you.

Given that Pharmacies were expected to be open - and directed to be open on Bank Holidays - while our GP colleagues sheltered behind e-consult - the support provided by PHE & DoH has shown what genuine and utter contempt with which we are viewed. Guidelines saying PPE was not required when was cannot socially are ridiculous. All you need is one member of staff to get symptoms and the pharmacy will close because everyone else becomes a 'contact' - and that doesn't even get you in to the potentially dangerous situation of actually contracting Covid-19 (Let's not forget, 40,000+ people have died as a result of catching this virus)

This has been an ongoing issue throughout the pandemic.  Not only do pharmacies need to consider customers entering the building but also members of staff who may becarrying the virus.  The majority of dispensaries are arranged so that it is impossible for staff members to maintain social distancing.  The article above mentions several pharmacies where staff have shown symptoms and had to self-isolate and they could well have been shedding virus particles before symptoms developed.

Public Health England need to take a good look at pharmacy layouts in general before declaring that PPE is only required occasionally.

Six deaths among pharmacy staff is six too many.  It could have been so many more without the efforts made to source PPE in the local communities.