Mark Bather: I'm not a pharmacist, but that's not my job

It would have come as quite a shock for many in the sector when Rowlands exclusively revealed to C+D in June that its managing director Kenny Black had left the business to pursue new career opportunities. With 20 years of service at the multiple, Mr Black had been an established figure in community pharmacy – even appearing in the Channel 4 series Undercover Boss in 2014.

His replacement – Mark Bather, who joined the multiple at the start of the year as retail operations director and was promoted to Rowlands’ new managing director six months later – arguably had big shoes to fill, getting to grips with a rapidly changing sector, not to mention a few sceptics of his retailing background.

“It made me smile when my appointment was announced and I saw the comments on the bottom of the C+D article,” Mr Bather says.

“Someone said: ‘It’s like expecting a sailor to fly a plane,’ which I thought was quite amusing really.

“I think part of the reason I was asked to join originally, even before I was made MD, is because the board recognised that we needed to make sure we were fit for retail,” Mr Bather says.

“I’m not a pharmacist. I can’t tell you the difference between different simvastatins, but that’s not my job, I don’t need to. What I do have in place around me is a really good team of people who are.”

When Mr Bather took on the managing director mantle, the multiple had just put 70 of its branches up for sale – 12 of which it later took off the market and brought back into the business. Meanwhile, its biggest competitors Boots, Lloydspharmacy and Well had already announced their own variations of digital transformation, and there was the matter of the impending funding contract for England, which would determine whether the sector would continue to suffer “draconian cuts” – in the words of Mr Bather’s predecessor – to pharmacy funding.

However, he tells C+D he is not fazed by the task of heading up the UK’s fourth largest pharmacy chain, and a few things have helped him get to grips with the sector fast: the 12-14 weeks with Rowlands before he was made managing director; a “really good brief” of the sector from Mr Black and Phoenix UK’s group managing director Steve Anderson; and a handy glossary of pharmacy acronyms from superintendent pharmacist Margaret MacRury. 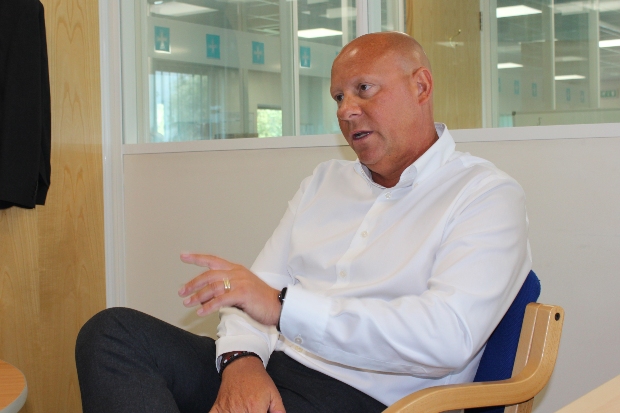 Mr Bather did have one concern when he first joined Rowlands, however: the impact selling the pharmacies would have on their staff.

“I wasn’t here when the original decision [to sell branches] was made, but it was a difficult one,” he tells C+D when we sit down at Rowlands’ head office in Runcorn, Cheshire.

“When I first met Kenny in January, we were chatting about it, and I don’t think he was comfortable with selling anything. Why wouldn’t you want to make everything a success?

“But it feels better now, and I genuinely think it’s the right choice for us,” he explains.

Selling the 58 pharmacies will allow the multiple to concentrate on its “core estate”, which will “be in a better place to attack the future”, Mr Bather adds. While it will be “tough” for some staff, especially those who have been with Rowlands for a long time, “others might be quite relieved of the chance to work for another pharmacy”.

Mr Bather has spent the first six months of his role visiting branches, meeting staff and looking at market competitors, to help map out a plan for Rowlands. His conclusion: “There has been a real energy to move towards digital solutions” across the sector.

However, he is quick to stress that Rowlands will not be following the likes of Boots and Well by revamping its business strategy in the immediate future.

“We’re working hard to get our digital solution right,” he says. “We’re in lots of conversations with people on what we might or might not adopt. In time – and certainly not in a long time – I think we’ll be in a position where a mix between digital and bricks-and-mortar is a much better solution for us.”

Patients want the ability to book appointments in advance, Mr Bather continues. “Quite what that will look like, I’m not sure,” he adds, explaining it could be something Rowlands looks to implement in the future.

What does the pharmacy of the future look like? 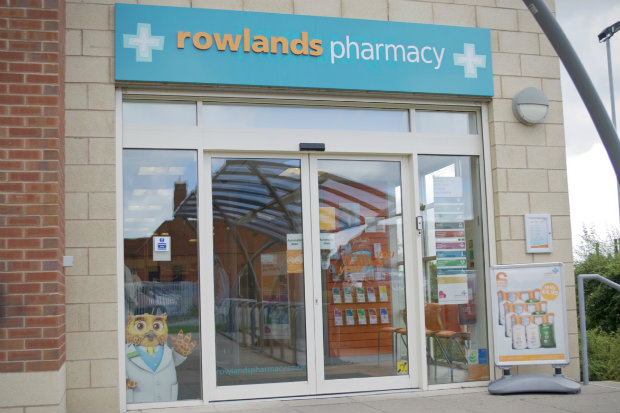 With digital transformation plans in the offing, Mr Bather is keen to put his previous experience as head of stores at mobile company Telefónica and store director at Tesco into practice at Rowlands. Later this year, the multiple will start work on how it can transform its more than 450 pharmacies, he says.

“We’ve got a real opportunity to look at what we want our stores to be in the future.

“If you design a pharmacy in its current shape, with the dispensary the same size and the same amount of space dedicated to over-the-counter products, you won’t be fit to fight in five years’ time.”

With the push towards offering more pharmacy services in the recently announced five-year funding contract for England, “we need more space to do it”, Mr Bather says. However, he admits that the challenge with adding more consultation rooms is “you need more people”.

“Then if there is no booking process, you don't know who to book for when, so you have a lot of people standing around,” he says.

“But if you had a booking process and could get people to fill every slot, and guarantee two consultation rooms, why wouldn’t you do it?” 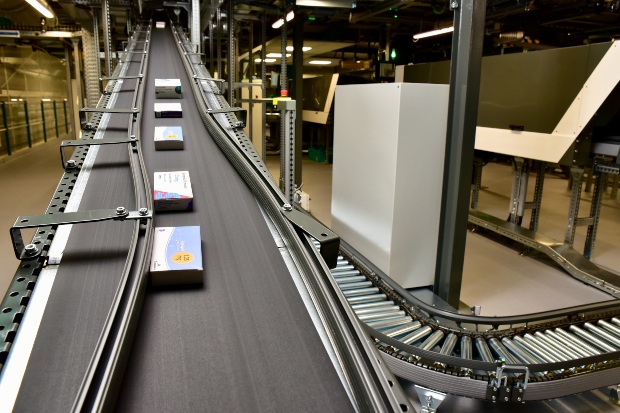 An area that Rowlands has already invested heavily in is automation. Just last week, its parent company Phoenix UK unveiled its new hub-and-spoke dispensing facility, MediPAC – accessed through a tunnel just down the corridor from where our interview takes place.

By the end of the year, the multiple expects the 26,000 square feet of machinery to have the capacity to dispense 16 million prescriptions annually for all Rowlands branches in England, Scotland and Wales – the equivalent of 40% of the branches’ dispensing volume.

It was probably “quite painful” for the first few stores to trial the hub-and-spoke system, Mr Bather says, “but what it does brilliantly is enable us to take volume out of stores…and now [branches] are asking to be added quicker and disappointed if they're not on the next programme”. 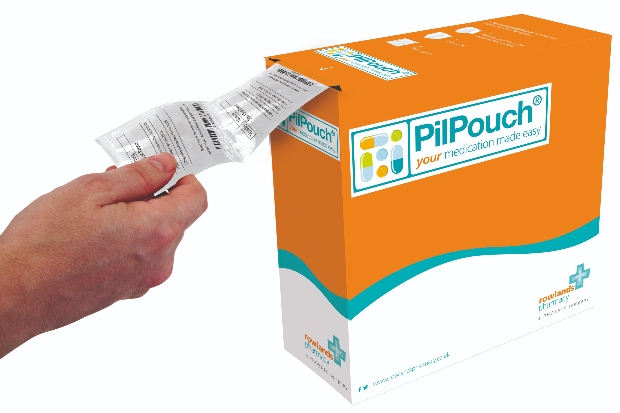 Before hub-and-spoke, Rowlands had already dipped its toes in the automation waters by moving the preparation of medicine trays from branches to a central, automated system, also at its head office in Runcorn.

By the end of this year, Rowlands expects to have just under 100 of its pharmacies using the automated system, which replaces traditional monitored dosage systems (MDS) with a pouch-based dispensing device called PilPouch (pictured above).

Mr Bather says reducing the volume of repeat prescriptions from pharmacies via the hub-and-spoke dispensing model and reducing the time it takes to prepare and dispense blister packs in branches not only frees up pharmacists to provide more services, but reduces the amount and cost of stock held in each pharmacy.

“When I started visiting our branches, I was shocked by the stockholding volumes,” he says. “But when I visit competitors and independents, it's the same pretty much everywhere. [The automated system] allows us to reduce that volume, which is a benefit for the whole team.”

Rowlands made C+D headlines in 2017, when it revealed the automated MDS system would mean having to “re-look” at staffing levels in its pharmacies. One branch manager reportedly resigned after being asked by the multiple to become an accuracy checking technician (ACT).

Mr Bather admits that rolling out the PilPouch system “has been a challenge for us”.

On joining Rowlands, Mr Bather set up a team to oversee big projects like these, led by a newly created head of transformation role, which will help Rowlands to “really land transformation” in future, he says.

He has also introduced a 21-strong regional leader team – made up of external hires from Boots, Lloydspharmacy and outside of the sector, as well as “established people” from within Rowlands – and two new “heads of north and south”, who feed back what’s happening on the ground to Phoenix’s senior leadership team.

“We've rolled out programmes in the past that have felt clunky. But I'm confident now that we've got the rhythm of what we've got to do, it feels comfortable. With 21 regional leaders and heads of north and south, we can really start to make transformation happen in our estate.”

What’s next on the agenda?

With Rowlands’ automated systems seemingly on track to benefit all the multiple’s branches by the end of the year, and five Rowlands pharmacies in Liverpool currently piloting private travel clinics, before a planned rollout at the end of the year, what has Mr Bather got his eye on next?

“I'm not sure our business will be chasing down facial skincare checks like some of our competitors,” he says with a smile.

Rowlands will “certainly get out to look at a couple of competitors and some of their innovations… but I also think it's about being true to what we are”, he stresses.

“We are a great community pharmacy, that's what we want to be.”

Kenny Black leaves Rowlands Pharmacy after '20 years of loyal service'
03/06/2019 | 10 | News
0 Comments
Question:
What do you make of Rowlands' plans for the future?
Login or register to post comments