The secrets behind a C+D Award-winning pre-reg placement

C+D’s pre-registration pharmacist of 2018 describes her international career path – from her childhood pharmacy hero, to her current managerial challenges

Marisa Maciborka won her C+D Award – for Pre-registration Graduate of the Year 2018 – for her work at Bedminster Pharmacy in Bristol. But her path to UK community pharmacy started 3,500 miles away – in the “really tiny town” of Ayr, in Ontario, Canada.

Her lifelong passion for pharmacy began while growing up next door to Ayr’s resident pharmacist, who “had a really big impact in the community”, she explains. “He came to my school when I was in kindergarten, for a careers day. He had his tablet counter, and was counting M&Ms as if they were pills.

“He ended up giving the M&Ms to me, because he knew I was the neighbour’s kid,” she says, laughing at the memory.

This bribery-by-confectionary strategy clearly worked. By the age of 13, Ms Maciborka was taking part in placements at the pharmacy, and by her late teens she had upgraded to regular stints working there.

Her neighbour pushed her to “go the whole way” and study for a pharmacy degree, rather than train as a technician, as she had originally planned.

Put off by the six years it takes to complete a pharmacy degree in Canada – and the limited chances of getting into one of only two pharmacy schools in the province – she looked to the UK, and settled on the University of Aberdeen. With the “support of her family”, she describes this move as “the best decision I ever made”.

When it came to picking a pre-reg placement, her MPharm student flatmate’s repeated praise for the city of Bristol, along with her undimmed interest in independent pharmacy, prompted her to apply to a “select few” pharmacies across the city.

She ultimately opted for Bedminster, enticed by its reputation for being “all about the services”, its 100% pre-reg pass rate, and “all the awards they’ve won” – including a cabinet’s worth of C+D trophies. 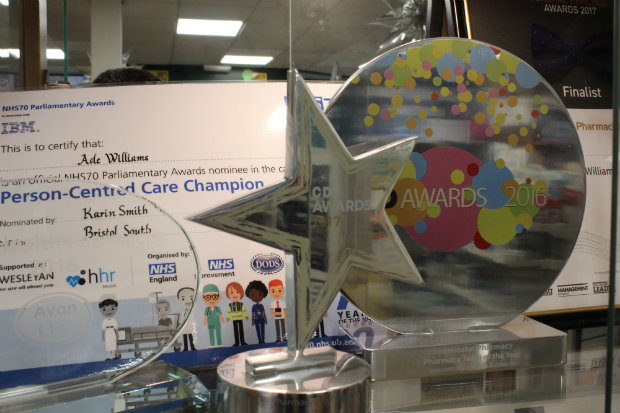 “Good vibes from the beginning”

So how did she find her second move to a new country? Bedminster’s superintendent Ade Williams and his team “made me feel at home right away”, she says. “I phoned my mum to tell her I’d never felt so at ease somewhere before – it was good vibes from the beginning.”

She hit the ground running, taking – in Mr Williams’ words – “many opportunities to impact upon the health of the Bedminster community”.

That doesn’t mean she wasn’t in “a bit of shock” in the early weeks. “The hardest thing was the accent,” she says, referring to the signature Bristolian burr. “I was like: ‘I don’t understand anyone and no one understands me.’” But she describes herself as “very adaptable”, and accepts “a leap is needed” for any pharmacy student entering their pre-reg year. “If you embrace the fact that it will be a transition, then it’s smoother sailing,” she advises. 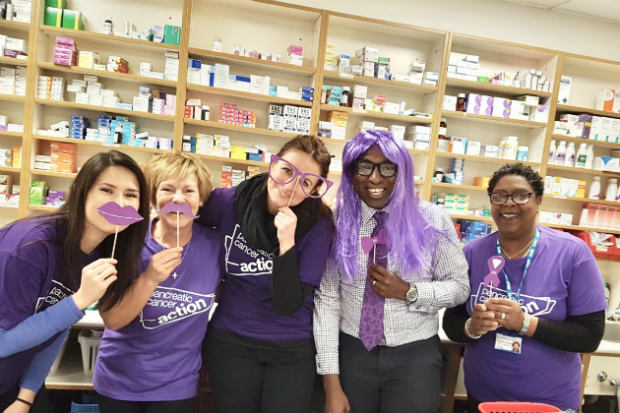 Before she knew it, she had taken the lead on a range of initiatives at the pharmacy, including an in-store pancreatic cancer awareness campaign (pictured above), for which “the team wore purple wigs for a day and got the conversation flowing with patients”, and set up the pharmacy's Facebook page to increase community engagement.

She also led the pharmacy’s winter warm homes outreach programme, as “there are a lot of people in our area who can’t afford heating”, and helped the team get to grips with the electronic prescription service’s monitored dosage system functionality. “Once I understood why I needed to do something, it was easy to figure out the system,” she says.

Her impressive weight management service saw a 15% year-on-year improvement in patient sign-ups and an average weight loss of 7%, and she had the highest patient retention rate of any smoking cessation advisor in the Bedminster team.

Ms Maciborka says an occasion manning the pharmacy's booth at an over-60s event in central Bristol was a memorable turning point in her training. “We were meant to just be giving out information [about local services], but people kept asking us for medicines advice anyway,” she recalls. “I told them I was a trainee, so my knowledge wasn’t the best, but when I started to talk to them I realised: ‘I do know all this.’ It solidified that I had learned a lot that year.”

It wasn’t only her work ethic that was appreciated in the pharmacy. Mr Williams (pictured below) describes how she “infused her Canadian charm into the whole team”. “The gloom of the funding cuts and added pressure of delivering care in a challenging community can be evident on any given day,” he explains. “That’s when her familiar shout of, ‘It’s time for a cookie and tea’, really lifts the team.” 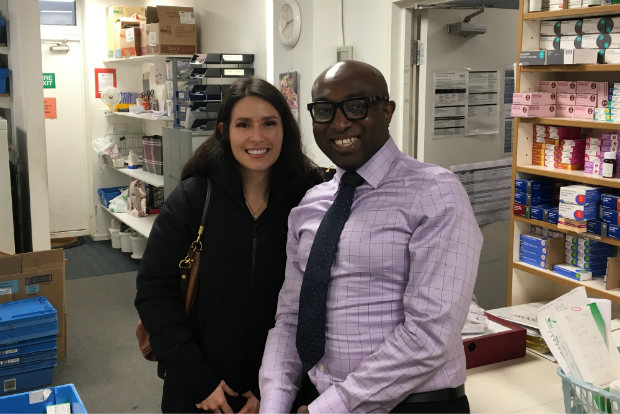 Ms Maciborka agrees she brought something “a little bit different” to the dispensary dynamic. “Maybe it’s the way I was brought up, or just the way I am, but I always try and have a positive outlook.

“If there’s a customer who’s having a bad day, I try and help them realise there’s a solution to everything; especially in a pharmacy, where our job is 99% problem-solving.”

This charm offensive had benefits beyond the pharmacy walls. Mr Williams is quick to point out how popular Ms Maciborka is with local GP practice receptionists, and her regular contact with their prescribing leads helped the pharmacy “deal with our now ever-present stock issues”.

“I guess it’s just being friendly and nurturing a relationship, as you would with a patient,” she tells C+D. “That way they can be more informed and know whether they want to release a prescription to you.”

It’s all about the patients

Her list of achievements culminated in winning the C+D Award for Pre-registration Pharmacist of the Year in July 2018. But as Ms Maciborka looks back on the placement, it's the patient interactions that remain a highlight.

“I miss some of the patients here,” she says, gesturing around Bedminster Pharmacy. “It’s strange not seeing them all the time.”

The close connection Ms Maciborka and the whole Bedminster team have with their community often meant patients went the extra mile to help them, and she fondly remembers one regular who bought them a kettle for their morale-boosting tea and cookie rounds.

“It’s having the ability to have that outreach with people, and [knowing] they rely on you,” she explains. “That was the cornerstone of my pre-reg year and, I guess, my career – that you can have an impact on someone.”

Considering her hard-earned reputation for throwing herself in at the deep end, it’s no surprise to learn Ms Maciborka is now managing a Lloydspharmacy inside a Sainsbury’s store. The branch had been without a permanent manager for a year and a half, so she had her work cut out bringing the processes back up to speed.

“My first shift was a massive shock,” she admits. “The team is great, but if you don’t have a manager there all the time, then it’s going to fall to pieces.”

Her “first order of business” was sorting out the dispensary, including removing expired medicines, alphabetising the stock and updating the computer. “It was crazy,” she says with a smile.

It may have seemed a huge task for a newly-qualified pharmacist, but when she talks to C+D – just seven weeks after she took on the role – the dispensary is now organised and she’s hired two new staff. She’s already moved on to her next challenge: ensuring all of the former Sainsbury’s branch’s practices are in line with current Lloydspharmacy standards.

Looking further ahead, where does this C+D Award-winning pre-reg see her career heading? “I definitely want to own a small independent someday,” she says.

Whether it’s revamping a multiple or owning an independent, it’s clear that Ms Maciborka’s underlying passion will always be guided by the principles she learned from her childhood pharmacist neighbour on the other side of the Atlantic. “As a community pharmacist, you can reach so many different types of people, all ages, all backgrounds,” she says proudly.

“That’s what makes me happy; that’s what drives me.” 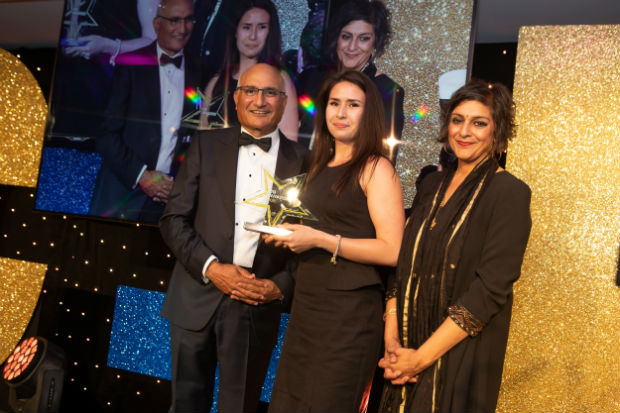 “It really helped with the [registration] exam,” she says. “It’s knowing that you have a tutor and a team behind you that want you to pass; but at the end of the day, it’s your exam and [only] you know how much you know.”

During your placement, make sure to “push yourself to learn the systems” in the pharmacy, she adds. “If you don’t know a drug, open the leaflet and take a look – it’s your job to stay on top of things.”

“Don’t be afraid to admit you don’t know something, or ask again if you didn’t understand it the first time.

“Sometimes people are scared to ask, because they think as a pre-reg they should already know everything. But the whole pre-reg experience is about getting as much knowledge under your belt as you can. Then you’re out in the world, fending for yourself.”

“You know what you’re doing, but if you don’t have the self-confidence to back that up, then you’re not going anywhere anytime soon.”

Could your pre-reg win the C+D Award in 2019? Entries for all 14 categories – including the new Locum of the Year Award – are now open, so find out more and enter below.

‘Why I tackled loneliness after winning the Above and Beyond Award’
20/12/2018 | 2 | Features
0 Comments
Question:
Could your pre-reg win at the C+D Awards this year?
Login or register to post comments