Sixty-eight per cent of readers struggle with EPS at least once a week, according to a C+D poll

Systems supplier Positive Solutions was "surprised" by the results, which show the majority of readers experience problems at least once a week

Nearly four in 10 readers face problems with the electronic prescription service (EPS) on a daily basis, a C+D poll has revealed.

Thirty-eight per cent of 255 respondents to the poll, which ran on the C+D website from June 10 to 17, said they experienced issues with EPS at least once a day.

A further 30 per cent of readers said they struggled with the service at least once a week, and 17 per cent said they encountered a problem between one and three times a month, the poll revealed. 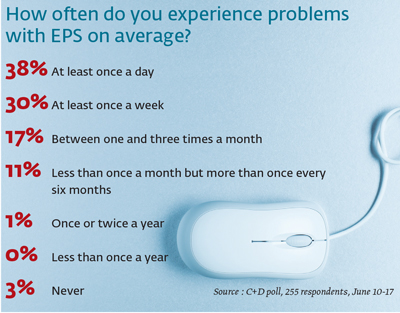 “Most of our EPS issues are around smart cards expiring and people forgetting their passwords,” Mr Jones. “We don’t have a lot of issues otherwise.”

But contractor Kieran Eason of Eason’s Pharmacy in Tamworth told C+D that readers’ reports of daily EPS issues sounded “quite normal”. A “large chunk” of the issues related to “messages not coming back correctly” from central NHS IT system the spine, he stressed.

“We have problems most days. Every time something goes wrong, we can’t fix it ourselves – we have to ring the PMR provider,” he said.

Mr Eason said that one error a week would be “more manageable”, although this was “still quite a lot”. “One error a month and we would be happy,” he added.

Pharmacy Voice reported earlier this month that there had been “two unplanned [EPS] outages of a couple of hours each” in May, which was “well below the desirable level of reliability”.

Pharmacy Voice national IT lead John Palmer said C+D’s findings reflected poorly on EPS, but it was difficult to provide further analysis of the problems without knowing their “duration, severity and causes”.

“EPS relies on a number of organisations and each section of the pipeline needs to work for prescriptions to flow,” he told C+D. “Organisations do take any problems seriously and over time – with appropriate resources – reliability will be driven up.”

Pharmacy Voice was working with other organisations to “define service levels and ensure appropriate agreements were in place”, Mr Palmer added.

What EPS problems do you most commonly experience?

Posted on Tue, 23/06/2015 - 15:16
From PSNC News; "The Health and Social Care Information Centre (HSCIC) has made live service status information available to community pharmacy contractors through their Smartcard. The Service Status pages show the availability of national infrastructure services, such as EPS, Spine, N3 and the Care Identity Service, which manages Smartcard access. This means that a pharmacy team experiencing problems accessing or processing an electronic prescription can see at a glance if there is a national service issue and, if it is not, users can be confident that they should contact their supplier’s helpdesk for support." This should prove interesting!

Posted on Mon, 22/06/2015 - 17:01
First off just to confirm I don't use Analyst (I use a system to "manage my pharmacy"). One of the things I find most annoying as an independent is that when my contract expires I don't know who to change too. It would be nice if there was some sort of independent review of every PMR. The only information I have at present is that anyone must be better than what I have!

Posted on Mon, 22/06/2015 - 14:01
I have to agree with all of the other Analyst users in reporting no problems - though talking with my colleagues using other PMR systems makes me shudder. It does make you wonder, doesn't it, about the robustness of the system certification by HSCIC? Substandard system providers risk jeopardising the entire EPS system which surely is in nobody's best interests. My sympathies go out to all using substandard EPS systems, particularly as the vast majority of us are not free to choose or even influence which PMR system we use.

Posted on Mon, 22/06/2015 - 08:59
It will be interesting to see if this is ever fully implemented. it creates so many potential issues for your local high street Pharmacy not least the competition from Internet Pharmacies. Hearing regular issues now of scripts being diverted away from the high street by GPs!

Posted on Sat, 20/06/2015 - 23:36
Martin Jones puzzlement is easily explained. He is either being a little bit disingenuous or simply does not comprehend just quite how far ahead of the competition Analyst is. The fact that Analyst users do not experience the problems experienced by users of other PMR systems means that there is no fundamental problem with EPS. The majority of problems experienced are due to the implementation of EPS by other pharmacy system suppliers.

Posted on Sat, 20/06/2015 - 10:15
.........."surprised" by the results, which show the majority of readers experience problems at least once a week''.Try almost on a daily basis!! What a complete waste of NHS resources. We've been saying that well before the whole net went up but no one ever listened.

Posted on Fri, 19/06/2015 - 21:42
Patients expect eps prescriptions to get sent instantly. This doesn't happen-they can take 10 minutes, they can take 2 hours. Sometimes it's physically quicker to walk to the pharmacy with a paper prescription.

Posted on Fri, 19/06/2015 - 20:44
The way Annabelle has structured this piece could, inadvertently, give the impression that Kieran Eason is using Analyst PMR and contradicting me. So, for the avoidance of doubt, Kieran does not use Analyst PMR and I can’t comment on his experience of EPS. Interestingly though, Simon Medley does use Analyst PMR and his comments very much tie in with mine.

Posted on Fri, 19/06/2015 - 20:00
We have daily problems with Proscript.....it's getting to be a bit of a joke really. Rxs not downloaded but tracker says they are with us already, slow performance and constant errors. No amount of calls to helpdesk seems to do any good. Then we have the trainee GPs who have not been issued with Smartcards, so patients and ourselves expecting electronic Rx and its sitting at surgery as a paper FP10. Other than that it's great.

Posted on Fri, 19/06/2015 - 17:58
Surely to make this survey of any relevance we need to know how this breaks down for each PMR system. We use Analyst and don't really have any trouble with EPS other than 3rd party problems (e.g. defective GP staff printing Rxs instead of sending via EPS or messing up 7-day Rxs).