60% of technicians in favour of supervising medicines supply

In November, C+D gathered industry figures for a heated discussion on pharmacy supervision

Sixty per cent of pharmacy technicians are in favour of supervising the sale and supply of medicines, a C+D survey has revealed.

Of 58 pharmacy technician respondents to a C+D survey – which ran from November 22-28 – 35 said they would be in favour of overseeing the sale and supply of pharmacy (P) and prescription-only medicines (POMs) “in principle”.

Many of the pharmacy technician respondents to C+D's survey called for appropriate training and guidelines before taking on the additional responsibility (see below for more comments).

In contrast, just 15% of 243 pharmacist respondents said they would be in favour of allowing pharmacy technicians to have this added responsibility.

In September 2017, C+D exclusively published detailed proposals to allow a “registered pharmacy professional” – such as a pharmacy technician – to supervise the sale and supply of P medicines and POMs. These proposals had been submitted to a Department of Health (DH) programme board tasked with rebalancing medicines legislation.

The working group behind the proposals stressed that “consideration should be given to developing a national UK competency framework/training programme to upskill pharmacy technicians to take on these functions”, according to the confidential documents seen by C+D. 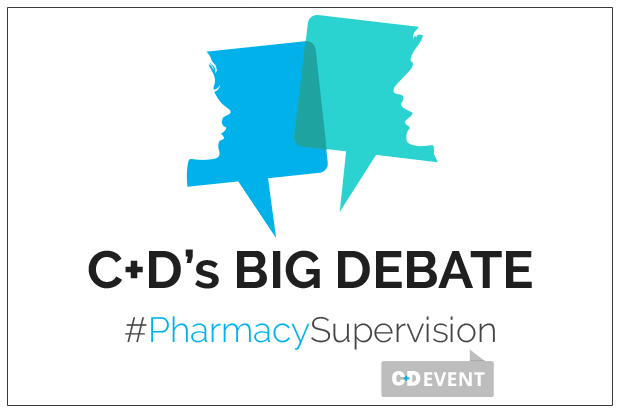 To understand where the sector stands on allowing pharmacy technicians to supervise pharmacies, C+D hosted a roundtable debate in November, bringing together leading industry figures to discuss the proposals. C+D invited readers to contribute to the debate by answering a short survey on pharmacy supervision in the lead-up to the event.

You can read C+D's highlights of the discussion here.

A pharmacy technician in favour of taking on this supervision role argued that “the training technicians have done qualifies them to do this”. By allowing pharmacy technicians to take on more responsibility, “technicians could then take a lot of pressure off pharmacists, freeing them up for other services”, another commented.

However, some pharmacy technicians expressed concern that they are not qualified to supervise medicines supply. One claimed they “do not feel adequately trained”, while another said: “The amount of clinical knowledge required to make these decisions hasn’t been covered in our training.”

One pharmacy technician called for “relevant training and strict guidelines” to be produced before any changes to legislation on supervision, and another said “as long as there are clear protocols... and pharmacy technicians are clear about referral, then I am for this in principle”.

Others complained that the profession is not paid enough for the responsibility. “We're already underpaid for the job we currently do, and [I’m] not sure the extra responsibility would be adequately remunerated,” one pharmacy technician commented. 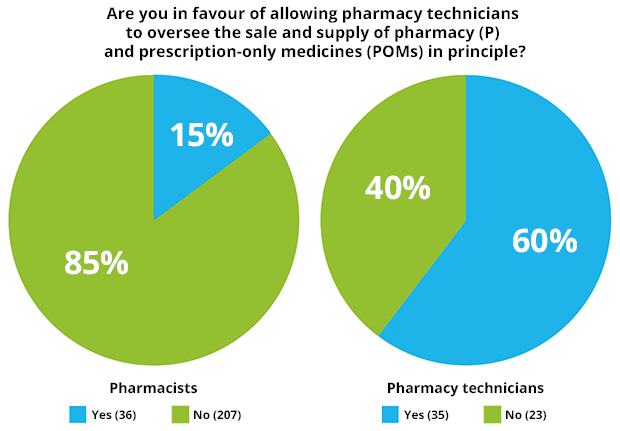 The C+D survey revealed that 85% of the 243 pharmacist respondents are not in favour of pharmacy technicians supervising supply, with several readers concerned that technicians do not have the clinical knowledge needed when supplying medicines. This could “compromise patient safety”, one pharmacist claimed.

According to another pharmacist: “Medicines are becoming ever more complex, with more interactions. Pharmacy technicians don’t have the training necessary to deal with the judgements needed.” One said: “I have no problem in delegating supervision for technical roles as they are technicians, but have concerns about the delegation of clinical decision-making.”

However, a pharmacist in support said it would be “perfectly acceptable” to allow pharmacy technicians to oversee medicines supply if they had “suitable training”, as it would allow pharmacists to “focus on clinical work”.

During C+D’s debate on supervision in November, Association of Pharmacy Technicians UK president Tess Fenn said many pharmacy technicians feel “held back” in community pharmacy and are “ready to take on this additional responsibility” of supervising medicines supply.

Read what else Ms Fenn said, and C+D's other highlights from the debate, here. Alternatively, you can listen to the whole discussion in C+D's podcast below:

Where does the sector stand on technicians supervising pharmacies?
16/01/2018 | 7 | Features
News

PDA defends campaign plans after ‘legitimate anxieties’ on supervision
12/10/2017 | 3 | News
19 Comments
Question:
Are you in favour of allowing pharmacy technicians to supervise medicines supply in principle?

Health care assistants in GP surgeries do flu, B12, spirometry, wound dressings, bp measurement, smoking cessation counselling and I have confidence in them. I can see an extended role for advanced roles for technicians in pharmacy provided they get training and competencies. It could really help the pharmacist in community setting.

Would the answer be the same if they have to take the same legal level of responsibility as that of a Pharmacist and receive their current rate of pay. This could be a manipulation of community pharmacy to prepare for a huge cost-saving exercise. If costs of operating a pharmacy are reduced the reduction of NHS payments can be easily justified. Employee Pharmacists and Pharmacist independent contractors will struggle. Large groups and global corporates will be very, very happy. In fact if it happens in England first it will help them push the same agenda all over the world.

Would the answer be the same if technicians had to take full legal responsibility? I have worked with very good technicians others not as good but it isn't a question of ehther they are good enough or trained enough- the legal responsibility still rests with the pharmacist. ANYONE however good or well trained can make a genuine mistake and I am not prepared to go to court for someone else's mistake

Well of course they would!! It's going to be hilarious when everybody sees the f%ck ups they make! The standard of technicians is too variable - some are absolutely shocking!! Can't wait to see this one blow! The pharmacy ship has well and truly sunk... Those remaining are just the ship's rats that will now have to eat one another to survive - enjoy!!

I agree with you to some extent. But i think your way of putting your point across is not necessary. There are good and bad in every profession. I work with some of the most amazing techs and pharmacists but equally i work with some pharmacists that should be nowhere near medicines or patients. If Techs are allowed to eventually supervise then i feel this would not end well. Lets leave the rude comments out of this.

Total agree Brian, there is no need to be rude about techs to try and validate your point! I also have worked with good and bad techs as well as good and bad pharmacists, this will be the same in all fields of employment. I am however against tech supervision, I feel this should remain with pharmacists as techs clinical knowledge is very limited.

I see the hand of the unregulated Pharmacy owners in all of this. So in their scheme of things, replace the Pharmacist with a Lowly paid Technician to deliver the work they need with less expenditure and more profit.

Pharmacy is a  profession that needed years of serious study, and the majority of Pharmacists were top of their classes. Conditions for admission are tough to attain because of the need to produce the best professional on every occasion.

The reality of this development is to circumvent the role of the Pharmacist by replacing them with poorly educated personnel. This is the practical reality. Pharmacists are already being bypassed, and they can not do anything about it. Someone said that Fatalities due to dispensing errors or Pharmacy incidents are extremely rare during the Boots Story on TV.  That was incorrect. The known and recorded fatalities are rare, but the unknown and unrecorded (swept under the carpet) are a lot. We just have a system poorly equipped to police the Profession.

Now they want to add to that burden by using poorly equipped staff to take over our roles. I have never heard of Surgeons promoting Theater porters to be surgeons overnight. They are sensible, they know which roles in their profession which are sacrosanct

If C and D licensed drugs on the basis of these sample numbers, big Pharma would laugh all the way to the bank!

You’re better than this misleading clickbait.

I am not going to argue the case for and against technician supervising supply but 58 is nowhere near a representitive population size. BTW well done on playing the number game, 60%, sounds so convincing!

Technicians are a key part of the phrmacy workforce and I've met some very competent ones who I have a lot of trust in. However, these proposals are still flawed because:

1) Current legislation still places responsibility primarily on the RP, so the pharmacist would still need to shoulder the blame should an error be caused by a technician.

2) Not all technicians are equally competent (you could argue the same for pharmacists too, even doctors) and the standard of training among employers is likely not up to scratch to produce technicians that are capable of doing the proposed tasks correctly and competently.

3) Large multiples own the majority of pharmacies, and the decision will be taken out of the hands of pharmacists and technicians. Pharmacists will be required to work with technicians under this proposed set up, even if the pharmacist is uncomfortable or has reason to think it's unsafe. Technicians who also feel this way won't have a choice either. The survey is only an indication, but it suggests up to 40% of technicians wouldn't feel comfortable with doing the new tasks.

I totally agree with your comment about legalisation, a pharmacist should never have to worry about legal ramifications when they are not supervising. That is put simply unfair.

I also agree that not all technicians are at the same level, So standardised competency assessment would need to be a given.

I think there needs to be clear lines of referral when I product sale is outside a technicians competency, and training to identify when these are would be a must.

And empowering technicians to be confident against their employees? That's one I don't have an answer for.

It's rough in its current state. We need a firm proposal to see if it is fit for purpose.

And who would take legal responsibility for any errors?? Oh, sorry that would still be me.....

My other comment would be, if the 'protocols' suggested they didn't have the knowledge to answer the clinical queries - who do they refer the patient to to have their question/concern answered?

Making an assumption here, but a supply could be simply refused until a Pharmacist was available back on site, just like it is currently for example.

I must say, I had a chuckle at the 'more training' comment in the article.....do they not just mean complete the pharmacy degree! As that's the training they'd need to take responsibility for answering clinical queries?

There goes the C&D again ... how about doing a survey to find out what is the percentage of pharmacists who would like to be trained to perform brain surgery? Do you see my point?