Danielle Hunt: We are bracing ourselves for an increase in demand for our services

The charity Pharmacist Support is “bracing itself” for an increase in its workload, as 61% of pharmacists responding to its survey call for help with stress at work.

An “alarming” 97% of the nearly 500 respondents to a Pharmacist Support survey felt they needed some form of assistance from the charity, with 59% struggling with their work-life balance, the charity revealed at a joint parliamentary event with C+D yesterday (September 9).

A total of 47% of pharmacists responding to the survey – which was conducted over three weeks in May – said they needed support with managing their wellbeing.

The charity was “particularly alarmed” to note that 71% of respondents identified mental health as a major issue facing the profession, it said.

This figure rose to 78% when looking at community pharmacists specifically, who “consistently stood out in the research as having the biggest concerns about their general wellbeing”, Pharmacist Support added.

A total of 68% of community pharmacists identified isolation as a key problem in the sector, and they were also much more likely to express concern about long working hours (76%) and lack of support from colleagues (70%), the charity said.

When it came to identifying the key challenges facing the whole profession, “there are concerns about widespread funding cuts that are leading to issues around staffing levels”, said Pharmacist Support, with 85% and 83% of respondents flagging these factors respectively.

The charity's nearly 500 survey responses came from a representative sample of all areas of pharmacy, as well as students, pre-registration trainees and retired pharmacists, it said. It also conducted a series of one-hour interviews to help support the development of the charity’s new five-year strategy.

Pharmacist Support has seen a “dramatic increase in demand for its services” over the past 10 years, and has experienced a shift in the demographics of its service users, from the elderly and retired towards working pharmacists, particularly in the early stages of their career, it added.

Revealing the results of the research at the parliamentary event yesterday – attended by MPs and more than 50 pharmacy representatives – Pharmacist Support chief executive Danielle Hunt said it has “highlighted some major concerns around stress and wellbeing”. 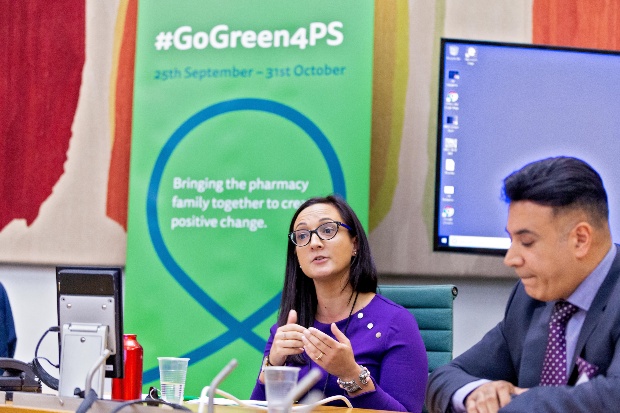 “We are bracing ourselves for a future increase in demand and continue to look for new ways to fund our activity, because currently our demand exceeds our income,” she told delegates.

“Our event in parliament is our first step in proactively contributing to the crucial conversations taking place.”

She urged pharmacists to pledge their support for the charity’s #GoGreen4PS campaign, which runs from September 25-October 31, and aims to highlight the issues and key challenges impacting pharmacists.

Revealed: The rising levels of stress among community pharmacists
30/01/2019 | 22 | News
5 Comments
Question:
Is workplace stress affecting your team and your patients?

I retired last December. Not regretted it one bit.
Read the last paragraph of Treasure Island.

Totally agree with the comments above. I'm not a pharmacist, but certainly experience the associated stress, that goes with the title 'Trainee Pharmacy advisor' due to insufficient staffing levels, a dispenser/branch manager, that is carrying out 'Area management' duties, and implementing new software across that area. How is this fair? Am I just expected to plug the staffing gap, every time, something new, needs to be implemented? Individual risk assessments are required.................

It was an honour to be invited to this parliamentary briefing. Hearing some powerful and authentic testimonies echoed the reality of community pharmacy practice. As a grassroots pharmacist, some stress is good (eustress). However, it is about finding small, simple ways to manage the distress that inevitably will happen at point during the working day/week. Honest communication with patients [about prescription waiting times; medication shortages and medication errors] is paramount. As is finding ways to get on with your pharmacy teams despite the pressures we're all under e.g. relentless EPS workloads; MUR targets; short staffing etc etc.

YES!!!!!! Of course it is. The pressures of Pharmacy life are getting intolerable. I still have thirteen years of this god awful job to go before I can retire and I honestly don't see how I'm going to make it. I'm permanently angry, ratty with the staff and the family, I don't like what I'm turning into, but the pressure of the job and the total lack of support from Management is making it inevitable. The one thing I would do is to urge anyone who is young enough - get out NOW while you still can and you still have your health and sanity intact. It's too late for me but save yourselves!!

Got out myself 3 years ago and haven't looked back since. Reading some of your accounts on this thread makes me think back to my time but I suspect its probably worse now... Good luck.