The average salary of a non-manager community pharmacist has reached £36,768, according to the C+D Salary Survey.

The figure marked a faster rise than 2018’s Salary Survey, which saw an increase of £374 since the previous year. 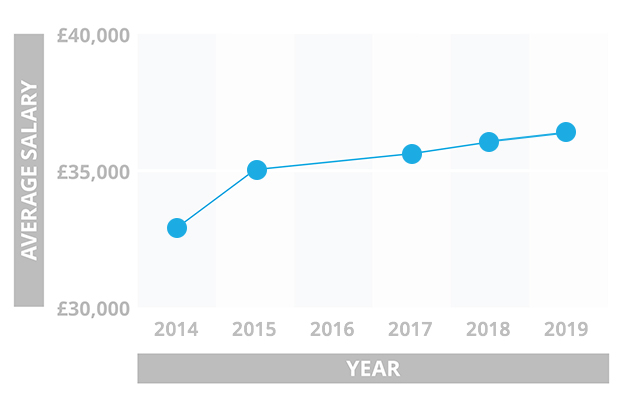 Some 46% of second or non-manager pharmacists who completed the survey said they are dissatisfied with their pay, two percentage points more than the previous year.

One pharmacist said: “I am earning the same hourly rate as I did as a newly qualified pharmacist, 26 years ago. In effect, this is a massive reduction in real terms of pay and yet we have to do over twice as much work.

“No one in pharmacy is paid anywhere near enough for what they do,” they continued.

Another said: “I have to do a lot of services and after nearly 10 years of sincere hard work, my hourly rate is about £19.95.”

One respondent said: “The only time you get a pay rise is if you move role or store or threaten to leave to work for a competitor. Pharmacy will look less and less appealing to graduates if this is not rectified.”

Another said: “No amount of extra pay can justify me working in such a stressful environment. The amount of work is unbearable.”

Over half of respondents (57%) said their pay increased over the previous 12 months, with half of these saying it increased by just 1%.

Only 5% of all second or non-manager pharmacists said their pay had decreased, while 38% said their salary had remained the same.

Half of non-manager pharmacists said they received a bonus in the past year.

Another said their salary was “minimal” for the “amount of work we do and stress we get”.

Why have locum stress levels worsened despite a pay increase?
05/12/2019 | 2 | Features
8 Comments
Question:
Has your salary increased during 2019?

Although I technically don't have a fixed salary as a locum, I've had the equivalent of a £1300 pay rise this year. Changes at one my regular pharmacies means I was able to negotiate a rise in my rate.

Editor, please  forward this article to all schools of Pharmacy.

The problem is £30k for a graduate job seems appealing to some youngsters, the problem is they fail to realise that there is little to no progression and little chance to earn more in CP. So while graduate engineers/architects/solicitors earn less initially their lifetime earning potential is much much higher.

It is also worth noting the fact that non management Community Pharmacy offers almost no opportunity for career (or salary) progression with so many fated to end their careers more or less where they started. Indeed, as others have stated, financially (in real terms) many at the end will now be worse off than when they started.

Hard to think of any other profession where experience and additional qualifications count for so little.

Regretfully, CP today has almost nothing to offer to the young bright and ambitious individual.

Those salaries/rates are simply shocking. Stagnant for the past 26 years! And the salaries in 26 years time will be little different. As the minimum wage creeps up yearly, how long will it be before kids with top A levels who do a five year professional degree and bust a gut in the dispensary are working for practically the minimum wage?

The job has all but died, financially and practically. It's a job where one partner in the household earns a bit on the side for some luxuries, but for those seeking to buy a house and raise a family, pharmacy makes as much sense as a chocolate teapot.

This is what happens when the number of schools of pharmacy are literally doubled overnight. Laughable salaries and hundreds of below par pharmacy graduates who can't pass the pre-reg exam. And then the GPhC scratch their chin and wonder why so many fail, when it is they who green lighted the bum degree courses in the first place.

Seriously though, anybody who is putting their physical and mental health at risk by working such a stressful, high risk, policed to death 'job' needs to have a proper word with themselves.

I once was bored and calculated my wage on the premise the multiples use - services are "100% profit" , but worked it backwards, after removing the pure profit I generated, I was costing the company about £10/hr, and that was before taking casual overtime is taken into account. So I reckon most pharmacists are absolute bargains in terms of value for money, and that's before you even consider that if you don't have any, you can't open the pharmacy.