A Leicestershire contractor has told his local Labour MP, Keith Vaz, that he is having to invest his own money into his pharmacy to stay afloat.

Altaf Vaiya, owner of Alpharm Chemist, said he is having to use his "personal money to support [the] business through this tough time", after government payments dropped by “nearly 20%”.

Last week, C+D exclusively revealed that the Pharmaceutical Services Negotiating Committee (PSNC) is investigating "concerns" from contractors experiencing a drop in payments since December 2016 "closer to 20%", rather than the 12% the negotiator predicted last year.

“A lot of pharmacies are questioning how the cutbacks have taken more money out of their pockets than they were expecting,” Mr Vaiya told C+D this morning (June 7).

Mr Vaiya – who ran unsuccessfully for the English board of the Royal Pharmaceutical Society this year – said his business’s chances of “survival” are “decreasing” because the “cash flow is getting drained”, putting him in a “very difficult situation” with “constant strain”.

Mr Vaiya has been exchanging messages, which you can view below, with shadow health secretary Jonathan Ashworth – MP for Leicester South – “since the general election was announced”, he said.

He was able to put his concerns to Labour MP for Leicester East Keith Vaz in person, when Mr Vaz visited his pharmacy yesterday.

Mr Vaiya explained he is continuing the work of Leicester local pharmaceutical committee (LPC), which has already spoken about community pharmacy with all three MPs in the city, as the government “needs to understand the value of pharmacy”.

“As pharmacists, if we don't make our voice heard, then who's going to support it?” he added.

The Labour party has pledged in its manifesto to “halt pharmacy closures” if it is successful in tomorrow’s general election.

During the visit, Mr Vaz made a plea to pharmacists to vote for Labour, “to help give pharmacists a better deal”. 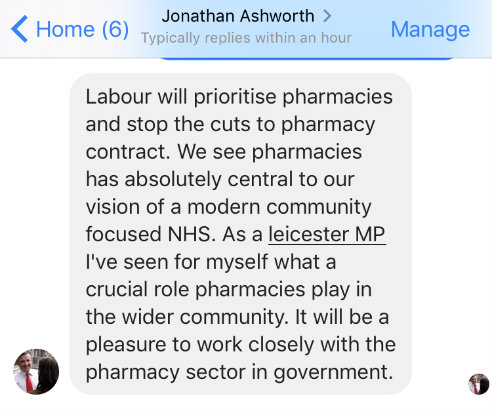 Analysis: Did the Tories break election pledges to pharmacy?
12/05/2017 | 5 | News
14 Comments
Question:
Have your payments from the government dropped more than expected?

Mr Vaiya must decide if his business is viable, is asking the taxpayer to bail him out the answer?

Let's for a second remove politics from the equation - I think my views on the reductions to the community pharmacy contract are pretty well known but that aside....

General practices, similar to community pharmacies, are private organisations with an NHS contract.  They have their rent paid for by the NHS.  They can also apply for support from their local health board (http://www.pulsetoday.co.uk/home/finance-and-practice-life-news/surge-in-at-risk-gp-practices-seeking-health-board-support/20034565.article).  Should these private businesses

My question to you is should these private organisations be "bailed out by the tax payer"?

As a contractor I am not asking for a government bailout, I am as are many contractors like myself asking for more transperancy in regards to the actual decrease in funding so we can be better prepared planning our cashflow.

I want the government to be transparent on funding cuts they state they are making and the actual cost when they implement it on our payment sechdules.

I don't think Keith Vaz is someone you should even have on this forum spouting any platitudes. He's a proven liar. His only concern will be to remain in his seat and continue earning the very healty pay and perks that MPs reecieve.

And is the contractor expecting a government bailout? Does he not think he should use his own money to prop up his own business? If he wanted to play with other peoples money he should have gone into banking or football management. Absolutely beggars belief.

Hi, Kieth Vaz is our elected local memebr of Parliment, I spoke to him in regards to how he can support community pharmacy as we have been encourged to do so by the PSNC and NPA. Whatever the views of Keith Vaz his a member of parliment that represents my constituency, so it is just for me to speak to him regardless of his political track record.

As a contractor I am not asking for a government bailout, I can see you have read the previous article on 'Pharmacies struggle to pay suppliers after 20% funding drop' what contractors like myself are asking is for more transperancy in regards to the actual decrease in funding so we can be better prepared planning our cashflow.

I am not asking in the article to play with anyones money, but as a contractor I have a business to think about and I want the government to be transparent on funding cuts they state they are making and the actual cost when they implement it on our payment sechdules.

Its hard to take on board anything that Keith Vaz says, his integrity, honesty and loyalty to being a dishonest MP makes any pledges and promises redundant.

I wouldn't trust any politician.

Kieth Vaz is our elected local memebr of Parliment, I spoke to him in regards to how he can support community pharmacy as we have been encourged to do so by the PSNC and NPA. Whatever the views of Keith Vaz his a member of parliment that represents my constituency, so it is just for me to speak to him regardless of his political track record. Pharmacy needs the support of our politicians to help for long term planning of funding in our sector.

I maybe wrong, and this point may not apply to you. But if you are located in the, or close to the belgrave area there are literally 6-7 pharmacies in a 1 mile radius. This is not an efficient use of public spending. The cuts in that area will make sense as it would or should lead to a more efficient service.

As for using Keith Vaz to publically back you, shows how low we have to go to make the contractors voice heard. In the past contractors cut pharmacist wages to compensate their own books for profit, now you are unable to reduce the pay anymore. The contractor comes out fighting?! The contractor has been silent until now, until the profits come out of their pockets!!

Last paragraph is spot on. In fact contractors been cutting pay for 10+ years when profits were increasing. They never seem to explain this part of the equation. Hmmm....

Our pharmacy is in that area, there has been a large number of pharmacies in that area for many years, like my previous point we have accepted that we are facing funding cuts which were projected at 12% we have now found that we have had a much larger funding cut which businesses such ours are questioning.

I have been pushing all parliment members but obviously I have to use the parliment member who serves my constituency who is Keith Vaz, we have to look beyond our personal views on politicans and work with them as member of parliment who can raise our voice.

If you look into my history of work, I have worked hard to represent pharmacy as profession in a number of roles that I have served in. I have especially worked hard for pre-registration pharmacies, newly qualified pharmacists, locum pharmacists and pharmacy businesses. I think pharmacy contractors have faced constant cut backs over the last few years, the number of locum pharmacists and managers have increased. If you look as a hold many independent pharmacies have paid constant hourly locum rates through the years however many multiples on the other hand have slashed their locum rates, espeially by employing relief pharmacists. Pharmacy businesses need to operate on profit to be viable and to be able to serve the local community by offering services that show value to the public spending. I would also like to state that pharmacy businesses pay coperation tax's, create employment that helps bring more money into the public sector.

I'am not here to question your credentials or credibility, I'am sure your a fine example to the profession and have been an asset to the community for many a year.

I was initially pointing out to side with someone with the dishonest reputation of Keith Vaz would not help your cause. He has a history of gaining support during election time, he fuels the fire then burns it out when he is in the position he needs to be.

"If you look as a hold many independent pharmacies have paid constant hourly locum rates through the years however many multiples on the other hand have slashed their locum rates, especially by employing relief pharmacists." I disagree 100% with this quote, independents in Leicester do not pay the same as independents in Nottingham, but the multiples do!! The pay cut have been more severe in the independents. I have been offered jobs in Belgrave area at times £10 less an hr than in Nottingham so, as a locum I feel I have a more clearer view of the pay, and sad as it sounds independents slash wages more than the multiples.

Clearly you would not agree with my comments, as they go against your initial mandate but my opinion would be secretly voiced by many locums and residents in the area. I would be more than happy to sit down and debate this with your further.

I would happy to discuss, let me know when your free, dialogue is key :-)