CPS: It is clear minor ailments service is extremely popular

Two thirds of patients with minor ailments would rather consult a pharmacist than a GP, according to a report commissioned by Community Pharmacy Scotland (CPS).

Of the 1,121 Scottish patients who accessed the national pharmacy minor ailments service and responded to a survey – which ran from June-July 2018 – 66% disagreed with the statement: “Given the choice, I prefer to consult a GP rather than a pharmacist for minor ailments.”

The research – conducted in conjunction with Robert Gordon University and the University of Strathclyde – also showed that 96% of respondents were “confident” that treatment in a community pharmacy is as safe as in a GP surgery, CPS added.

Nearly nine in 10 (89%) said they would like to see their pharmacist and GP working together to make sure they receive the best treatment, while 90% said they were “more interested in the quality of care I receive than who delivers it”.

One patient said the minor ailments service is useful for “the things you don’t want to bother the doctor with, but [that] still get in the way of day-to-day life”, according to CPS.

Another said a pharmacist’s advice “can save a doctor’s appointment for patients with more serious conditions”, CPS reported. 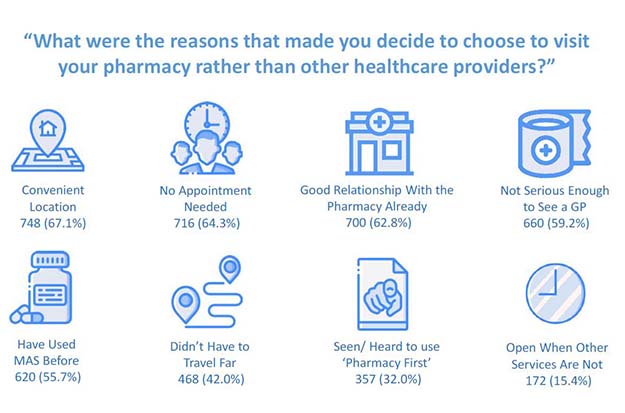 Source: CPS: A mixed methods national evaluation of the experiences of service users of the minor ailment service

CPS said a theme among the answers was patients “being unable to access a GP appointment”, while 64% of respondents said they chose to use the pharmacy service because no appointment is required.

It acknowledged that “there may have been biases in response” to the survey, because the minor ailments service is provided for free.

The most frequently reported ailments related to allergies (29%), followed by skin complaints (16%), gastrointestinal issues (11%) and infections (10%), according to the report.

Patients don’t use other healthcare services

In a follow-up survey conducted one week after the patient had used the pharmacy scheme, 86% of 327 respondents reported not having used another service, with only 6% having consulted a GP.

The minor ailments service in Scotland

Minor ailments constitute 13% and 5% of GP and A&E visits in the country respectively and cost two and four times more than comparable treatment in community pharmacy, according to research from 2014 referenced in the report.

In 2017, CPS attributed the fact that the majority of the population have not registered with the service in part due to only 60% meeting the eligibility criteria – which includes under-16s, under-19s in full-time education, over-60s, individuals on jobseeker’s allowance and asylum seekers.

In its 2018-19 national programme, published in September, the Scottish government said it will be “developing and implementing a redesigned minor ailment and common conditions service available to all in the coming year”.

Answered: Are you to blame for abusive behaviour at a Christmas party?
08/01/2019 | 1 | Features
3 Comments
Question:
Does your pharmacy offer a minor ailments service?

"""they are not willing to pay for the meds otc"""

I think they are talking about Minor Ailments (Service) which is free in Scotland and also more advanced than in rest of the UK!!!

MAS is running brilliantly in Scotland probably, but in the rest of the UK it is a complete shambles. It is taking too much time, paperwork and training with minimum increase in monetary return, which in turn is not worth it at all. I can tell you 95% pharmacies in England don't offer this MAS

Except they are not willing to pay for the meds otc. We been saying see pharmacists first blablabla for ages but the reality is most patients who don't pay for their scripts are not willing to buy meds otc! and don't forget these are extra workloads with a forever declining staff level and resources. We are expected to ease gp pressures but now we can't even do our own job properly with all these cuts! The new direct referral from gp to pharmacies is just another nail on to the coffin.