Hub-and-spoke dispensing can be both an "opportunity" and a "threat" for community pharmacies, Day Lewis executive director Jay Patel has said.

"It isn’t any safer; actually it is a lot less safe [than traditional dispensing models]."

Mr Patel said Day Lewis has had a “single dispensary” serving 30 of its 300 branches “for about four years”.

“The only opportunity we found in [using] hub-and-spoke was to relieve a little bit of pressure from the pharmacy team, to be able to engage patients and take a more clinical approach,” he said.

A hub-and-spoke model can be “quite useful” if a pharmacy is struggling to manage its prescription volume, Mr Patel added.

“In those 30 pharmacies, we took on around 10% of their prescriptions,” he explained. “If controlled, [hub-and-spoke] is an opportunity to free up people's time.” 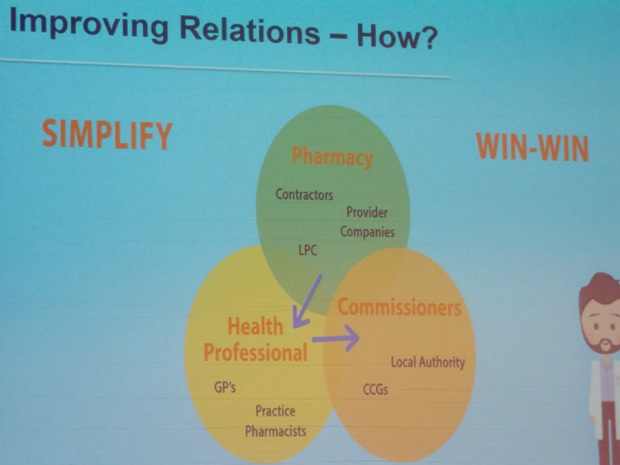 Mr Patel used his session at the NPA conference to stress the importance of building relationships among local healthcare providers and wider policy makers “for the survival of community pharmacy” (see slide above).

“If we don’t get involved…your skills and expertise will be forgotten,” he warned the audience.

However, “the first and most important relationships we need to build are within community pharmacy itself”.

“We are a community of pharmacies. We need to have better knowledge of what is going on in community pharmacy in local areas.”

Mr Patel said pharmacists should be asking themselves: “Who is doing the services? Who is the great medicines use review pharmacist? Who is doing all the flu vaccinations? And who do we need to support, because collectively we’re only as good as our weakest.”

The skills of “getting out in front” of people, building relationships and collaborating, is how Mr Patel learned to progress both within Day Lewis and outside of it, he added.

I am no fan of "hub and Spoke" as promoted by the DOH  but From a Day Lewis perspective, it is being used to support busy Pharmacies to free up time to do other services, with no reduction in staff,

I appreciate that that isnt what will happen elsewhere, but that is what Jay is putting forward.

in the end, RX income is falling, you can whinge and resist all you like but if you dont do the services you are missing out on income for the business you work in which makes less money available for salaries, and you are handing a gift to your employer...

We have people out there doing great numbers of Flu vaccines, MURs NMS etc and its all about how you make it happen, the idea is to learn from others rather than saying it wont work for me...that way is a dead end, possibly literally for one or two of your patients.

we need better sevice income but the thing that is held up is that we dont do what we have...

after that its your choice how you want to progress - the restof your career initialling boxes for diddly squat or developing services for possibly more...

I am not sure why you think service income is important ... it is only a small percentage of any pharmacy's sale. We are in a situation where the tradition is pharmacists will do anything for free just so that they can be called 'clinical', and doctors won't do anything unless it is paid for.

The other dimension is people like Jay Patel, does he really care where the profits come from; squeezing his wholesalers for another percent or using fewer pharmacists? Quite clearly, profits and the interests of pharmacists, pharmacy contractors and pharmacy as a whole are not aligned.

Kevin, be honest and say how much percentage turnover did services bring in? I am talking about MURs, NMSs, Dementia Friends, vaccinations, PGDs, smoking cessation, healthy living champions etc etc ... Then there is the professional point, did you do MURs for your patients so not to "missing out on income" as you stated?

Im fully aware its currently a drop in the bucket, but, and its a big but, script income will continue to decrease and volume increase is slowing a bit at the mo, so income has to come from somewhere or salary spend goes down wether you are an independent or multiple - its life.

we need more services, we need to prove we can do the ones we have and we need to stop moaning about them.. MURs are getting hackneyed and need refreshing, NMS is v popular with patients and should be with GPs if they would listen., flu is a great service. we do smoking cessation, slowly recovering after the hit it took with e cigs, health checks- gives reassurance or prevents stroke etc.. got to be good!, Private pgds and travel vaccinations. still a tiny fraction of ovcerall income but growing and you have to start somewhere.

I honestly enjoy MURs particularly for new patients and Asthma patients - the number whose technique/understanding is poor is huge. i find doing Flu brings in new patients for MURs - a double whammy

I generally dont have a problem doing 400 murs in a year ( a bit tight last year i admit as I was out of branch for a while) and it seems to go down well with patients who see it as a help and shows we care.

I admit there is some pressure from a finacial perspective but it doesnt make a lot of difference to me.

As for Jay, He is running a large company and is responsible in many directions, not least of which is keeping his staff in employment - difficult if income goes thro the floor.. 300x400 murs is not an insignificant sum as a figure with little or no costs attached..

Profit is a requirement for all businesses as Im sure you know.

Do you have a business under your control that can afford to miss out on the income from MURs? they must be good ones if thats the case.

Kevin, it is my passionate believe that pharmacy going 'clinical' with services is the wrong direction, and it is the main reason why the DoH constantly say pharmacists can act as second class clinicians to take pressures off GPs cheaply - for example, I am sure you are aware of the politics surrounding the bird flu/tamiflu episode.

As to whether a pharmacy can afford to miss out on the £12,000 (approx) MUR revenue, may I ask you a reverse question; if a pharmacy have to rely on £12,000 worth of MUR money to survive, is that a healthy business? However, I do work for large multiples, and I have been constantly asked this question by the superintendent. In a previous job, there was a four year period when I did not push MURs at all, my weekly regional conference calls concentrated on professional and financial performance while the other regions wasted their conference calls on dishing out MUR targets, naming and shaming 'poor performers', top tipping MUR experiences, arguing about who is best to be the MUR champion etc - they spent 80% of their conference call time on something that brings in a couple of percent (at best) of turnover! You get more by squeezing AAH or Unichem.

You mentioned falling prescription income, I place that blame squarely at the doorstep of Susan Sharpe et al at the PSNC. I do have a view on how we can reverse that trend, but I think it is a bit too controversial to say in an open forum.

ps none of the stores closed as a result of me not pushing MURs. I also think I had a happier pharmacist population who were more willing to try new things. My financial performance wasn't in question either, it was never a subject of contension in my appraisals.

Looks like we will have to differ on the clinical aspects, I like to be out of the dispensary as much as possible and talking to patients. I cant see why you cant be happy in the job AND do MURs

since the MUR money effectively goes straight to the bottom line, it is worth more than the equivalent income from scripts. Pressure has beenmuted over MURs tho, as I say, it is growing. Not unbearable yet. There is no naming and shaming here either.

I cant see any harm in sharing best practice, and if that is seen as pressure, what does it say about the recipients?

I think, if you look back over my posts you will see that mrs sharpe isnt my cup of tea either and the parlous state of the Profession can be laid at the door of the Pharm Soc RPSGB and PSNC,

Have fun, but dont get too engrossed in initialling labels.. the job might disappear around you...

If you use the right 'Hub and Spoke' model it is clinically safe and has been proven to free up staff time at the spoke to provide extra services and interact with patients.*

*This comment has been edited for breaching C+D's community principles*

“Who is doing the services?"

"Who is the great medicines use review pharmacist?"

"Who is doing all the flu vaccinations?"

"And who do we need to support"

Sure seems like a lot of those tasks are pharmacist only (granted I delegate a lot of smoking cessation). I'll be sure to pass the information on to the area manager... support the pharmacist!

Mr. Patel's implication that the 'weakest' pharmacists are those that are providing the fewest MURS and flu vaccinations is typical of a short-sighted management level. I'd suggest if his management staff have this attitude, it's them that need to change and not the pharmacists. What he means is 'less profitable' pharmacists - let's be accurate here. The fact that your worth is judged on the number of MURs and flu jabs you do is a sad, sad reflection on this so-called profession.

Just shut-up. C&D, please don't publish these things, just because you get paid !!!!

I think Mr Patel need to specify what he means in relation to opportunities and threats, is he speaking as a contractor or as an employee pharmacist? Surely, a man of his intelligence, he must realise that the interests of contractors, pharmacists, and the DoH are not singularly aligned. If you read this article with that in mind, his utterings becomes quite confused to me, quite meaningless.