A total of 1,916 pharmacists and pharmacy staff completed the C+D Salary Survey 2018

The average salary of a non-manager pharmacist is just under £36,000, according to the C+D Salary Survey 2018.

It marked the continuation of a slow but steady rise over the past three years, with salaries for non-manager pharmacists increasing by an average of £292 a year between 2015 and 2017. 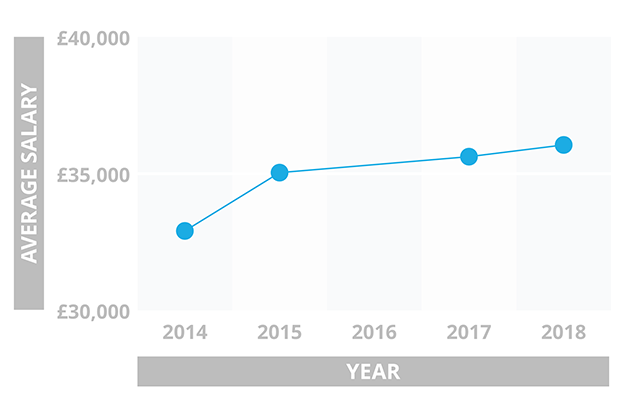 Some 44% of second or non-manager pharmacists who completed the survey said they were dissatisfied with their pay. One pharmacist who earned between £45,000 and £49,999 at a large multiple said: “Pharmacists are very underpaid compared to GPs, dentists and opticians.”

“We are being asked to take on more of GPs’ work, but we are given no additional resources to carry out this extra work,” they added.

This was echoed by a pharmacist at another large multiple. “Pay for pharmacists should be banded like NHS pay scales,” they said. “I have masses of experience and provide lots of services, but am only paid [the] ‘average’ for my company. I deserve more.”

When it came to bonuses, 46% of non-manager pharmacists said they received one in the past year, while 54% did not.

Half of non-managers work unpaid overtime

However, C+D's findings suggested the slight increase in the average non-manager's salary may have come at a cost, with half (54%) of respondents saying they work an average of between one and five hours unpaid overtime a week, and 10% saying they work between six and 10 hours.

I'm NQ, and currently earn £50,000/year 45 hours/week as a relief manager, and I just qualified last month! The pay in pharmacy is really not bad when compared to other graduate professions. I don't understand why there is so much doom and gloom amongst 'experienced' pharmacists, especially on social media forums like telegram and twitter. Let's have some positivity lads!

I'm guessing the downvotes to my comment are from the negative-minded individuals intent on drowning NQs in negativity.

I'm NQ, so I might be a bit naive. However, I totally believe that pharmacy is what you make of it. You can choose to be innovative, positive and future thinking, or you can choose to be negative and surround yourself with negative people. I see a lot of negative groups of 'experienced' pharmacists who lounge on twitter/telegram all day discussing how to 'negotiate' an extra pound sterling to their locum rates. Their postive and innovate colleagues elsewhere are brainstorming on how to integrate technology, improve patient experience etc, they are more interested in how to earn an extra pound on christmas day!

I’d love to see where you are in a few years,they say there is sooo much progressions in community pharmacy.in fact they say it is a career.

I am really surprised at that.... I was a pharmacy manager at a multiple a few years back and had atleast 3years experience before my managerial role and I was being paid £44k for 50hrs a week.

I find it hard to believe a newly qualified is being paid 50k for 45hrs....

You can get that sort of wage,but 45 is a lot of hours to do.

They are continually lowering locum rates to give salaried staff a pay rise. Robbing Peter to pay Paul.

Also of note is that the prospect of career (and salary) progression in community pharmacy is close to zero. Experience and additional clinical qualifications count for little.

Only by trying to climb up through management tiers can you hope to progress.

Hang on so I have zero clinical responsibility and the chance of putting someone in harms away is zero and I get £36k? Please tell me where I can sign up?

I just want to clarify that the comment was written in jest.

How else do I convey my disappointment that script volume has been increasing annually and more services are being piled onto pharmacists whilst in 2010 average starting salary for a non-manager pharmacist was £34K if you factor in inflation it should be at least £41k now so salary has gone down in real money whilst responsibility and stress has shot up?

Did you think it said non- pharmacist manager rather than non-manager pharmacist??

R A, I'm worried for your patients if you think as a community pharmacist you have zero clinical responsibility or zero chance of putting anyone in harms way.

He was being sarcastic and referring to the fact that a second pharmacist is unlikely to be the RP most of the time.

He was being sarcastic

Thanks for understanding been in the pharmacy for too long now hence the dark humour.