Some candidates gave “implausible” answers in June’s pre-registration exam, according to the General Pharmaceutical Council's (GPhC) board of assessors.

As part of feedback published in its annual Pre-registration Manual last Friday (August 4), the board of assessors advised the newest cohort of pre-reg trainees to “consider whether each answer is realistic and practical” when they come to sit the exam themselves.

The board gave examples of some of the "implausible" answers candidates wrote in the first of the June assessment's two papers, including calculating that “100 ampoules” of a medicine are required for an infusion for one patient; and suggesting a dose of “403mg every 12 hours” when the medicine in question is available as a 400mg tablet.

Other areas where candidates did “less well” in paper one included questions about infusion rates– where they tended to “miss the information on the duration of the infusion” – as well as questions where “dose rounding” was required before calculating “total supply”.

In paper two, one of the five areas where candidates also “performed less well” was questions testing the differences between an "adverse drug reaction and an allergy". Another was deciding when to refer a patient based on their symptoms, the board said.

In addition, some candidates “did not fill in the answer sheets clearly” (see image below), although “most” did. “Marks cannot be awarded if the answer is not clear,” the board stressed. 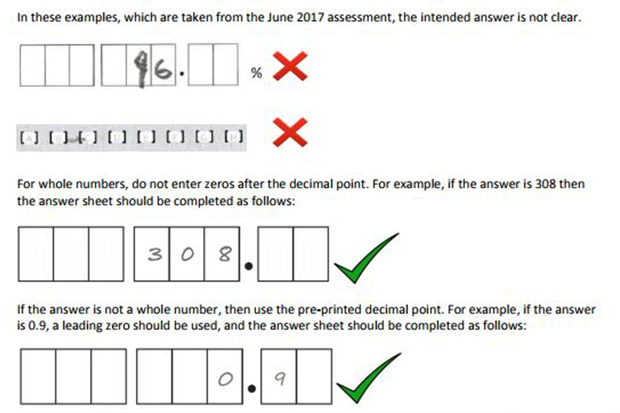 How the feedback works

The report comes after the GPhC received feedback from the British Pharmaceutical Students’ Association (BPSA) in a meeting on July 11, based on 583 students who raised issues with the exam, including a lack of time and questions not representing the registration assessment framework.

The pass rate for the June assessment dropped 17 percentage points compared with the previous year.

The GPhC told C+D yesterday (August 7) it had published specific feedback on paper on of the exam after it was requested by the BPSA. The board of assessors will include the BPSA feedback in a separate report to its council in September, it added.

The regulator said its analysis of the June 2017 exam had not uncovered any significant issues, so next June's paper will be prepared in the same way as this year’s.

What is our obsession that everyone should pass?

"The pass rate for Part 1 is about 50%, among UK trainees sitting it for the first time. This figure is about 60% for PACES and 80% for Part 2 Written. You can see the full pass rates, including those for international candidates, here."

Just one example, Bradford have places in clearing still. I haven't bothered to look further. http://www.bradford.ac.uk/undergraduate/clearing/courses/?loc=US

There is a simple situation where volumes are going up and standards of students are going down. If the academic institutions are going to shamelessly continue to churn out so many frankly, sub standard students, then some control on quality is required.

Given the situation, I would advocate raising the standards further and push the pass rate down to closer to 60%. Make it an exam you need to be actually good to pass!

With regard to calculations, the GPhC is, in my view, absolutely correct in posing such questions and marking the example answers given as incorrect. When calculators were first made available, our Maths teachers demonstrated how they could be used to 'play games' by producing words when turned upside down and also how we could test their limits by repeated calculations that resulted in an ERROR message. I.e. they were simply tools to help us. I always supported their ban from the pre-reg exam. Now they are allowed, the problem of individuals being unable to apply the 'abstract' number generated on the display of these tools to provide a practical and sensible answer to a calculation question is being exposed. The calculator doesn't 'produce' the answer, the Individual using the calculator does. Ask undergraduates what alchemy results in the majority of drug doses being 1mg,2mg, 5mg, 10mg, 100mg, 250mg etc etc. rather than 9.6mg, 15.3mg etc. etc. and most cannot come up with the answer. The GPhC, as demonstrated by the questions above, is  checking on a fundamental aspect of pharmacy practice - the ability to apply mathematics to real life situations - and it is correct to do so.

Perhaps the GPhC should make the questions more representative of what the typical candidate will encounter upon registration? Maybe something along the lines of... "In a typical week, to meet the annual limit of 400 MURs, how many should you perform?" Or maybe "Give an example of a limit that is also a target".

If the examples cited are correct, the issue is nothing to do with the exam and everything to do with the students. Now, it may not be that the student is at fault, depending on the preparation they did but if they don't have enough awareness to realise that suggesting, as in one example, a dose of 403mg when a 400mg tablet is available, that does not bode well. Without additional information, it may well be that the accuratly calculated dose should have been 403mg but, and this is where the pragmatism has to kick-in, not to realise that the best you can manage is 400mg, does seem like a school-boy error