Carol Alexandre: Everyone else is doing many more MURs than independents

Independent pharmacies in England are “trailing behind” their competitors when it comes to delivering medicines use reviews (MURs), data analysts have concluded.

NHS Business Services Authority data shows that 87% of independent pharmacies were claiming for less than the annual maximum of 400 paid MURs in the 12 months to October 2017 (see image below), according to Carol Alexandre, director of information offerings at Iqvia – formally IMS Health. 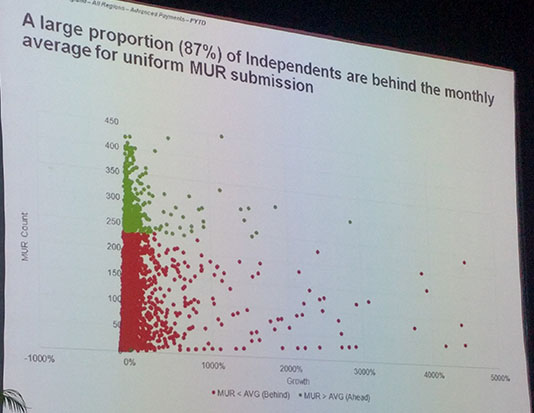 “Everyone else is doing much more in terms of MURs than independents,” Ms Alexandre said at Sigma Pharmaceuticals’ annual conference in Borneo on Monday (February 12).

She asked why, if independents are “increasing [their] market share across the country”, they “are trailing behind the market rate of MURs?”.

“I don’t know the answer,” she admitted. “I was quite surprised by that.” 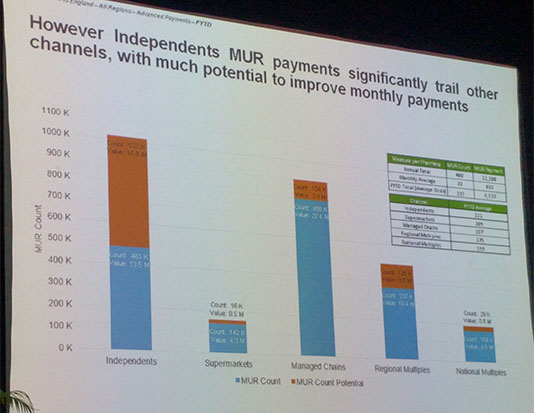 In comparison, “managed chains” – which comprise fewer pharmacies than independents – and which Ms Alexandre categorised as distinct from “national” and “regional multiples”, delivered over 800,000 MURs during the same period, Ms Alexandre added.

This NHS data shows there is “untapped potential” for independent pharmacies in England to deliver services, she concluded.

Former Boots pharmacist who submitted 138 incomplete MURs struck off
02/10/2017 | 36 | News
28 Comments
Question:
How many MURs does your pharmacy deliver a year?

This article is a joke to anyone who actually works in community pharmacy, because we already understand fully why this is. People have already mentioned why here in these comments.

The big chains constantly contact their pharmacy managers (and locums) via either phone or email, to apply varying levels of pressure to perform said services. And of course this pressure will ramp up if you don't perform. I have witnessed naming and shaming, and humiliation tactics being used on branches which constantly under-perform, irrespective of whether or not they have enough staff or regular pharmacists.

What happens if you don't perform? Performance management, removal of bonus, disciplinaries and further belittling tactics. And if you're a locum, they will threaten to not book you again! Ridiculous.

Why does the GPhC not care about this? Because *yawn* they only protect the public so couldn't give a rodent's backside that the people who pay their fees are being bullied and mistreated. And YES, this is putting the public at risk because they are being served by pharmacists who are being expected to perform more work in 8 hours (with no breaks) than they can realistically do in 10. But it's too much work so they can just rest nicely in their Herman Miller office chairs and ignore it.

And I am pretty sure that the GPhC recognises that nine times out of ten, the person applying the pressure is not even a pharmacist so they just cannot be arsed to get involved because it might be too much work for them. It might even open up a massive can of worms for the industry and they don't want that, so just keep ignoring it like the grandparent who refuses to acknowledge the fact that they have got cancer.

Independents are far more likely to be decent, professional pharmacists who genuinely care about their customers because they know them. I am sure they will feel embarrassed to ask a customer of over ten years to have a chat about their medicines despite the fact that they are clearly in a hurry and don't need it.

The difference is, with the chain, you can lose your job if you don't hit that 8 per week, completely irrespective of whether or not anyone actually got any benefit, which is absolutely CRAZY after a 4 year masters and pre reg where you are taught about code of ethics and patient well being over everything.

Pharmacists in every town are being FORCED to perform services on a daily basis, whether the patient wants it or not, and whether the pharmacist considers it clinically appropriate or not. Why? Because the only thing that counts is the numbers, and the PAYMENTS (which the pharmacists almost certainly will not be getting).

It is quite ridiculous that they are even called services. The only people who benefit are the CEOs of companies who don't even pay tax in the UK, in the majority of situations, and the shareholders!

Most of the time, the people doing the work get absolutely nothing which is basically modern-day slavery!

It seems very, very strange to me that if I, as a patient, am given a dispensing error the GPhC will be on my side and help me. But as a pharmacist, and a fee payer, they couldn't care less about the fact that I have been forced to work in conditions which have ultimately destroyed my health and my family life.

The key message is that the professional independence of the pharmacist is compromised, by being forced to provide professional services (for which he /she is acountable)  directly and indirectly by the slavemasters.The key remit of the MUR's is that it has to be of benefit to the patient., and that is overridded by greed to fill the coffers, mainly the corporate multiples.

The interference of the pharmacists independence is within the remit of the GPHC to deal with, but will they do so?????? ....... No, because the R.P. regulations and professional rules are a complete and total farce.

The quality of the majority of MURs I encounter on my travels is bordering on useless. Actions and/or recommendations are in most cases blank! £28 for ticking a few boxes is hardly money well spent by the NHS!

Well said, Boom. That echoes my experience too. I think we need to objectively assess the value of MURs to the health service. My suspicion is if the NHS abolishes MURs, we won’t see any increase in the general population’s mortality rate or decrease in longevity.

But if the NHS abolishes MURs, which I support whole-heartedly as it's a massive waste of everyone's time, would that £11200 per year be put back into the pot to pay for dispensing? Absolutely no chance, mate!

Oh God, not again!! How many programmes and articles is it going to take to get EVERYONE including data collectors, analysts to sit up and listen - as all teh pharmacists have said, it is a numbers game, and the multiples are great at stacking up numbers as it translates into £££! The real question here should be the QUALITY of MURs performed - do they meet the contractual requirements as to time, location etc. Now that would be an eye-opener!

If pharmacy chains were actually run by pharmacists, they might like to hear about great MURs you have done and how much your patients have benefitted. But, alas, the companies are run by greedy corporate penny pinching people with yachts and art collections, and they only want to hear how many MURs you have done. They could not care less about what the topic of the MUR was. I doubt they would even understand what you were talking about if you told them a patient was using a salbutamol inhaler incorrectly. They only understand pounds, euros, dollars and probably bitcoins, i.e. how soon can I buy my next Picasso/yacht/helicopter?

The logical answer is due to change in requirement MUR's now have to be targeted and patients are only eligible if they meet specific criteria. This reduces the pool of patients they can conduct an MUR on.

Scrap MUR's. Put this money back into other services that 'actually' will make a difference to patients, and not, a numbers game!!!!

I think she should have extended her research into determining the quality of  MUR's and the ratio of refrerrals/non referrals to the GP's and also why the multiples managed to reach the targets;, Was it because of patient benefit or purely for financial gain!!;;; I think we all know the answers..

This shows independents in a good light.  Not milking the system

Lol...,they just order everything on a patients repeat, more profitable than MURs and yes I’ve seen it done .

We don't order for patients.  I've seen lots of things done too, but the topic here is MUR's.

It’s all a numbers game. Multiples dare challenge any Locum if there was a shortage. However the market is flooded with locums who can either 1. Take a morale stand and not work for a company or do it to put food on the table. Things will never change until there’s a cap on student numbers

Also heard from conference calls that any Locum that doesn’t carry out two Murs a shift should not be re booked or any shifts that they are booked for are transferred to other locums that toe the line. FLOOD THE MARKET WITH LOCUMS and there’s only one winner.

Just a one question. Aren't MURs meant to be performed when and where there is a need? Or is it forced onto a patient becasue a pharmacy has a quota to meet?

I have seen managers in multiples doing MURs at the front counter. I hv seen locums do Murs in under a minute just to get the high hourly rate at tesco.

Report the multiple to the GPhC so they can protect the public from this dangerous practice. I'm sure they'll welcome your call.

The fact that certain multiples have pharmacists who, if they are not needed to cover a pharmacy that day, can be parachuted in to a local branch and knock out 20 high quality MURs in 8 hours flat and then leave the "writing up" on the PMR for the poor sod of a pharmacist the next day, might explain.

The fantastic GPhC should look into this.

GPhC only protect the public. You should know this by now. So they will do nothing, of course.

Spot on... The answer is staring them in the face!

Perhaps because pharmacists in the independent sector are unlikely to face disciplinary action for failing to meet the “non-negotiable” target of the maximum number possible that the large multiples impose?

The fact that she is "quite surprised by that" shows how well she has her finger on the pulse!