London pharmacies and Weldricks to offer £35 Strep B service

Six of the capital’s independent pharmacies and “around 30” or more Weldricks branches plan to sell Streptococcus group B (Strep B) home testing kits, C+D has learned.

Community pharmacists will be able to purchase the testing kits for £1 each – in packs of five or more – from the beginning of May, said Mark Robinson, director and pharmacist at consultancy firm Connect2Pharma, which has designed the service that the London pharmacies and Weldricks will be offering.

Under the Connect2Pharma service, each test will be sold to customers for £35, and pharmacies will have to pay £28 once the individual receives her swab results from a laboratory in London.

According to the charity Group B Strep Support, Strep B – a bacteria typically found in the vagina or digestive system – is the most common cause of life-threatening infection in new-born babies, resulting in sepsis, pneumonia and meningitis. One baby a week dies from the infection in the UK, the charity said.

Testing for the bacteria is not routinely available on the NHS, but patients who want to get tested can do so privately or order a home test online.

Ms Shah said she was “not confident” when presenting the service to her fellow local pharmaceutical committee (LPC) members in London, because Strep B “doesn’t affect that many people” and the cost of the test is “steep”.

She was "amazed" that board members agreed and now six LPC members are trialing the Connect2Pharma service, as well as encouraging other contractors to sell the tests, she said.

“There is a goodwill factor here, and community pharmacy is in an ideal position to help raise awareness and give women that choice," Ms Shah said.

“We know we have to continue with a private service agenda, especially as we’re starting to feel the pinch of the [funding] cuts and category M clawbacks are really biting."

Despite the small profit margin, "there are possible long-term gains with this service”, she added.

Weldricks superintendent Richard Wells confirmed that the pharmacy chain is also looking to provide the service, and will aim to stock the tests in “every community that Weldricks is in”.

Mr Wells explained that there has to be a commercial element to every service the chain provides – which is part of the reason why it decided not to adopt the Strep A sore throat service, also available through Connect2Pharma.

“The board [of directors] didn’t need convincing when I approached them about the Strep B tests,” he told C+D.

“The outlays are not that much… and it aligns with our family philosophy – serving women pre-pregnancy, during and hopefully long-after.” 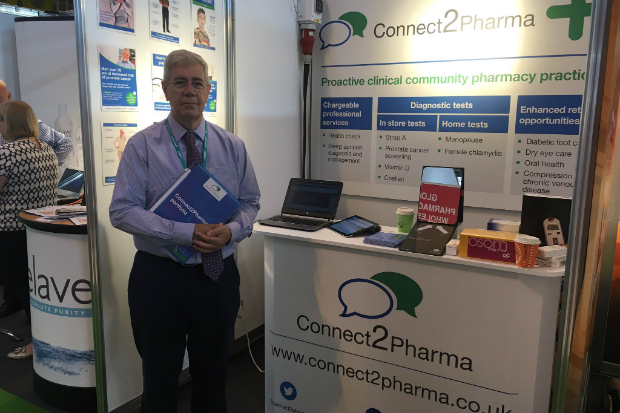 Connect2Pharma's Mr Robinson (pictured above) said "it is as much about raising awareness", as it is about making money.

“Every pharmacy will have 60 or so pregnant ladies within their catchment area every year, and meaningful conversations with them can often reveal a whole host of other problems, including tiredness, pains, stretch marks [and] reflux,” he added.

“It is a really valuable thing for community pharmacy to engage with women during pregnancy.”

Report argues set fees for pharmacy services are ‘perverse'
03/01/2017 | 4 | News
1 Comments
Question:
Would you consider selling the Strep B test in your pharmacy?

Far too expensive! Should be free on the NHS - use the money we'll be saving on gluten free foods to fund it.