Michael Keen: Our masters in government have a contrarian approach to pharmacy

A government scheme to refer patients with minor ailments to community pharmacy via NHS 111 is a “problem waiting to happen”, a local pharmaceutical committee (LPC) CEO has warned.

The Department of Health (DH) announced plans last year to develop a “new approach” in which NHS 111 would refer patients with minor ailments – such as sore throats and bites – to community pharmacists for advice and medication. The scheme will not receive extra funding and instead be "undertaken through 'business as usual' work", it told C+D at the time.

“We have a problem brewing,” Mr Keen said at an event set up by policy conference organisers Policy UK on Wednesday (May 24). He called on the audience to help him “tackle” the DH’s minor ailments strategy, as it has “gone under the radar.”

By 2018 – when the NHS 111 minor ailments scheme is due to be evaluated – it will not have been "awarded the time" to make it a success, because clinical commissioning groups “are not aware” of it, Mr Keen said. 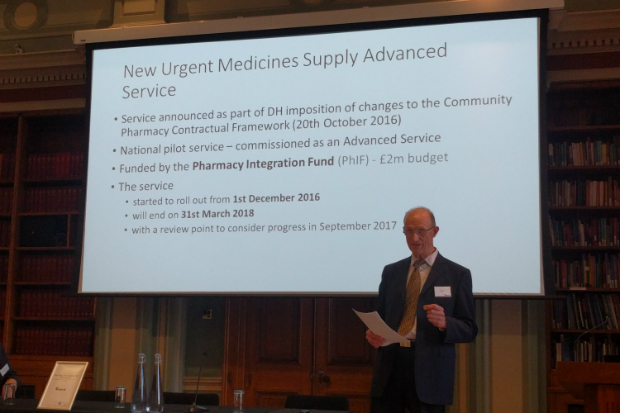 The LPC chief also used his session at the Policy UK event to criticise the government’s Urgent Medicine Supply Advanced Service (NUMSAS) – which he said was an “awful acronym” for service that for the most part, pharmacy is already providing. The pilot scheme will see patients who call NHS 111 for urgent repeat medication directed straight to a community pharmacy, instead of an out-of-hours GP surgery.

“There is no consistency,” he explained. “Despite plans to include the use of community pharmacies in delivering emergency care and to develop our role, [the government] cuts our funding.”

“This is a contrarian approach by our masters in government,” he said. “I was asked: are we ready for the role? Yes, we are ready – because we’re already doing it.

“[NUMSAS] is totally underpaid, but at least it is there,” he added. However, he stressed that “the system” is not ready for pharmacies to make the most of the scheme.

“Our government and chief pharmacist do not understand the added benefits that community pharmacy brings, or they are not interested,” he added.

The best way to prove pharmacy’s case to policy-makers is to “get MPs onside”, Mr Keen said. He called on the audience to lobby their local MPs, especially during the general election period.

The only reason Minor Ailment Scheme is not working properly is that it is not well resourced, not well advertised. not well organised and not well informed at all levels .Pharmacist are ready deliver services and save NHS monies but there is not impetus at a higher levels of the  NHS to funding and resources.The days of Pharmacists working for free are finished.

NHS England no longer has the man power or perhaps even the expertise to plan, develop and roll out a successful service to patients. A "bodge" is often made and then LPCs are brought in to sort the mess up, by which time the contractors have lost confidence in the service.

If we are to have succesful community pharmacy services then commissioners need to work with community pharmacy. Why was (and still is) the London Flu Vaccination service so successful? Because the commissioner realised that the expertise in plannig had to be shared with the provider and as such they worked togther to provide a very successful service to Londoners.

NUMSAS, the less said the better! NHSE brought an unfinished, half baked and untested product to the market and then wondered why it is failing. Who in their right mind would bring a "paper based solution" in the 21st centuty?

I wonder if this below the rador plot to dismantle the NHS, provide really poor services that patients start to pay for them privately. Meanwhile, the political elites can keeping saying we're investing and the NHS is safe in our hands.

Not well thought out. A bit like a school bully (DoH), just poked you in the eye and taken your sweets, then just for good measure gives you a kick in the shins.

Very bitty approach rather it should have been a full review of pharmacy services with DH and PSNC to address a national OOH repeat medication supply role and minor illness service.

Why does it seem Community pharmacists are forever boot licking but for their troubles just keep getting kicked in the knackers??

I think the problem is a lot deeper than a simpleton like me but whatever help you sleep at night.

Sorry Non Pharmacist Branch Manager, I'm with David on this one, all the problems this industry faces are your fault entirely.

Absolutely. I even singlehandedly opened up schools of pharmacy across England and at the same time lowered the criteria to get accepted into them. I have also been working on designing robot dispensers on the weekends. I apologise from the bottom of my heart.

I'm sure some blame could be placed at the feet of non-pharmacist area managers, and possibly non-pharmacists higher up the corporate ladder...