The IT systems pharmacists are using to communicate with GPs for the national flu service are “working extremely well”, according to local pharmaceutical committees (LPCs).

Following NHS England's revelation last month that there will be no national IT system for the service, LPCs told C+D they hoped to use PharmOutcomes to allow contractors to notify GPs of patients they vaccinate.

The same LPCs told C+D this week that IT systems are up and running in many areas.

Hertfordshire LPC executive officer Helen Musson told C+D that contractors “really like” using the tool, but many are still “getting up to speed” because they are new to the system.

“GPs are happy that an electronic system has been commissioned, because every [vaccination notification] is going straight to them,” she said.

Devon LPC chief officer Sue Taylor told C+D that pharmacists can access PharmOutcomes, but the LPC is not able to see any data entered, which is “frustrating”. “We’re not able to see activity,” she said.

London is the only area that told C+D it had opted to use the Sonar data tool instead of PharmOutcomes, and Pharmacy London chief executive officer Rekha Shah said the system is working “extremely well”. “It provides commissioners with live data at any point in time,” she said. 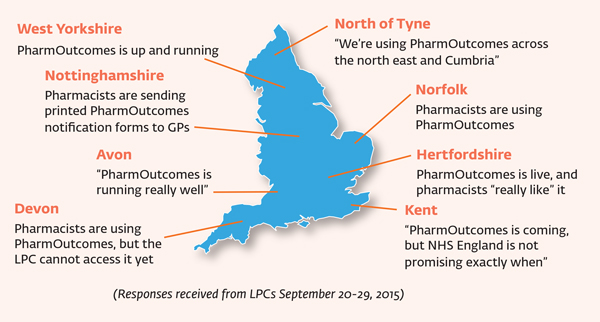 Posted on Mon, 12/10/2015 - 17:03
This article is misleading as the people who use it were never asked how well the service is provided. I only complained about the service today and got a phone call from the CEO to resolve my problems. This directly shows the lack of staff involved in the company and surely more experienced and more resourceful companies should be used.

Posted on Fri, 02/10/2015 - 22:30
I find pharmoutcomes slow and much more labour intensive than a good old paper copy that notifies the Dr. The patient can fill it out themselves to, 1 less thing for me to do, current IT solutions are ok if you just do low numbers but I have vaccinated 51 people today, we only have 1 computer and 48 hours to notify the GP. Im sure the Dr's don't like the paperwork though!