Kenny Gibson: Delays were due to desire to launch service "correctly"

NHS England is "committed" to launching the national flu service earlier next year, a senior commissioner has pledged.

The commissioning body will hold discussions on preparations for next year’s service in January and June 2016, with the service "up and running for September", said Kenny Gibson, head of immunisation at NHS England's London team.

PSNC said in July that it expected this year's service to launch at the start September, but NHS England only published the final documents contractors needed to start the scheme on September 16.

A third of 116 respondents to a poll, posted on the C+D website September 17-22, said earlier publication of the documents was the “one change” that would have most improved their preparation for the scheme (see graph below). 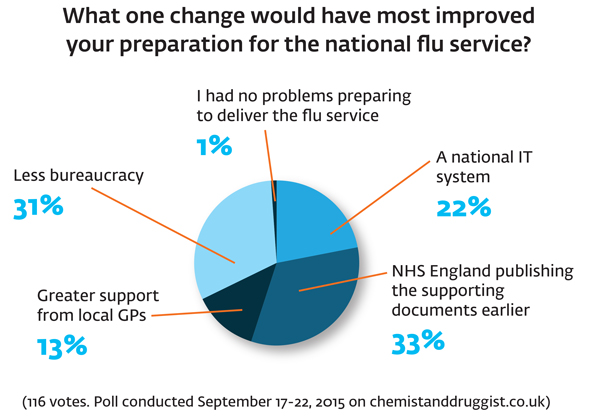 Mr Gibson defended NHS England’s late release of the paperwork at a C+D webinar on the service, sponsored by Actavis, last week (September 30).

Taking time to publish the documents had ensured that both the public and contractors had “confidence” in the new service, he said.

“Delays are often caused because a new delivery model can take up to 12 weeks [to get] through the governance systems. This time it’s taken us eight weeks to get paperwork ready,” he said.

C+D reported last month that pharmacists had sought training to help complete the declaration of competence necessary to deliver the service, and Mr Gibson stressed this document is “standard practice when we're trying to get increased capacity [for] a clinical service".

Completing the declaration now will make it “simpler” for pharmacists when they complete others in the future, he said. “It’s the modern way that professional practitioners work,” he added.

How did delays to the start of the flu service affect your patients?

Following the launched of the service, pharmacists rushed to sign up for help to complete their declaration of at Centre for Pharmacy Postgraduate Education (CPPE) workshops.

Posted on Sun, 18/10/2015 - 11:28
A national IT system is a waste of time. Most LPC's use pharmoutcomes or equivalent - lets stop wasting time, money and effort on something which already is in place and can be utilised. This was the first year for the national service and as long as everything is in place for the 1st September next year so we have a level playing field with the GPs pharmacy will be able to show its worth in the delivery of an important service.

Posted on Mon, 05/10/2015 - 17:44
1. Why is it necessary to have signed consent. GPs don't get signed consent from patients before giving a flu jab 2. Do GPs complete this Declaration of competency? I think not!