NPA: "Wherever the public eye is, wherever the politicians are, that’s where we’re trying to be”

Many people still believe the cuts to the sector’s funding are on hold “indefinitely”, C+D learned as it joined the National Pharmacy Association (NPA) on the anti-cuts campaign trail last week.

While there is “increasing” public and government awareness of the value of community pharmacy, “a lot of people” think the cuts to pharmacy funding are “completely on hold”, the NPA’s head of communications Stephen Fishwick told C+D on Friday (October 7).

“We have made it our business to clarify that,” he added.

In September, pharmacy minister David Mowat announced that the government's proposed £170 million cut to pharmacy funding in England is to be delayed beyond October. But just a couple of weeks later, the Department of Health (DH) confirmed in a letter to stakeholders that a funding "package" for community pharmacy in England would be announced in mid-October, to be implemented in December.

At the time, NPA chairman Ian Strachan said: “In what sense is a brief negotiation behind closed doors the ongoing dialogue we were promised just days ago?” 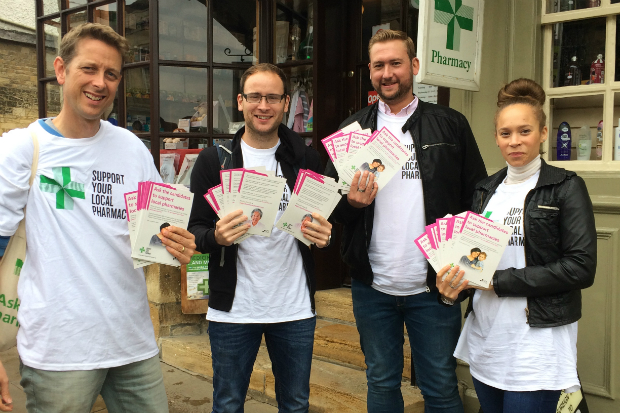 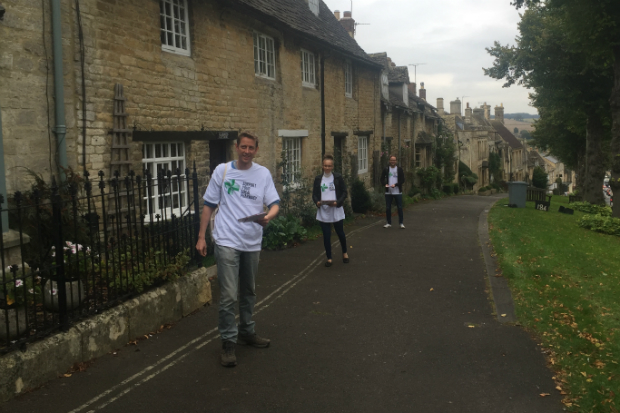 Speaking to C+D during a leaflet drop (pictured above) in Burford, Oxfordshire, Mr Fishwick said the public are aware of the NPA’s campaign efforts to fight the funding cuts and ‘Support your local pharmacy’, but “we are having to correct and clarify public understanding on the cuts announcement”.

The NPA had a “huge presence” at the party political conferences this year, and the “unprecedented” joined-up approach the pharmacy bodies exhibited this time around helps to keep the anti-cuts campaign – and ongoing support for community pharmacy – in the media, Mr Fishwick added.

“We’re in a place right now we have never been before, a place of understanding and support… but unfortunately there are still some officials driving through changes that will put community pharmacy at risk."

Mr Fishwick stressed: “We will continue to talk up the value of community pharmacy and keep the campaign in the public eye, long after the funding package has been announced."

“Wherever the public eye is, wherever the politicians and media are, that’s where we’re trying to be,” he added.

Listen to C+D's podcast recorded live from the anti-cuts campaign trail in March.

NPA petition reaches one million signatures, so what next?
03/05/2016 | 8 | News
6 Comments
Question:
What are you expecting from the government's funding "package"?

I think this subject matter is a bit mis-leading. I agree with Valentine that the general public haven't got a clue what goes on in a pharmacy and more disconcerting , probably don't care. It would be only representation or portrayal of pharmacy on T.V that would increase the publics perception.

I'm afraid pharmacy only has itself to blame. For years there's been a race to the bottom with everyone trying to outdo each other with free delivery, free services to care homes, free blister packs (as well as £5 private Rx, £5 flu jabs, 30p paracetamol, etc). All these 'free' services cost money and the PSNC should have done a better job of making the NHS pay for them. Instead everyone was happy with the status quo as there was enough money sloshing around. Now that the money is being drained it's beginning to hurt... Why not start withdrawing free (and non-contractual) services until the NHS pays for them? Of course that would mean contractors need to cooperate with each other.

I read an article in the Daily Express....http://www.express.co.uk/news/uk/719031/cutting-pharmacies-NHS-doctors-patients-billions-slashing-funds-deparment-health-A-E Very good piece. Also interesting to read the comments posted to the article. Basically says if pharmacies give free deliveries they must be "raking" it. Cuts will mean that pharmacies will have to reduce overheads and offering free deliveries to everyone who asks will have to stop.

They were and still are raking it in which is why they were offering free deliveries in shiny new vehicles emblazoned with logos. Owners and contractors are simply cutting hours and staff to maintain the profits(taxpayers money) they believe they're entitled to

Honestly, I'm surprised the public have the slightest inkling of what's going on in the world of pharmacy funding (or indeed any interest), not to mind thinking the cuts are on hold! Most of my customers have succeeded in getting through their lives without realising there is any difference between a green prescription and a white repeat form!