The 13 area managers who responded to the survey saw an average pay increase of £6,140

The average salary of superintendent pharmacists is £52,000, continuing a trend of rising around £3,000 a year, according to the C+D Salary Survey 2018. 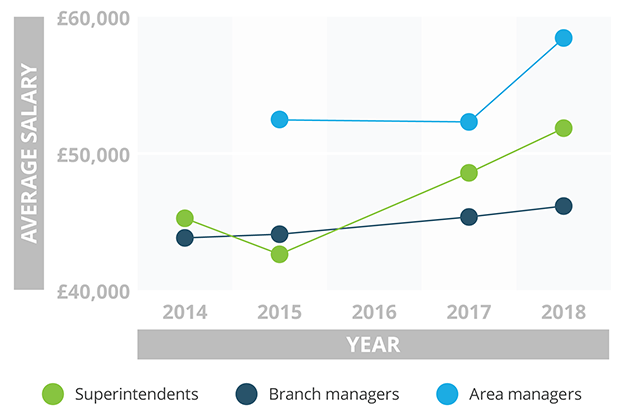 One superintendent, who earned between £45,000 and £49,999, told C+D that despite working more than 21 hours unpaid overtime a week, his pay had decreased by 6-10% between October 2017 and October 2018, even though he had received a bonus in dividend payments.

Another superintendent, who also works as a pharmacy manager and earned between £60,000 and £64,999, said their pay had not increased in 10 years. “This is the same for all staff in the company,” they claimed.

One manager who worked for an independent pharmacy said they had received a 1% pay rise over eight years and were considering leaving the sector, as “there seems to be no light at the end of the tunnel”.

A pharmacy manager who worked for a small chain said their pay had reduced by £4-per-hour compared with a decade ago, and they had “financial worries” as a result.

This marked a significant reversal of the slight decline seen over the past couple of years, when the average area manager salary dropped marginally by £178 between 2015 and 2017.

C+D Salary Survey: Gender pay gap doubles in a year
11/07/2016 | 6 | News
4 Comments
Question:
Do these salaries reflect the ones in your pharmacy?

I look forward to seeing the PSNC payrises in their annual accounts...

Interesting last year this 2016/17 accounts were published early November.... still waiting for the 2017/18

Probably still negotiating...here's an idea - if the pharmacy contract goes down by x%, why PSNC don't they decrease theirs by x%? A sort of Cameroon "We're all in it together" type scenario.//

If you're doing that much unpaid work there is something seriously wrong.