Contractors hoping their pharmacies would become designated COVID-19 vaccination sites have told C+D of the “disheartening” experience of being rejected from the service.

This included the ability to administer 1,000 vaccinations a week, which ruled out many smaller pharmacies from taking part in the national service.

However, some pharmacies that were able to meet the standards have been told by NHSE&I that they are no longer needed.

Ronak Maroo, manager of Janssen's Pharmacy in Bedford, initially applied for three of his pharmacies to become COVID-19 vaccination sites in December. The two branches in Luton were rejected by NHSE&I at the end of the month, which Mr Maroo believes is because the commissioner had other dedicated sites already in the area.

On the same day, he was informed that Janssen’s in Bedford was on the shortlist.

Explaining why he decided to apply for the LES, Mr Maroo said: “We’re at the centre of the community and we thought it would be a good thing to do to help everyone.”

However, earlier this month (January 5), in an email from NHSE&I – seen by C+D – Mr Maroo was told that “further provision at your site location will not be required”.

“The landscape is changing at pace and as more information becomes available, we are continually having to review provision,” NHSE&I added in the email.

Mr Maroo said he and his team were “really disappointed” to receive the rejection notice.

“We put a lot of time and effort into making sure everything was in place and for them to just send a casual email with that rejection, it was really disheartening,” he told C+D on Monday (January 11).

Mr Maroo claimed he and his team had been given just two days to fill out all the necessary paperwork to apply for the scheme, which included a risk assessment, annotated site layout showing planned workflow, and a list of the proposed workforce.

Had the rejection notice from NHSE&I come a day later, he said, he would have spent £7,000 on a marquee where vaccinations could take place at the back of the pharmacy.

Another pharmacy that initially applied to administer the Pfizer/BioNTech vaccine was Bloxwich Pharmacy in Walsall, as they wanted to help other healthcare professionals to reach the government’s vaccination targets, owner Navinder Matharu told C+D.

NHSE&I rejected the site as it believed the two metre social distancing of patients in place was not adequate for the fifteen minute observation period required after the Pfizer/BioNTech vaccine has been administered, Mr Matharu explained.

“I think when we found out that we didn’t get it, we were all disheartened,” he told C+D.

However, the team were “completely over the moon” to hear the following week that they had been approved to administer the Oxford/AstraZeneca vaccine, which does not require a similar wait period.

After months of “hard work” and preparation – which includes the recruitment of additional vaccinators and “front-of-house staff” to oversee the COVID-19 vaccination area, full staff training and some building work to section-off the pharmacy from the vaccination area – Bloxwich pharmacy will begin administering the Oxford/AstraZeneca vaccines from the end of the month, Mr Matharu explained. 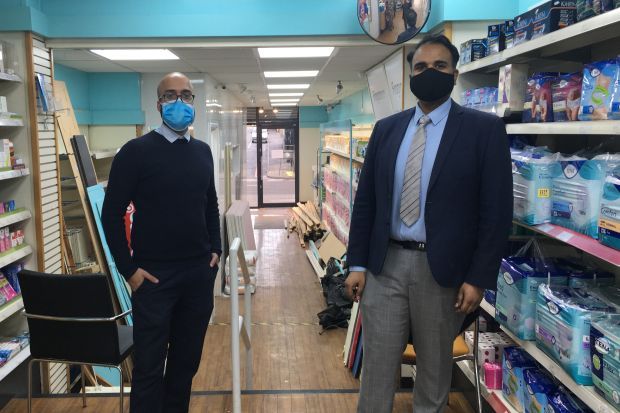 Bloxwich’s quest to become a designated pharmacy site was a collaborative effort, utilising the skills of pharmacists in other specialisms, including primary care network pharmacists Inderpreet Kaur and Umeh Ali, who had experience of working in COVID-19 vaccination sites.

Jaswinder Dhap, a hospital pharmacist and consultant who helped establish the site, said Ms Kaur and Ms Ali were able to offer advice on the pitfalls of the service and what Mr Matharu would have to consider in order to get his pharmacy signed off by NHSE&I.

This included ensuring the normal pharmacy service was not disrupted by the additional workload and having a separate entrance and exit for the vaccination service.

“Overall, we want to deliver the vaccines safely for patients and protect our staff too, so it’s probably better that we didn’t get the Pfizer [vaccine],” Mr Dhap said.

“Pressure on the supply chain”

Despite calls for more pharmacies to be involved in the national vaccination programme, their experience of readying their site has made both Mr Matharu and Mr Dhap sceptical about the prospect of the whole sector offering the service immediately.

“When you look at a service, as a community pharmacist you’d say ‘ah, you know, we can do that; we did the flu jabs’. But I think after having done all the detailed reading…there’s a lot more to think about than just jabbing someone in the arm and letting them go.”

Mr Dhap pointed out that NHSE&I had to approve every site, and couriering small batches of the vaccine “adds pressure to the supply chain”.

Smaller pharmacies would still have to find six people to vaccinate in a six-hour period when drawing up from a vial or see the vaccine go to waste, he explained.

Both agreed pre-filled syringes may help smaller pharmacies join the vaccination effort in the future.

Mr Matharu remained positive that more pharmacies would be approved for the rollout. He said: “Those pharmacies that have been able to put through a solid application in the first place and can show that they can manage the operation, I think that they would be more likely to get the Oxford/AstraZeneca vaccine.”

NHSE&I had not responded to C+D’s request for comment at the time of going to press.

Congratulations on getting approval to administer the Oxford/AstraZeneca vaccine. Can't help but wonder why pharmacists/pharmacy is always "disappointed" at any kind of rejection and never "outraged", "fuming" or any other word that shows we shouldn't be trodden all over by Government, NHS or anyone else for that matter!

Are you going to do 1000 vaccinations per weekas that was the criteria for all applications. Or have the criteria changed and if so why have designation process not been restarted ?