Jonathan Cooper, owner of Coopers Chemists in the Chancellor's constituency: “our door is open – please let us keep it that way by reversing these devastating cuts”.

Pharmacists in key ministerial constituencies have begun a week-long campaign, urging the government to cover the sector’s COVID-related costs.

Approximately 60 pharmacies across seven constituencies will be distributing leaflets and displaying posters, beginning in the chancellor Rishi Sunak’s constituency in Richmond, Yorkshire.

The National Pharmacy Association (NPA), which is coordinating the campaign, has also taken out adverts in local newspapers.

Last year, community pharmacies were given advance payments totalling £370 million by the government to cover COVID-related costs – which the Pharmaceutical Services Negotiating Committee (PSNC) estimates is now more than £400 million. However, the government is so far yet to agree to write off that debt, despite calls from the sector to do so.

Prime Minister Boris Johnson previously said at a Downing Street briefing on February 10 that he wanted pharmacies to be “reimbursed as soon as possible”, but no such commitment was made in last Wednesday’s budget. 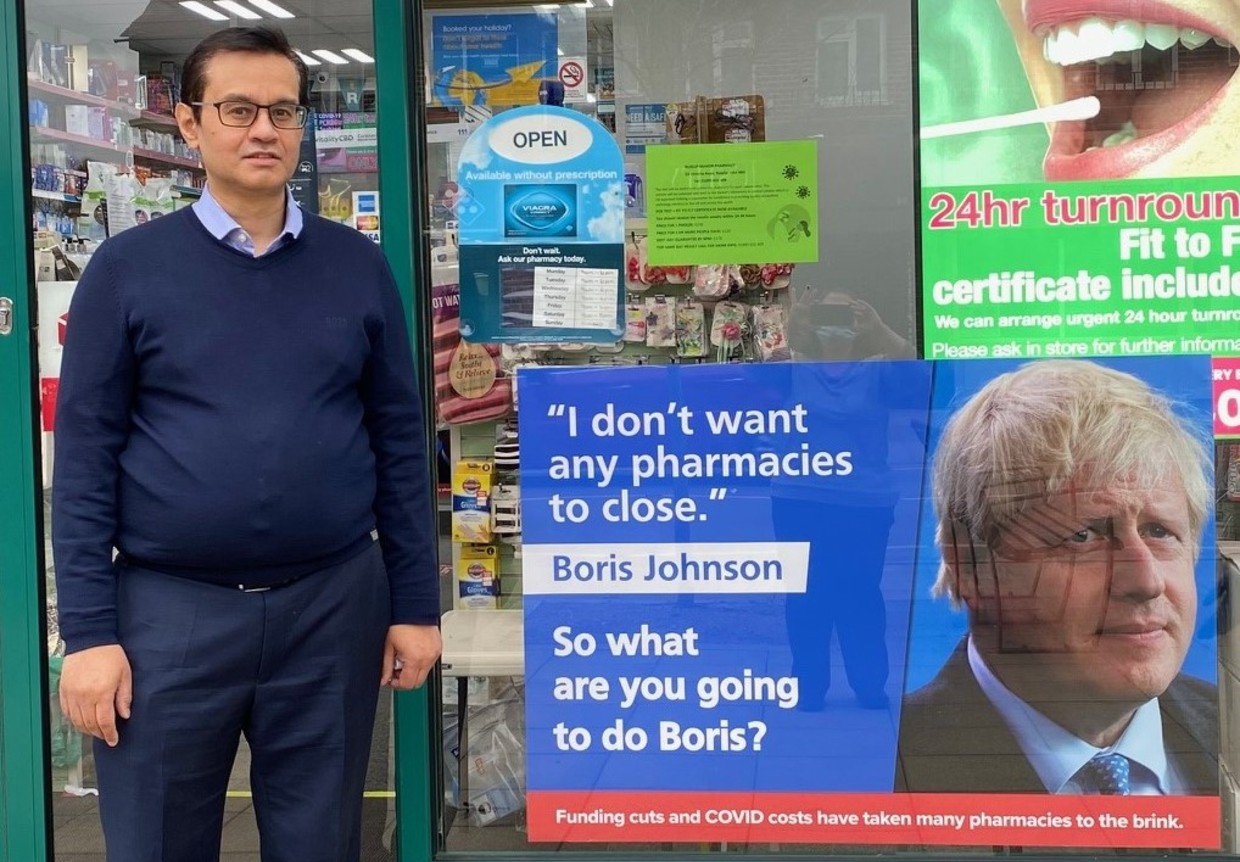 In the Prime Minister’s own constituency, one pharmacist joining the NPA’s campaign is Sanjay Doegar, superintendent at Ruislip Manor Pharmacy. He told C+D he chose to join the efforts so he could use the “leverage” of being a local pharmacy to “have an impact on him”.

“[On] the income side of things we've been squeezed enormously, while the demand side has just kind of gone sky high,” Mr Doegar added. “Clapping at a certain time of the day doesn't pay anyone's bills, sadly.”

The COVID loan had been “absolutely needed” for Ruislip Manor Pharmacy, he said, to subsidise the high cost of care during the pandemic and keep the business’s cashflow going.

Mr Johnson has been known to visit the pharmacy on occasion, and Mr Doegar described him as “a very personable character” who was “gracious” and “always very complimentary”.

These experiences had made Mr Doegar unsure of exactly why the sector’s COVID loans had not been written off, but he suspected it may be due to a disconnect between politicians and “bureaucrats”.

However, “he [Mr Johnson] could turn around and push a better future for pharmacy”, Mr Doegar suggested.

One pharmacist campaigning in the chancellor’s constituency is Jonathan Cooper, owner of Coopers Chemists said he wanted to give a message to Mr Sunak: “Our door is open – please let us keep it that way by reversing these devastating cuts”.

“My pharmacy and many others like it have continued to see patients in the community while other parts of the health system could not offer this vital service,” Mr Cooper added. “As a result, we have incurred massive extra costs and the government needs to cover this as promised.”

A spokesperson for the NPA told C+D that it was “too soon to say” what the reaction from locals to the campaign is, and added that they had yet to receive a response from the chancellor or his constituency office.

Areas that the NPA will be campaigning in are:

NPA chief Mark Lyonette commented that the government “continues to drag its feet over offering proper financial assistance for pharmacies, so this latest campaign initiative brings the matter close to home for the decision makers, in their own constituencies”.

Send your annual P & L accounts and balance sheet in support of your claim, and you might convince no10 & 11 to review their deision on writing off the loan.

In passing also mention that the grants and rates relief, plus extra payment over the Easter and May Bank holidays were wholly inadquate!!

Good! but it still doesnt make as much difference as a 1 minute slot on breakfast tv, and being polite will get them nowhere