Seema Kennedy: Government’s ambition is clearly in line with the vision C+D has outlined

Pharmacy minister Seema Kennedy has told C+D she hopes to announce details of an “expanded role” for the sector this year.

In a letter to C+D, sent yesterday (June 18), Ms Kennedy said she is “committed to delivering an expanded role for community pharmacy”.

“I hope to be able to announce more detail about how we will work with contractors to implement that later this year,” she wrote.

Ms Kennedy’s remarks are the most substantial comments she has made about her attitude towards community pharmacy’s role in the NHS since she was appointed parliamentary under-secretary for public health and primary care in April.

The minister was responding to a letter from C+D editor James Waldron, sent two weeks after her appointment, in which he welcomed Ms Kennedy to her new role. He said he hoped “you will be able to steer the funding negotiations to [an] outcome…empowering pharmacies to deliver minor ailments advice to patients who would otherwise attend over-burdened GP practices”.

Mr Waldron also asked Ms Kennedy to live up to a promise her predecessor, Steve Brine, made to C+D in 2017 – that pharmacies would receive “fair and sustainable funding”.

Government is “in line with C+D’s vision”

Ms Kennedy said: “The government’s ambition to integrate community pharmacy better into the health service, as set out in the NHS long-term plan and the recent GP contract announcement, is clearly in line with the vision C+D has outlined.”

“We all recognise community pharmacy as a vital part of our health and care system, providing a wide range of services and support to people in their local communities,” she continued.

“It is important that we build on and make the most of the expertise and accessibility of pharmacy teams at the heart of communities.”

Ms Kennedy added that she has “a fascinating portfolio” and is “delighted to have already met so many dedicated health professionals”. 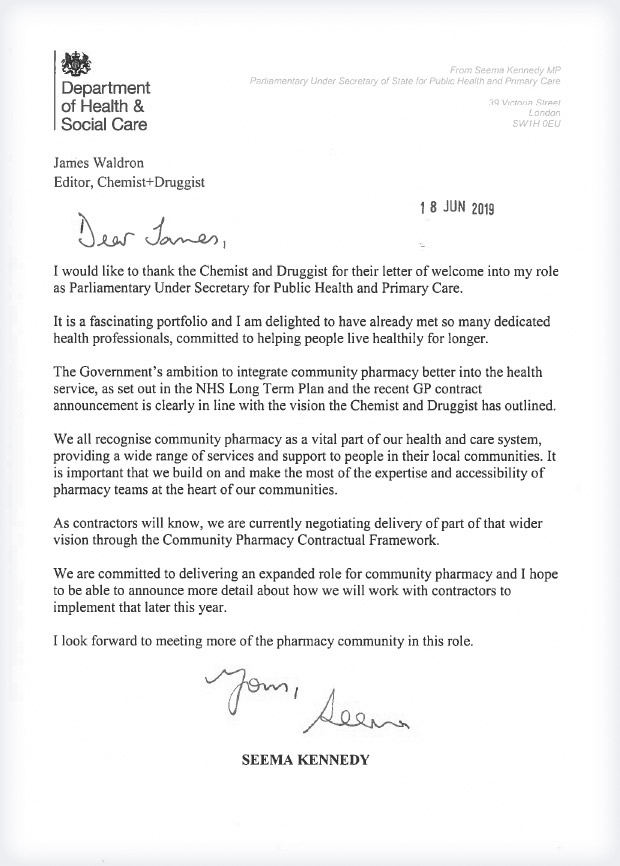 Read why Mr Waldron is optimistic about Ms Kennedy's comments.

According to the Cambridge dictionary the word hope means:

"to want something to happen or to be true, and usually have a good reason to think that it might"

Unfortunately folks, this sector has been strung along by dubious politicians for too long. Therefore I have little expectation they will deliver let's not forget the 2005/2006 pharmacy contract was altered to introduce clinical services to replace the grunt work of dispensing. So really this should have happened 15 years ago it kind of sets the tone of governments attitude towards pharmacy.

Currently, pharmacy is probably one of the most cost-effective services why rock the boat and pay us when we gullibly do this all for free?

But then, why should they (the state & doh) change?

They have already got us where they want- see postings from employees of multiples, routinely blaming their employers, rather than targetting DOH/NHS for their ire!

Nothing will come of it.

No pharmacist, locum, employee, contractor should be under the illusion that state/ doh is benign

'We all recognise community pharmacy as a vital part of our health care system' - How does this equate with unprecedented levels of closures and appalling remuneration ???

Les me guess about this 'expanded role' ....All the stuff GP practices want to pass on or refuse to do for peanuts and no actual new remuneration whatsoever for pharmacy.Oh I know....let's keep the global sum the same and pay Pharmacy less for the 'Sterling work' they are currently underpaid to do....Be on your guard PSNC....For all of our sakes ...New government soon with any luck and with some responsive voting.

"""an expanded role for community pharmacy"""

Hope these roles come with more funding to do justice to these roles.