Ian Strachan: Pharmacy2U threatened to sue and report me to the GPhC

Ian Strachan: I felt it was important the NPA stand up for its members against Pharmacy2U

The former chair of the NPA has described how Pharmacy2U threatened to sue him for his part in sending out posters about the online pharmacy's conduct.

Last Friday (December 14), the High Court dismissed Pharmacy2U’s attempt to obtain the names, addresses and contact details of all National Pharmacy Association (NPA) members. The company alleged that a NPA leaflet and poster (see below), distributed to members from November 2017 onwards, had damaged the company’s reputation. 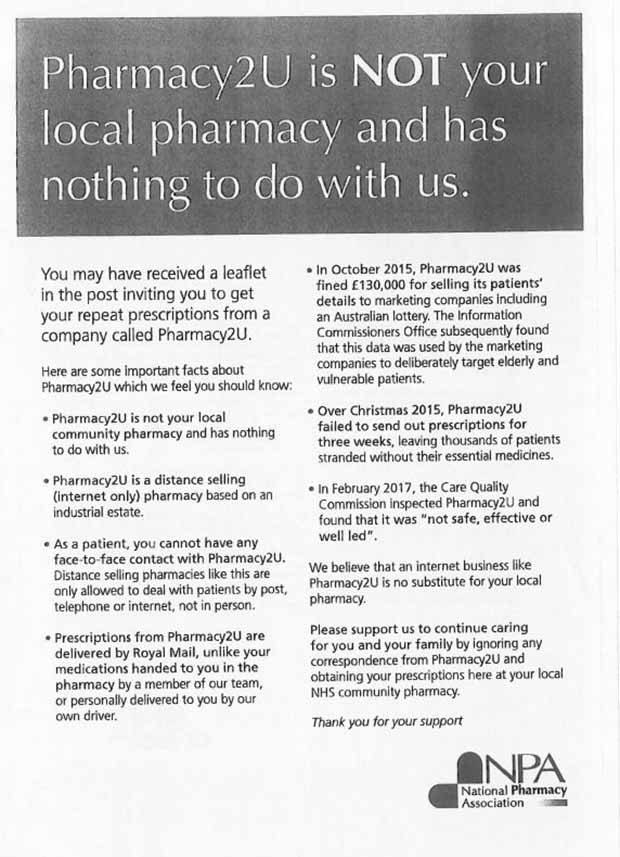 Ian Strachan, who was NPA chair when the posters were sent out, told C+D that the online pharmacy “wrote to me just before Christmas [2017], threatening [to] refer me to the General Pharmaceutical Council and sue for defamation”.

“I believe they wrote to me personally, rather than the NPA, because they thought they would have better luck threatening an individual, rather than an organisation.”

Mr Strachan told C+D it had been “my decision to issue” the materials. “I knew these were all absolutely true statements, and I felt strongly about the need to inform patients and to defend our members against Pharmacy2U’s tactics.”

He instructed the NPA’s solicitors to “fight Pharmacy2U every step of the way”, he told C+D. “Within weeks, Pharmacy2U had to accept everything in the notice was true and they couldn’t sue for defamation.”

Mr Strachan’s version of events matches the High Court judgment. It describes how Pharmacy2U initially alleged the statements in the poster were untrue and “threatened claims for defamation and malicious falsehood”, before withdrawing these claims after receiving a response from the NPA’s solicitors.

Pharmacy2U then switched its strategy to trying to obtain contact details of every NPA member, according to the court documents, with the aim of contacting individual pharmacies to allege that displaying the poster made the pharmacies “a wrongdoer”.

“Harassing pharmacies would have been awful”

Commenting on the company’s failed strategy, Mr Strachan said: “I didn’t want to see any individual NPA members being harassed by Pharmacy2U – that would have been awful.”

“My view was that it was certainly worth fighting to protect members,” he said. “We didn’t want members to be approached by Pharmacy2U.

“I acted as a witness for the NPA in defending [against] Pharmacy2U’s claim. Although I am no longer NPA chairman, I felt I was the right person to do that.”

This led Mr Strachan to work with the NPA's lawyers to draft a 53-page witness statement, he explained.

“I’m glad the court also recognised that Pharmacy2U wanted to threaten and intimidate individual pharmacists,” Mr Strachan added, referring to the High Court judge’s comments about the “serious risk” that the company would have “pick[ed] off” pharmacies if it had been given their contact details.

Pharmacy2U has not responded to C+D's repeated requests for comment.

Well done - someone has to stand up against  P2U.

They have just sent leaflets out to this area yet again so no doubt some people will be mislead yet again.  I was shocked to notice that by signing up to them you also agree to them accessing your Summary Care Record

I'll bet Ian Strachan was shaking in his boots. Being threatened with being sued... defenses against being sued for defamation - 1) The Statement is True

Oh dear... looks like Pharmacy2u falls at the first hurdle.

Ian, well done. Once again you showed leadership and drove this on behalf of community pharmacy. This sector needs strong leaders like you.

The GPhC will say something along the lines of "sorry our hands are tied". Probably with rope from the Harrods kink dept. Using money from registration fees.

Dear Ian, I once heard you speak at an LPC event when you were the chairman of the NPA and you energised us. You brought life and leadership back to the NPA and you are missed. Why are you not carrying on as chairman? Thank you for all your personal efforts supporting pharmacy.

And once again absolute silence from the GPhC!

P2U is only doing all this because they really want to be NPA members.....c'mon NPA please let them join!

Congratulations Ian - and to the NPA for standing up against the tactics that have confused thousands of patients in the past. Perhaps GPhC would ask them not to repeat the mass-mailings in the same manner?

Dont hold your breath. GPHC  frit of P2U. Look at what P2U get away with without sanction.

Busy at the Xmas jolly up. Call back in January.