Pregabalin and gabapentin errors continued ahead of reclassification

Leyla Hannbeck: Reclassification of pregabalin and gabapentin could lead to fewer prescriptions

The reclassification of pregabalin and gabapentin as controlled drugs should reduce 'look-alike, sound-alike' errors, the NPA's medication safety officer has said.

Gabapentin and pregabalin continue to be among the most commonly confused medicines in pharmacies, Leyla Hannbeck's revealed in her latest MSO report last week (April 25).

However, she expects to see a reduction in the number of errors involving these drugs following their reclassification as class C controlled substances from last month.

“The reclassification will deter prescribers [from] issuing prescriptions due to more stringent regulations, hence less prescriptions may potentially be supplied,” she told C+D yesterday (April 30).

“Similarly, all gabapentin and pregabalin prescriptions will be subject to prescription writing requirements and prescriptions would be valid for 28 days, which will allow for more vigorous checks to be made, leading to less dispensing errors,” Ms Hannbeck explained.

'Look-alike, sound-alike' errors accounted for 29% of all patient safety incidents reported to the National Pharmacy Association (NPA) in the first three months of 2019, she added in the report. 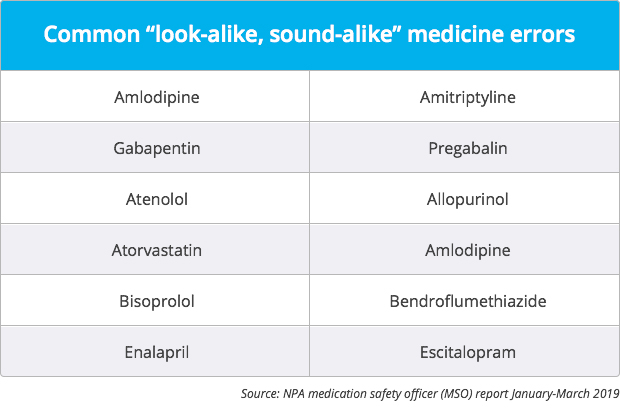 “Wrong formulations” accounted for 11% of all patient safety incidents, with the majority of reports involving “inhaler preparations being dispensed incorrectly in place of dry powder, breath actuated and/or nasal spray, and vice versa”, according to the report.

Ms Hannbeck advised pharmacists and pharmacy staff to use the NPA’s inhaler identification checker to ensure the right device is dispensed.

While 93% of incidents originated from the pharmacy, there was an increase in the number of reports of prescribing errors, accounting for 5% of all patient safety incidents, Ms Hannbeck said.

“Such errors have historically been underreported,” Ms Hannbeck said, but show how “clinical checks made by pharmacists and their vigilance is preventing harm to patients”.

In one incident of “wrong dose prescribing”, a prescription originally for 18mg and 36mg Delmosart prolonged-release tablets, at a dosage instruction of once daily, was instead written as: “Take ONE tablet TWICE a day” on the dispensing label. This led the patient to experience hallucinations and being referred to hospital for further assessment, Ms Hannbeck explained.

The majority of all incident reports – 53% – continue to involve no harm to the patient, while 34% were reported as “near misses”.

Although the number of errors causing “moderate harm” to patients fell from 3% to 2% compared with the final three months of 2018, “all the incidents involved giving the wrong drug to patients who were then hospitalised”, Ms Hannbeck added.

In one incident, a patient spent four weeks on amisulpride 200mg tablets instead of amiodarone 200mg tablets, and eventually ended up in hospital with arrhythmia.

Read why medicines shortages could be contributing to error reports in pharmacies.

National rollout of schedule 2 and 3 controlled drugs on EPS begins
05/03/2019 | 7 | News
9 Comments
Question:
Do you recognise any of these medicine errors?

""""a patient’s dog was taken to the vet after eating her week’s dose of prednisolone 5mg tablets,"""""

A very smart dog indeed. Opened the bag, checked the dose was correct on the label, then opened the FMD compliant pack and finally popped the pills with ease and consumed the meds. Much better than some patients complaining how hard it is to pop the pills out of the blisters ;-))

It is worrying that people still deliver medicines without signatures. Even looking at it on a social level that might be the only opportunity to see a patient; we effectively deny ourselves a safeguarding opportunity.

Not to mention the inherent risk of passing on dangerous goods where they could be stolen by flatmates/eaten by a dog or child/damaged from the drop, all of which are scenarios I have encountered before.

The DoH are perfectly happy for online phamacies to do it, so it shows how much they think your interaction is worth. Then again they do get the entire delivery service for free from community pharmacies.

Not that I would personally want to deliver meds with no signatures.

No, you'll find errors happen because there is too much pressure on the pharmacist.

Reduce pressure and the errors will reduce

It's even an argument for the pushing of using robotic dispensing; fewer humans involved in the process; less chance of human error. It's undeniable logic.

A human still has to load the machine, so the risk of error still exist. Then taking into account the machine breaking, wrongly loaded drug slots and machine unable to physically count tablets in box, just creates a whole new world of errors that don’t exist. Reducing risk is priority. A dispenser with a broken arm can still think and function, a machine can’t.

Amlodipine/Amitriptyline is the only one in that table I'd think of as "common", based on personal experience.

Shoe-in for the understatement of the year award, and we're only a third of the way through it.

I have to agree; cannot say I have encountered those in the last six months across the country either, based on personal experience.