70% of readers back Boots sore throat service… if funded

Just 3% of pharmacists would offer the scheme regardless of cost

Seventy per cent of pharmacists would offer a sore throat service if it had appropriate financial support, a C+D poll has revealed.

NHS England announced last month it is backing a ‘test and treat’ sore throat service in pharmacies – first piloted by Boots in 2014 – to relieve pressure on the NHS, free-up GP appointments and tackle antibiotic resistance.

During the pilot, patients paid £7.50 for a throat swab test and a further £10 if antibiotics were supplied. However, NHS England told C+D last month that “full plans” on how the scheme may work on a national scale – including how it will be funded – “have not been developed”.

The scheme came under fire from the Pharmaceutical Services Negotiating Committee (PSNC) at the time as “no central funding is being made available to commission [the] service”, a reservation that appears to be held by 70% of C+D readers.

Out of 141 respondents to a poll, conducted on the C+D website between November 25 and December 13, 98 said they would considering offering the service, “but only if it is properly funded”.

More than a quarter (27%) would not offer the service – two-thirds of whom said it would increase staff pressure, while the remainder said it would “not benefit patients”.

Just 3% of pharmacists said they would provide the scheme regardless of the cost, because “it would be a good addition to [their] current service offering”. 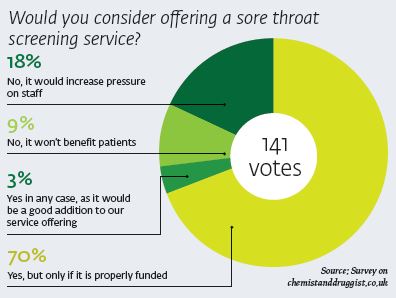 Clinical effectiveness must be shown

Kent contractor Amish Patel told C+D he would welcome the service if it was appropriately funded and managed, and was shown to be “clinically effective”.

“Sore throats are but one condition. A wide [ranging] minor ailments scheme could deal with so much more,” Mr Hewitson said last week.

For this scheme and similar services to work, “the NHS needs patients to change their behaviour”, he added.

Boots still deciding on fees for sore throat scheme
16/11/2016 | 24 | News
4 Comments
Question:
Would you offer a sore throat service in your pharmacy?

I still can't see how this will alleviate some of the pressure on GPs if the patient has to pay (nearly said "cough up") £17.50 when, by creating a bit of a fuss with their GP, they will get it for, at most, £8.40 - patients still view healthcare as free and that change in attitude will take some time

And of those pharmacists who constitute the 70%, how many can present a valid clinical basis for this service and provide evidence for its cost-effectiveness? Is it not time that the pharmacy degree is moved to the humanities department and drop the pretence that the scientific method is being taught as the best system for discovering what is true?

The service requires patients to pay £17.50 for test and treatment. Therefore number of patients who will do that is limited. So perhaps a simple private PGD would be better unless NHS is willing to fund?