“I’m pleased to say we have the support of those chief pharmaceutical officers,” he said.

Mr Kopelman told C+D at the conference that pharmacists at the beginning of their careers are “given a lot of responsibility, and they don't feel that they have the appropriate supervision and oversight that they would like”.

“What they want to see is much greater clarity around their potential career framework and the pathways to achieving their ambitions, whether that be in hospital, community or general practice,” he continued.

Addressing delegates, Mr Kopelman said: “Every newly-qualified pharmacist should be required to [do] a foundation programme.”

“I realise that may be controversial, but if you're going to have safe and effective practice longer-term you need to have that structured training right at the outset of the career.”

Pilot could begin in September 2019

The initiative would involve a two-year foundation programme with two annual reviews, which could inform a pharmacist’s revalidation entries, Mr Kopelman explained.

The earliest the programme could be rolled out to pilot sites would be September 2019, he added.

View one of Mr Kopelman's conference slides below: 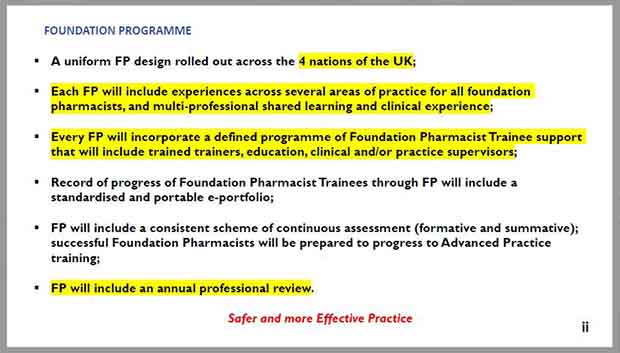 To monitor it, the RPS has proposed a postgraduate pharmacy training board involving itself, the General Pharmaceutical Council (GPhC), “NHS pharmacy education and training structures” and “employers”, Mr Kopelman said.

“It is important for the large pharmacies – Boots and Lloydspharmacy [for example] – to be part of the process,” he added. “The RPS will need to work with the small independent [pharmacy] community to see how we can engage and involve them.”

At the conference, GPhC chief executive Duncan Rudkin said he had “lost count of the number of times relatively newly-qualified pharmacists have told me how disillusioned they have become very quickly following entry into community pharmacy practice”.

The whole suggestion shows how out of touch the RPS Faculty is with real life I am very sorry to say. It appears to be a desperate attempt to justify the faculty's own existence by putting another layer of bureaucracy onto newly qualified pharmacists. We still need a fully functioning professional body that understands that the vast majority of community pharmacists are employees and represents us properly.

To stop newly qualified pharmacists from being disillusioned be honest with them from the bigening about what to expect once they qualify. Unfortunately universitiea are businesses and they just need the money. Multiples are just as much to blame with their targets that treat the nhs like cash cow, bullying pharmacists into doing unnecessary services and blacklisting locums that dare to speak up. Now that want to bring in tech and remote supervision. I'm sorry but it doesn't take a genius to figure out why pharmacists are disillusioned. I say pharmacists because it's not just newly qualified that are disillusioned. RPS will lose faith of its members and pharmacists in general if they don't deal with the real issues.

Today a sticky label is typically put on a box containing a PIL and a record is made on the PMR. That’s progress in my 35 years that’s community pharmacy. Still to agree whether an original pack contains 28 or 30 tablets. And the newly qualified feel disillusioned??? What have PSNC and RPS been doing for the last 35 years that has truly enhanced the reputation of community Pharmacy? I feel for the newly qualified, they ought to be demanding a refund on their fees, they have been sold a bum deal. Froth like this from the RPS will change nowt

It's not the isolation its pigeons coming home to roost that the lies told in social media and chemist and druggist are not true and they realise what life in pharmacy is really like!

Well this is bound to prevent "newly-qualified pharmacists being disillusioned very quickly following entry into community pharmacy practice". Not