RPS aims for gender balance ‘at all levels’ by 2020

The Royal Pharmaceutical Society (RPS) has set out bold plans to address gender inequality in pharmacy, including a pledge to have an equal number of men and women on its board.

Achieving “gender equality” at the RPS by 2020 will be “a key strategic goal”, according to a draft charter – which the organisation will consult on before it is agreed – presented by English board members Nadia Bukhari and Mahendra Patel on Wednesday (June 27).

At the society’s Women in Leadership event, the RPS proposed to measure its progress in equality in its future annual reports.

The society plans to “have strong and consistent visibility of women in pharmacy”, ensuring “shortlists for decision-making at senior levels” include them, it said in its draft charter.

The charter also pledges to have “gender-balanced interview panels”, as well as “flexible working arrangements” for male and female staff with children.

The RPS later told C+D that the draft is "very much in its infancy and continues to be work in progress. We will continue to explore this with others and encourage input and further feedback". 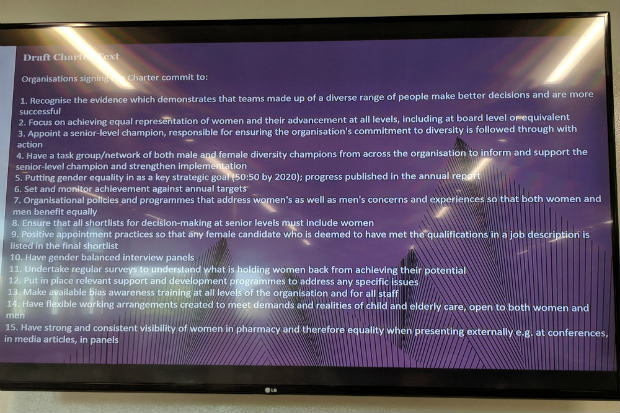 RPS deputy chief scientist Claire Thompson announced that the RPS will also launch two new awards to recognise the contribution of women in the profession.

The RPS will reveal details of the awards – for women in pharmacy and pharmaceutical sciences – at the International Pharmaceutical Federation (FIP) congress in Glasgow in September, and will announce the winners at an event on International Women’s Day in March.

Deborah Evans, co-founder the Women in Leadership working group and managing director of Pharmacy Complete, told C+D: “[Now] more than ever, having diversity at senior levels [of the profession] is the right thing for pharmacy.

“We need both men and women to make this change, because it is the right thing to do.”

C+D hosted a roundtable discussion on achieving gender equality in pharmacy in April and invited five female leaders from across the sector to join the debate. Listen to the full debate in C+D's podcast, and read highlights from the event here.

Great to see that members' fees are being wisely spent. In this already female-dominated profession, community pharmacy is currently in a perilous position, fighting to stay afloat to make ends meet.

But, hey, if there are a few more females spewing the same rhetoric at the top of the RPS, that'll make the world a better place won't it?? Perhaps England will win the World Cup! Then it'll all be worth it.

What about those who are gender neutral? Or what about gender fluid? Glad to see where the priorities lie, I don't care who's on the board - decriminalise bleeding dispensing errors and reduce workplace pressure by the multiples...get your priorities right

You may have noticed that one-eyed people from Mars who are paraplegic earn less too. Should we be favouring them when interviewing? What is the world coming to?

Surely you should employ the best person for the job. If that is a blind cat, a sex offender or someone who thinks the moon is made out of cheese, what difference does it make? You are employing them because of their ability to complete the job at hand, not because of their sex or any other attribute.

I just noticed that we don't have anyone from Eritrea on our team, does that mean I must favour them even though they probably wouldn't be able to answer the phone in English?

The world has gone mad.

Too many idiots with far too much time on their hands.

Oh, sorry, I just read that we are talking about the RPS. QED.

So only 39%  male on register and you want to know how to further support females?  A 5% pay difference between men and women?  Show us who is discriminating?  The gender wage gap is non existent once factors such as part-time work,choosing lower responsibility etc are taken into consideration. These dog-whistle attempts to cause division are becoming more and more obvious to many. The insinuation that women are not appointed to top posts due to bias and sexism is so dated and grossly unfair to appointment committees. The push for diversity at all costs is creating groups with special privileges. Who of colour, LGBT, or preferred “oppressed”gender will ever know they got the appointment by merit. This undermines trust and respect in institutions- and competency. Of course with my white privileged how could I ever understand?  I had one set of grandparents born in workhouses and my paternal grandfather was in indentured servitude. Both grandfathers survived rough war experiences and one grandmother was bombed and permanently deafened.  The effects of this still ripple in my family. Is a rich middle class public schoolgirl less advantaged than a poor boy on a rough council estate. The classing of people by their identity is almost the definition of racism and people should be very wary of the constant slow march of such identity politics.

The problem with the company I mainly work for, having looked at the stats they published is the underrepresentation of men at the lower levels (HCA, DA, DT, ACT), which makes it look like there is a pay gap. What needs to happen is men should be encouraged into these roles and the pay gap will narrow!