Community pharmacies “have to grab the future” by investing in automation, the pharmacy minister has told C+D.

Speaking to C+D at the opening of wholesaler Sigma Pharmaceutical’s new automated warehouse in Watford, Steve Brine said community pharmacies “have got to embrace technology and embrace the future, because that is what serves patients better”.

“You can see some great examples of community pharmacies that are grabbing the future, and they have all got to do that,” he added.

The family-run Sigma Pharmaceuticals is “a great example of one end of the supply chain” adopting automation, Mr Brine told C+D at the ribbon-cutting ceremony last week (March 22).

However, he also stressed the importance of replicating these technological advances at “the front end of the supply chain” as well. 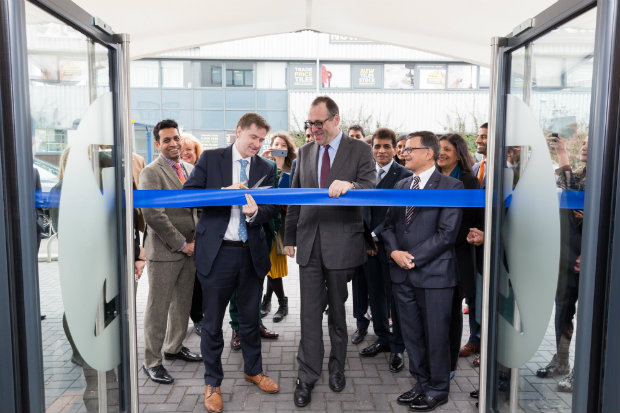 C+D joined Mr Brine on a tour of the warehouse, in which he experienced the wholesaler’s automated process of managing and picking orders from stock, and witnessed customer orders circulating on a conveyor system.

The site is the latest opening from Sigma Pharmaceuticals, which employs more than 400 members of staff and serves more than 3,000 pharmacies across the UK and Europe.

“Space was at a premium and – despite their best efforts – our staff found it increasingly difficult to work efficiently in what became a cramped environment,” the wholesaler said in its promotional materials.

Executive director Paras Shah told C+D that founding directors Bharat, Manish and Kamal Shah took a little convincing on the idea of an automated warehouse, and saw “13 or 14” prototypes of the system before they settled on the bespoke facility in Watford.

“Because we’re able to reduce the time pressure on people with the automated system, we’ve had less human errors and less returns,” he said.

The new facility has the capacity to operate at the level of the busiest days of the year – December 23 and 27 – every day for five years, Mr Shah added. 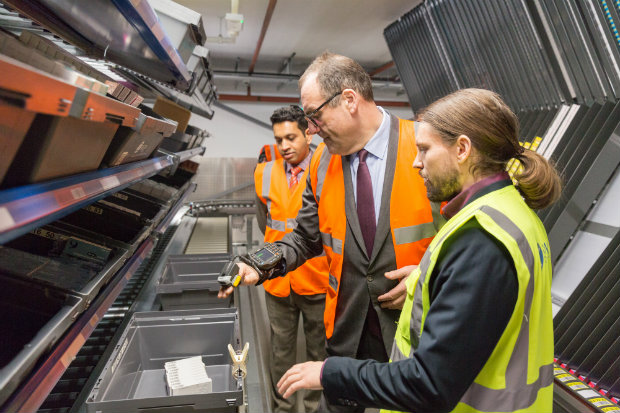 It's a poor reflection on the pharmacy bodies on how the pharmacy minister thinks , the cost of automation would be possible if funded by the government however no chance of that.Wish if that what they want then just get on with it rather than death by thousand cuts and prolong the torture.Does he not know of all the other services provided Numsas over the Easter will help hundred of the numpties who do not realise that doctors are not open over Easter.

direct delivery is a great idea. patient is in the loo, knock at the door. patient carries on with what they were doing. goes downstairs to the door and finds a note saying please collect parcel from the sorting office. no cardiac drugs or warfarin  and cannot get to the sorting office. has an event and lands up in hospital or heaven. there we have the future of pharmacy .

cannot go to the local pharmacy as that has gone

Advantage to government no pension to pay ,no pharmacy to pay.

Disadvantage increase in hospital admissions to pay for.

Would make a lovely episode for the simpons.....or maybe pharmptons

The hub and spoke model would solve the problems you describe. Most of the dispensing workload is predictable and could be automated and outsourced. Instead of boxes of stock arriving from wholesalers, complete prescriptions are delivered. Community pharmacies can then manage the next step. Of course there will be cost savings which the government will want a share of, and this will impact on staff levels, but you won't need as many staff because most of the work is done elsewhere. I think there is potential for this model to sustain the network and level of service if it is strategically managed. It's a big 'if' though!

What are we to make of "Automation is the future for the sector"?

1. Ministers see us a pure supply function. EPS & bag in the post.

2. The neighbourhood pharmacy is doomed.

3. They want a no-frills pharmacy service and reductions in the a single activity fee for years to come.

Couldn’t agree more Barry. The government doesn’t value us. If you’re a contractor Barry, it might be worth calling it a day. Or if you’re brave enough, invest heavily in this ‘wonderful automation process’ we keep hearing of, at the front end of this chain...

Some of us are doing just that, but the legislation doesn’t make it any easier for us, we are implementing a small scale hub and spoke across two sites, as it’s not a feasible investment for one site.  However we have to get consent signed from every patient at the spoke site to dispense their medication at the hub site, and to invent new ways of timeously gettingbthe medication record onto the spoke site PMR although it will now be claimed at the hub.

We were promised legislation change long ago for hub and spoke and it appears to have taken a sideline, despite it still being what our paymaster want to see from us.  The system is not designed for us to easily be able to do things in new ways, in fact it works against those trying to innovate.

If he thinks that is worth investing in a robot in anything other than the very biggest shops then he is an idiot. Its much more cost effective to employ an extra person. An extra person pay for themselves as they work, a robot is a huge upfront cost at a time when no one has any excess profitt!

Yes. I believe this Stevie boy walked into Sigma's warehouse and was overwhelmed and without serious consideration, this boy guesses this idea could be done at the local Boots/Lloyds. Some of the commentators here are also guessing the same. No surprise he is a conservative- cut funding..... Who cares.... The rich won't suffer. I wonder what Corbyn would have to say about this matter. Stevie boy needs to visit and work in a range of community pharmacies to fully understand what pharmacy is. I think there is this generational factor- some of the smartphone generation may find direct delivery from wholesaler to door or an Amazon post box appealing. But this is a very small %. However they will also age and need a bin liner full of medicines, that's when this sort of automation COULD take off.

I think the general idea is that there won't be any "middle range" pharmacies dispensing around 5000-10,000 items. So 90% of the work would be done by a hub and the rest that can't would be done in tiny dispensaries employing 2, maximum 3 people.

This wouldn't benefit patients in any way, but the government will see it as a way of saving money.

I don't agree with this direction, but I can see why it appeals to government officials. They see most of the work a dispensary does as a simple supply function, which I suppose is the case sometimes.

Some tiny dispensaries are already run by only two people, dispensing in excess of 5000 items..... And it's like a jungle!

So what's the difference? I suppose you could do away with the pharmacist and save a bit at the "spokes" in future...

I am sure Mr. Brine did not consult the Works & Pensions secretary on the job losses (un-employment) and subsequent increase in the doles !!! How about we have an AUTOMATED parliament that can run without any brain fade??? Thought not!!!

Many pharmacists feel that wholesalers are playing the generics system to make money, at the expense of patients and pharmacies.  This story does nothing to change that feeling.  Why would I invest in a robot right now, when I have no idea of whether I will get iny ROI?

And yet they can have a direct debit procedure....?

Why not just open a pharmacy in their warehouse and dispense straight from there - they have the drugs and the drivers!!! That would really bring down cost - automation at 6000 items or below is not worth it - welcome to the future!!!

Instead of manufacturer's direct to pharmacy DTP you could have wholesaler direct to patient. Its not a crazy idea. keep quiet about such ideas! It would be the 'last straw' as far as community pharmacy.