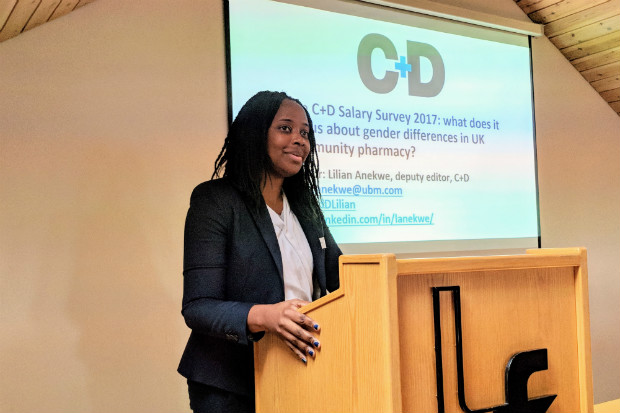 In recent weeks, I’ve been on the road at community pharmacy conferences and meetings, hearing about the experiences of women pharmacists in the UK and further afield.

Earlier this month I attended the International Pharmaceutical Federation (FIP) Congress in Glasgow, including a ‘women in pharmacy’ forum hosted by two women pharmacists who have risen to the very top of the profession – Dr Catherine Duggan and Dr Carmen Peña. Dr Duggan is the former director of professional development and support at the Royal Pharmaceutical Society, and is now CEO of FIP, while Dr Peña is FIP president.

In both cases they are the first woman to hold the role, and so it was pleasing to see this international pharmacy organisation make good on what I learned was one of its stated development goals, to address equality in gender and diversity in pharmacy leadership – which Dr Duggan described as “a global problem”.

This was illustrated by Jim Campbell, director of health workforce at the World Health Organisation, who told FIP delegates the gender pay gap in global pharmacy is above average – at more than 20%, compared to 15% in some other health workforces.

Yet figures from an FIP report estimate the global pharmacy workforce will grow by 40% – resulting in a 72% female workforce – by 2030.

These figures are based on a total headcount, and do not consider full-time versus part-time working, which the report acknowledged “is an important distinction in order to understand gender equity”. And which is why the C+D Salary Survey 2018 – which launches this autumn – is so important.

An unrivalled snapshot of the sector

In April, C+D’s analysis of data from its 2017 Salary Survey suggested that an equal pay gap exists in the sector, even when comparing men and women doing the same, full-time role. The survey revealed that the average male pharmacist's pay is £2,000, or 5%, more than a female in same role – and community pharmacists offered their views on the possible explanations.

There were 1,750 responses to the C+D Salary Survey in 2017; a small percentage of pharmacists working in the UK. But when I attended another pharmacy event – the European Women Pharmacists Meeting in Reykjavik, Iceland, the week after the FIP congress – I realised that in this respect at least, community pharmacists in the UK are somewhat better served than their colleagues across Europe.

At the meeting, I presented C+D’s data from the 2017 Salary Survey – in particular, the differences in responses from men and women about their pay, and issues such as parental leave and career development.

After the presentation, I was approached by the heads of community pharmacy organisations in Germany, Austria, and Holland, who mentioned the lack of a similar salary survey in their countries. One pharmacist remarked they “don’t have a clue about what pharmacists are paid” in their sector.

Ulrike Mayer, president of Employed Community Pharmacists in Europe, told me about its plan for a survey on working time and salaries of community pharmacists. But she admitted that, even across the continent, they have yet to achieve a sample size anywhere near that of the C+D Salary Survey.

So, ahead of the launch of our 2018 survey, I urge you to tell us what issues we should be asking pharmacists and their staff about this year. As well as pay and working conditions, we will also be exploring the biggest issues affecting the sector in the last 12 months, such as the EU’s forthcoming medicines scanning law, and CPD revalidation. But what are we missing?

At the FIP Congress, Dr Duggan told delegates that to tackle big issues like gender equity in the sector “we need to be brave and face up to them”. Gauging the size of the problems facing pharmacy, by taking part in the biggest survey of its kind, will be a good place to start.