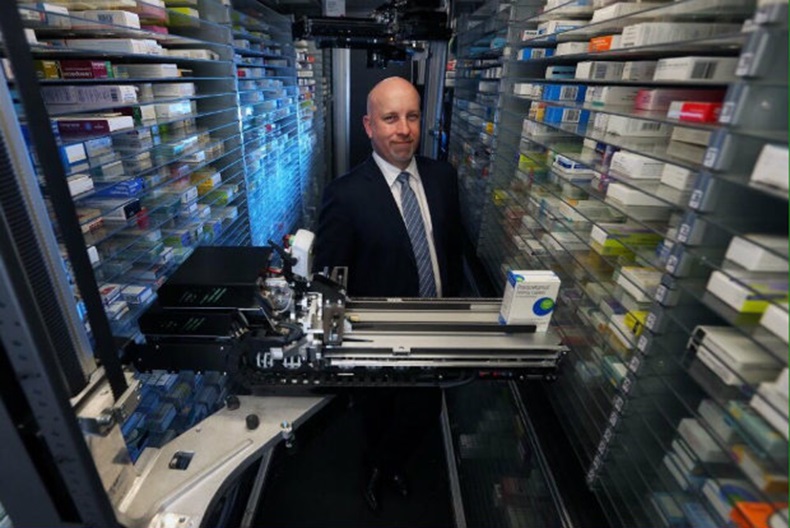 How did technology lead Mayberry Pharmacy to be crowned Independent Pharmacy of the Year?

In an increasingly strained financial landscape, it’s difficult for pharmacies to get by – let alone invest money to innovate.

But the Mayberry Pharmacy Group, which has seven branches across South Wales, has adopted a modern, patient-focussed way of working, underpinned by an automated dispensing process that allows each of the company’s premises to focus on providing clinical services, resulting in benefits for patients and staff alike.

This, and the Mayberry Group’s work with local healthcare professionals, wowed the judges for 2016’s C+D Awards, and secured the prize for Independent Pharmacy of the Year.

Managing director Paul Mayberry told C+D that bagging the night’s “top award” was a triumph, when he gave C+D his insights into how his teams achieve excellence every day.

The hub-and-spoke dispensing model – using a robot to dispense scripts from an automated ‘hub’ before sending them out to ‘spoke’ pharmacies to give to patients – has been in the spotlight this year. Some pharmacists have questioned government assumptions of the model’s superiority, while legal barriers to several pharmacy companies sharing a hub have still not been overcome.

But Mayberry Pharmacy Group was an early adopter of the model, and has used it for five years to great success. The company estimates it dispensed up to 70% of its prescriptions in this way in 2016, leaving its pharmacists with more time to spend with patients “where they can make a positive difference”, says Mr Mayberry.

It’s this ethos that underpins the whole way the company operates – delegating as much work as possible to a robot, so staff can focus on offering patients their clinical expertise.

In its award entry for this category,  the Mayberry Group highlighted how technology has proven beneficial to the company in more subtle ways, too. It uses data analytics to target specific groups of patients, allowing each pharmacy team to be “proactive rather than reactive” when it comes to improving health outcomes.

Any job that can be made easier by technology is given a technological solution. For example, buying medicines is simplified through special software, stock control is automated, and an app streamlines prescription deliveries.

The Mayberry Group has also enthusiastically embraced social media. It credits this platform with the success of its smoking cessation programme, which saw a 400% increase in patient uptake between April 2014 and March 2015.

Delegating the dispensing process means staff can focus their energies on providing services. Hardly surprising then, that every Mayberry branch managed to complete 400 medicines use reviews (MURs) in 2014-15, while some managed up to 100 discharge medicines reviews and signed up patients to their repeat prescription service at a rate of 300 a month.

Naturally, completing these services adds to the company’s bottom line, but Mr Mayberry is quick to point out that it offers tangible benefits to customers, too. Pharmacists now have the time to talk to every patient about whether they understand their condition and how to take their medication. Some of these interactions become MURs, but most are unremunerated “brief [conversations] to make sure everything is OK”, he stresses.

“The patients realise that we are not just giving them a dispensing service, but a pharmaceutical service, which they appreciate. Word spreads and we get more people coming in to partake in our services,” he explains.

Mayberry pharmacists are not only able to exercise their clinical know-how, but have their say in the business’s future direction. The company’s relatively small size means it is able to produce “bespoke” services tailored to each branch, and pharmacists are encouraged to feed back about services that they enjoy.

Be prudent about managing teams

It’s not just the Mayberry Group’s pharmacists that are encouraged to shine. Mr Mayberry points out that every member of the pharmacy team is motivated to make the most of their clinical ability. Accuracy checking technicians take control of running the dispensaries, and “mundane” tasks such as day-to-day dispensing are passed on to the automated system.

It’s all underpinned by a Welsh ethos of prudent healthcare. “We say that any health professional should be working at the top of their clinical expertise, and anything that can be delegated to someone else is delegated,” Mr Mayberry explains.

This helps to streamline workflow, but also ensures that all members of the team feel valued and that their days are “challenging and interesting”, no matter what their role.

This empowering way of working is underpinned by comprehensive training.

All staff are given a thorough grounding in how Mayberry pharmacies work, but are also motivated to “take on as many courses as they wish”, Mr Mayberry says.

For example, medicines counter assistants are encouraged to “move up through the ranks” and train to become registered technicians.

Mr Mayberry’s belief in the importance of each role within the pharmacy team was recognised when he was asked to speak at a Association of Pharmacy Technicians UK event last month. He used his presentation to describe the work he has done to encourage his technicians to take on a wider range of duties in the pharmacy, and in turn was inspired by accounts of how others are pushing the envelope.

“There were some fantastic stories there about what technicians are doing. That made me come back with renewed vigour with our team to encourage them to take on more, so that they feel more satisfied with their jobs,” he says.

Outside of the pharmacy, other local healthcare professionals have also benefitted from the Mayberry Group’s services.

The seven branches encourage patients on regular medication to move to the repeat dispensing scheme and refer them to their GPs. The company’s repeat prescription service saves a “huge” amount of doctors’ time, according to Mr Mayberry.

And while competition over funding means pharmacists and GPs sometimes have a strained relationship when it comes to delivering flu jabs, the Mayberry Group collaborates with local surgeries to deliver vaccinations to under-65s in at-risk groups – not just patients who can be relied upon to attend their GP’s surgeries.

The company has also found an opportune recipient of Mayberry’s MediPack medicines adherence product – a box containing pouches of a patient’s daily medicines, in the order that they must be taken – in local care homes.

Once the group realised that 40% of a local care home manager’s workload was due to medication errors, it offered to provide all care agency users in South East Wales with MediPacks, making it easier for patients to take their medication by themselves.

It’s just another example of how everything the Mayberry Group does is designed to benefit patients.

“First and foremost, it’s instilled in our team that it’s all about the patient,” Mr Mayberry says. “Now that we’ve freed up our pharmacists to spend time with the patient, it’s not all about the [dispensing] volume.”

This, he says, “adds greatly to pharmacists’ job satisfaction”. As does praise and recognition from peers – and there’s no better way to receive this than entering the C+D Awards 2017.

Could you win the C+D Independent Pharmacy of the Year Award this time? Go to chemistanddruggist.co.uk/awards to register.

Pick the category you wish to enter and complete the secure entry form. You can edit and save your entry before submitting it. Good luck!