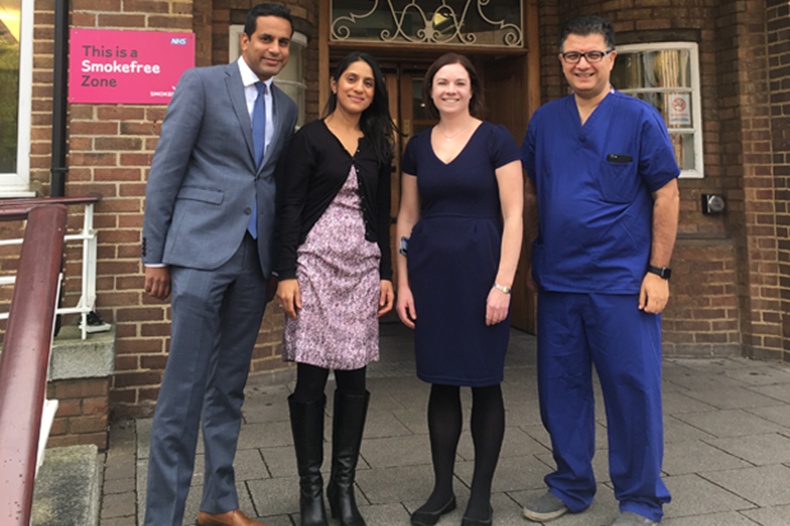 It isn’t often that a community pharmacist and a consultant cardiologist are sat side by side as colleagues. But this is just one of the achievements of Capture AF – along with winning the 2017 C+D Award for Health Initiative of the Year.

The charity AF Association estimates that atrial fibrillation (AF) affects over one million people in the UK, and is most common in the over 65 age group – so the Capture AF scheme targeted these patients.

The project’s aim was threefold: increase the detection of undiagnosed AF, improve anticoagulation prescribing in undiagnosed patients, and facilitate early referrals to the specialist centre at the Harefield Hospital in Hillingdon, London.

The collaborative outreach scheme involved 10 community pharmacies in Hillingdon, London and the Royal Brompton and Harefield NHS Foundation Trust’s specialist arrhythmia care team, working together to refer and treat patients. In the six month-long data collection phase of the project, the team tested 600 patients for AF, and there are plans to roll it out to reach 3,000 patients across 30 pharmacies.

Getting the project off the ground

Sally Manning, lead arrhythmia pharmacist at the trust, explains that she wanted to create a project involving community pharmacists.

“It was on a piece of scrap paper initially,” she says. “There were other projects where GPs were looking at detecting AF, and it made me think it was something that community pharmacists could be involved in.”

She then took the idea to Dr Wajid Hussain, consultant cardiologist and clinical governance lead for the arrhythmia care group at the Royal Brompton and Harefield hospitals.

“I thought it was a great idea,” Dr Hussain tells C+D. “It ticked a lot of boxes, helped extend [Ms Manning’s] role into research, extended our links to the community, and most importantly, helped patients.

“One of the big problems [with AF] is under detection,” he says. “Why wouldn’t we do it?”

Ms Manning applied for a grant from charity The Health Foundation – which Dr Hussain describes as “not an inconsiderable feat”. The scheme was awarded £70,000, which Ms Manning says recognised the strength of the project.

Shortly after this, Zainab Khanbhai – a senior pharmacist at the trust – came on board as Capture AF project lead, and Rikin Patel, a community pharmacist and vice-chair of Hillingdon local pharmaceutical committee, was approached.

“Originally we were [going to] work with pharmacists in North Hillingdon, but we realised we needed to broaden the scope,” Ms Khanbhai explains.

Mr Patel says: “Sally made contact with me fairly early on to see if this would work in community pharmacy and I thought, yes, we can make this work. [She] did all the hard work in terms of getting the funding, and we thrashed out the logistics of it in the community pharmacies.”

Ms Manning describes how the team was “inundated with people coming forward”, who thought it was a great idea and wanted to get involved.

“One of the things that has been a real eye-opener for me was the enthusiasm of the community pharmacists,” Dr Hussain says. “My thought process, which was incorrect, was that they are [only] business owners.”

“The first meeting we had was remarkable,” he says. “Up until then, I had been a bit sceptical. I went to that meeting and saw how keen the pharmacists were – it has been amazing actually.”

In order to attract patients, the team produced an eye-catching poster to display in pharmacies (see below), and trained 10 community pharmacists to undertake the screening. 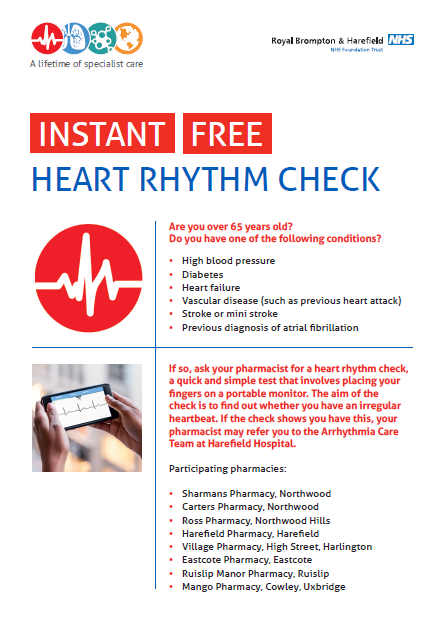 “[The pharmacists] had training from Sally and myself regarding AF symptoms [and] how to detect it, and how to use the cardio monitor,” says Ms Khanbhai. “We had a community pharmacy working group, and we were quite involved in the training from the beginning.”

The screening test itself involves using an app and a mobile electrocardiogram (ECG) recorder, which Dr Hussain says is “very acceptable for patients”, as they simply place their thumbs on the recorder.

“There are no blood tests,” he points out, and it also differs from ECG screens, where people sometimes “have to take their clothes off, which is off-putting”.

What were the challenges?

Despite the simplicity of the test, the project was not without challenges, specifically around confidentiality and data protection. “There were a lot of challenges around sending data from primary care across to secondary care,” says Ms Manning.

Ms Khanbhai expands: “We needed [patient data] sent across to us in a certain way.” The solution came when the team discovered that “PharmOutcomes could pseudonymise the data”.

For example, a patient’s date of birth was changed to their age and their name into their initials. This meant "we could figure out who they were [just] by having those details".

The ECG reading was sent via NHS email, but this presented another problem, as not all community pharmacies have an NHS email account.

“The IT was a real challenge,” says Dr Hussain. “It’s crazy [pharmacists] don’t have a secure way of electronic transfer. The data was simple and straightforward.”

However, despite having to navigate tricky IT issues, the team tested 600 patients, and detected possible signs of AF in 54 people. From this cohort, 15 patients were eventually diagnosed with AF – most of whom did not display any symptoms that would have enabled the condition to be spotted otherwise. 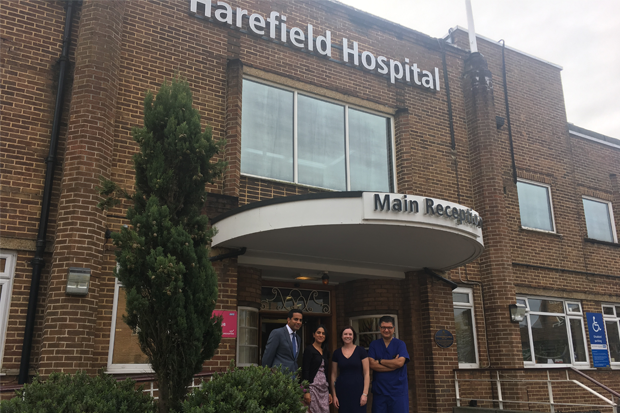 The scheme was so successful that plans to upscale the project are already well underway – with the aim of launching by early 2018.

Ms Manning says “we have been awarded a grant of £100,000 to continue”, along with NHS funding for the cardio monitors.

Dr Hussain explains that the principles will be the same as the original Capture AF project: a “tight interface” between community pharmacists and the arrhythmia team in order to make a streamlined path for the patient.

However, there will be some differences, which will draw even more on the clinical expertise within community pharmacy. “We will be focused on adherence this time around,” Ms Khanbhai explains. In the extended project, patients will be referred back to their community pharmacist for a medicines use review.

Dr Hussain says: “We know that people who stop taking their medicines have a much higher risk of stroke.”

“That is where community pharmacists are well-placed,” says Mr Patel. “Patients are given the opportunity to discuss their medication.”

“We are hoping it will spread,” Dr Hussain adds. “It’s such an obviously good thing – why didn’t someone do this before?”